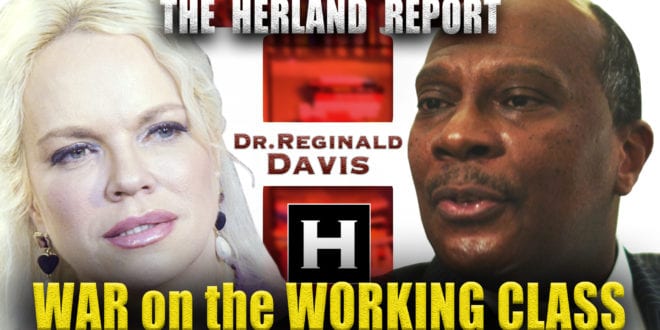 “The ruling elite have to try to get the masses to believe that their ideology is right, that they are at the top and you are at the bottom, and this is how God wants it. The elite always wants to keep the money at the top in order to control the working class at the bottom.”

“We also see a significant decline of the middle-class, ” says Dr. Reginald Davis, professor at multiple universities, author, frequent radio guest and lecturer all over America, pastor of the historic First Baptist Church in Virginia.

In a series of Herland Report TV interviews, we are speaking to some of the leading voices in the US about what went wrong with American culture. The superpower used to be known for being a multiracial society where people were unified by American national identity, today society is disintegrating and fractured into sub-groups based on race, religion, gender and class. What changed in America?

TV Interview with Reginald Davis: War on the Working Class: “Look, we live in a time where we have the technology to see things from the moon and everywhere, and we know what is coming into this country that the government knows about.”

“The question then becomes, why don’t they stop it? Many times, the people cannot direct their energy towards the cause of why they suffer. So, they take the anger home, on their children, on the community, in the family and they take the drugs to escape the reality of a hopeless situation.”

“So, that is why the church has to get involved and connect with other groups that understand that we are in an oppressive situation. This is not only about color, this is about economics.”

“It is about your lifestyle and about being dominated by the ruling elites who are constantly thinking about how to stay on top.”

TV Interview with Reginald Davis: War on the Working Class: “We are looking at the disintegration of the American society. The values that we used to have years ago are near to none today. There are efforts done now to divide the country. We are no longer that United States by practice, we still are united by name, but in practice we are the divided nation of America.”

“We are divided along the lines of politics, socially, economically, religion – along all the lines that should unite us and make the Constitution work as how it was meant to be, these elements are now working against us.”

“When you do not have leaders who are pushing for the unity of the people and for the unity among the diversity, you are going to have a break-down in your country. And that is what is happening in America today.”

“This system of some at the top and the rest at the bottom do not mind making some changes. But they will make sure that the gap will not be removed. We talk about trickle-down-economics, but it never trickles down. The elite always wants to keep the money at the top in order to control the working class at the bottom.”

“We also see a significant decline in the middle-class, and that is because the super-rich want to remain in power and dominate. When you have greed elevated in a system, you will have all kinds of manipulations going on.”

TV Interview with Reginald Davis: War on the Working Class: The Herland Report is a Scandinavian news site, TV channel on YouTube and Podcasts reaching millions yearly. Founded by historian and author, Hanne Nabintu Herland, it is a great place to watch interviews and read the work of leading intellectuals, thought leaders, authors and activists from across the political spectrum.  Follow the trend and subscribe to our newsletter!

The Herland Report is founded by Hanne Nabintu Herland, a Scandinavian historian of comparative religions, bestselling author, commentator and TV producer, known from the media for sharp analysis and fearless speech. She was born and raised in Africa, has lived in Europe, South America, in the Middle East, and traveled extensively in Asia.