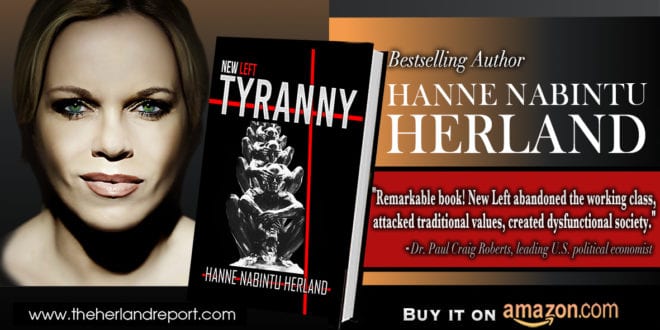 Herland Report: Universities as Propaganda Outlets: The universities have become the main halls of the neo-Marxist, progressive propaganda that engulfs society and creates anarchy.

This is where students learn not to think freely, not to respect the historical traditions that built the West as a strong civilization.

As the young are inexperienced, they become the best subjects to indoctrinate. Without much life experience, the milennials are easily duped into thinking that freedom means an authoritarian push to end democracy and impose totalitarian control.

The lack of respect for diversity is remarkable and in line with the Soviet model that quenched free thought in the Communist system.

It is at the universities that they young they to despise the traditional values that once made us great. The traditional family is despised, religion is despised, values and morality is despised – and virtues with it. Who says you should not steal? Not lie? Not covet that which is not yours?

What is loyalty, fidelity, prudence, patience, humility, reverence of God nowadays, but despised values regarded as old-fashioned relics from a pre-hedonist era we do not want to be associated with.

Universities are rather where the young are taught how to become obedient to the New Left elites who seem to aim at destroying diversity, plurality and the respect for religious freedom, writes historian Hanne Herland at The Christian Post, USA.

Thinkers like Herbert Marcuse, the father of the New Left student revolution in the 1960’s, speaks openly in A critique of pure tolerance about the need to oppress the views of the majority population in order to succeed in revolutionizing the culture.

Marcuse’s illiberal words reveal the authoritarian New Left pursuit, stating that repressing the worldview of the majority is necessary in order to achieve the desired goal of breaking down the Western value system.

Universities as Propaganda Outlets: Let’s take a closer look at how the university systems tend to work. To a much larger degree than many think, the professors’ teaching effectively color the minds of the young ideologically into having a certain world view. It is no news that research often relies on purely subjective assumptions.

Historian and philosopher of science, Thomas S. Kuhn garnered attention in the 1960s when he showed how subjective much of the research at universities really is.

The dominant world view strongly influences the opinions of professors and students alike.

The individual scientist is often much more influenced by the ideologies of his time and subjected to a peer-pressure to reach the conclusions that he knows will be applauded. He tends to end up interpreting his subject-matter in line with the trends.

In The Structure of Scientific Revolutions, Kuhn explains that in science, the dominant understanding of reality builds on a series of assumptions.

It becomes the intellectual’s role to produce evidence that supports the dominant academic consensus, which Kuhn calls the dominant paradigm.

A paradigm, the theoretical framework of a scientific school – the popular way to view the world – may work wonderfully and enable scientists to provide a basis for the scientist to map the pieces of his findings into a system of understanding.

Yet, if paradigms are inadequate, they end up making wrong assumptions, and its conclusions, in turn, fail. They come to the wrong conclusions.

Universities as Propaganda Outlets: Kuhn points out that the role of the oppositional intellectual is to challenge the ruling paradigm and break the logjam of politically correct assumptions.

If no one dares break out of the deadlock, and nobody poses critical questions in order to examine the current hypothesis’, the quality of intellectual thinking is steadily reduced.

The end result is a totalitarian system in which the professor’s job is no longer to examine the evidence, but to present arguments that support the ideas of the current elites.

Indeed, others before Kuhn had studied the problem of twisting history in order to make it better fit the ruling paradigms.

In the 1600s, Francis Bacon complained in Novum Organum of the medieval scientist, that he did not sufficiently incorporate a sufficient range of experience in framing his decisions.

The scientist first determined the question and then sought for the answers he wished for, Bacon said, those answers that fit his assumptions, to begin with. He stated that a scientist’s method too often ended up bending the evidence to suit his own ideology or preference.

It is, for instance, a historical fact that the Early Middle Ages was a time when monasteries were the leading intellectual learning sites, educating the elite and providing for the poor and needy.

Yet, modern-day professors have often referred to this age “The Dark Ages.”

It is true that the term also refers to the period after the fall of the Roman Empire onward, yet many regularly use the term when referring to the Early Middle Ages, negatively focusing on the religious world view at the time.

On the other hand, the 1600s is described as the “Age of Enlightenment,” implying that as scientists were questioning God, increasingly critical of traditional religion, looking for other explanations of nature, that would somehow make them more “enlightened” than the previous generations.

There seems to be an underlying need, a hidden agenda, to insinuate that an age of strong religious beliefs automatically was “a dark phase” in European history.

Yet, it was the early Christian medieval thinkers who first enhanced rationality on a large-scale, placing the ability to reason on the same level as faith, stating that both of these qualities lead to knowledge.

The scholastics during the Middle Ages studied nature and the cosmos in order to understand God better, and strongly emphasized the need for rationality. They laid the foundation for the later study of modern science and order in nature.

Professors and intellectuals who should have defended fearless speech, instead become puppets of an academic elite, rather than being critical voices, posing questions to those in power.

If critical voices are silenced, and open discussions cease, scientific research itself glides into an apathetic self-confirming state. This becomes, as Harvard professor Harvey Mansfield puts it – a subtle form of tyranny, a soft despotism.

Hanne Nabintu Herland is a historian of religions and bestselling author. She is the founder of The Herland Report Scandinavian news site, TV channel on YouTube and Podcasts which have millions of readers/viewers yearly. This is a great place to watch interviews with leading intellectuals, thought leaders from across the political spectrum. Herland’s books include Respect, Det Nye Babylon, The Culture War. How the West lost its Greatness, and her latest, New Left Tyranny. The Authoritarian Destruction of Our Way of Life is available on Amazon, Barnes and Noble, across the USA and in 60 countries world-wide. New Left Tyranny shows how the neo-Marxist New Left turned their back on historical Western principles and became a destructive authoritarian force. www.theherlandreport.com
Previous PODCAST Paul Craig Roberts: No independent governments in Europe, Washington owns them
Next TV interview with Woodley Auguste: Identity Politics creates Destructive Disunity