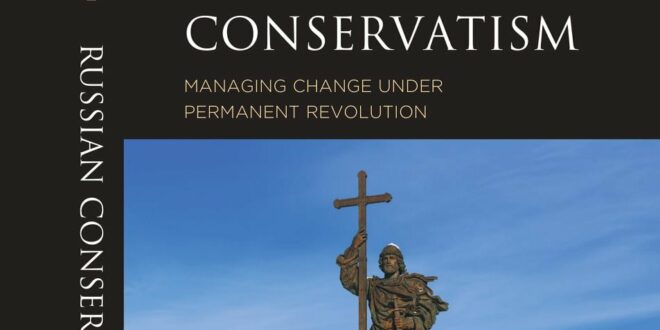 The Return of Russian Conservatism after Century of Socialism – Liberalism: Important book by Glenn Diesen

Herland Report: An important book by professor Glenn Diesen – Russian Conservatism. Managing change under Permanent Revolution gives new insight into Russian conservatism which is making a forceful return after a century of experimenting with socialism and liberalism. BUY it here!

Conservatism is about managing change by ensuring that modernization evolves organically by building on the past.

Conservatism has a natural attraction for Russia as its thousand-year long history is largely characterized by revolutionary change – the destructive process of uprooting the past to give way to modernity.

Glenn Diesen is Professor at the University of South-Eastern Norway, and a former professor at Higher School of Economics, Moscow, Russia.

About the book: A remarkably well researched and intellectually persuasive book.

Glenn Diesen manages to elegantly avoid biases of Russian and foreign authors writing on the subject.

And it is highly relevant in the times of the unleashing struggle to fill the ideological void created by evaporation of communism and liberalism. A must reading for Russian intellectual class, too.”

Glenn Diesen’s other books are: Great Power Politics in the Fourth Industrial Rivalry: The Geoeconomics of Technological Sovereignty (2021); Russia in a Changing World (2020); The Decay of Western Civilisation and Resurgence of Russia: Between Gemeinschaft and Gesellschaft (2018); Russia’s Geoeconomic Strategy for a Greater Eurasia (2017); and EU and NATO relations with Russia: After the collapse of the Soviet Union (2015).

Important book by Glenn Diesen – Russian Conservatism forceful return after century of Socialism: Navigating towards gradual and organic modernization has been a key struggle ever since the Mongols invaded in the early 13th century and decoupled Russia from Europe and the arteries of international trade.

Russian history has consisted of avoiding revolutions that are either caused by falling behind on modernization or making great leaps forward that disrupts socio-economic and political traditions.

Russian conservatives are now tasked with harmonizing the conservative ideas of the 19th century with the revolutionary changes that shaped Russia in the 20th century.

The rise of Asia now provides new opportunities as it enables Russia to overcome its fixation on the West and develop a unique Russian path towards modernization that harmonizes its Eurasian geography and history.

There is nothing more revolutionary in Russia than conservatism – the evolutionary adaptation to change and necessity. This paradox lies at the heart of Diesen’s original and challenging study. He analyses how Russian conservatism is developing in the context of restoring political subjectivity to Eurasia and the emergence of post-Western ideas of modernity. This is an essential contribution to important debates.

A long-awaited comprehensive study of the genesis, historical evolution and modern manifestations of the Russian conservatism. The author did a great job in demystifying the conservative mindset in Russia and in explaining its spectacular resilience.

The author’s detailed scientific work presents the historical evolution and role of Russian conservatism to explain the continued relevance of traditional Russian civilizational ideas. Deserving of special attention, the author concludes that contemporary conservatism intensifies competition between various civilization projects, which marks the return to Russia’s pre-revolutionary interpretations of its metaphysical place and role in the world – as a possible saviour of Europe (the West) from the inevitable catastrophic consequences of the universalist model of economic, political and social development.