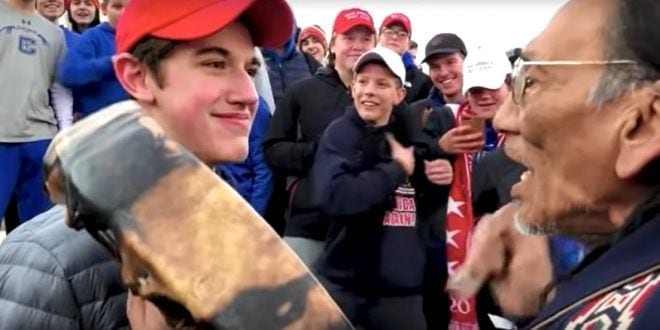 Anti-White America is the New Normal: The Covington Scandal, WND

Anti-White America: The Liberal progressive obsession with race – the idiotic notion that being right or wrong corresponds to a person’s skin color – is now also overflooding the Liberal West.

It has been efficiently tried out in South Africa. Ever since Marxist ANC took over with Western help, racism against white citizens has exploded in the country.

The Identity Politics’ narrative, which stems from the misguided Liberal progressivism in the 1960s, tend to assume that when people of darker skin color react, they are always right and should be applauded; while individuals of whiter skin colors always are the perpetrators.

Thus, if injustice in the past is to be leveled, the white man should be blamed for everything that went wrong, writes historian, author and founder of The Herland Report, Hanne Herland at WND.

Ever since this doctrine was implemented in South Africa, hundreds of thousands of whites have left the country, emigrating to New Zealand, Mosambique, South America and other destinations.

As president Cyril Ramaphosa recently opened up for amending the Constitution for land expropriation without compensation from white South Africans, he effectively made it legal for black people to steal the land of farmers with impunity.

White South Africans have been in Africa since as early as the 1500s, and are now forcefully removed as their property rights are withdrawn.

Many blacks are openly calling for “the killing of whites”. The Liberal mainstream media, following the Identity Politics’ narrative, of course hardly reports on the issue.

Marxist ANC is following in the footsteps of Robert Mugabe, the notorious president of Zimbabwe who also forced the highly skilled white farmers out of his country, with the detrimental effect of the economy collapsing.

Mugabe later admitted that his land reform was deeply flawed, as poor, black farmers without the skills on how to run large scale agricultural projects took over. Zimbabwe is now trying to get them back.

The Covington scandal may be one of the worst demonstrations of racism against whites in the US in a long time. The mainstream media automatically judged that “the white, heterosexual, Christian boys, wearing MAGA hats” were to blame, and did not even bother to check the facts. According to the Liberal narrative, the white skin color was all the evidence needed to attack.

Dr. Paul Craig Roberts recently pointed out in a Herland Report TV Show, that Identity Politics, which the Liberals so passionately embrace, has appointed new exploiter group to be the “white heterosexual males.”

They are, by the way, completely defenseless and not protected by any quotas, prohibitions against hate speech or hate crimes.

You can say anything about a white heterosexual male, Roberts states, but you can’t say the slightest thing about blacks, homosexuals, Hispanics or women.

Anti-White America Covington Scandal: He expanded the argument: The whole notion of class conflict has been replaced by gender, race and sexual preference conflict.

In the Covington scandal, the media, having ticked off all the boxes for sub-groups in society that currently have no protection whatsoever, – white, male, Christian, Trump supporter – Twitter rants read all kinds of threats and violent suggestions that wished the Catholic boys dead, bombed, their school destroyed and so on.

We welcome the letters from Covington’ Nick Sandmann’s lawyers, preparing for defamation lawsuits. The video about the boys version of the story, corroborated with video clips from the scene, shows quite another story.

Here is the hypocrisy from the broadly “white mainstream media”: None addressed the group of four black Hebrew Israelites’ who, as may be heard in the video, abused both the white boys, the native Americans and others who happened to pass by. The native Americans were addressed in a remarkably rude and racist way.

Why the attack on the white Catholics who offended nobody – only smiled – and no mention of the ugly language from the Black Hebrew Israelites?

We suspect the American progressive mainstream media outlets would never dare to create the same type of national lynching mode against the black Hebrew Israelites as they did with the young white boys. Note that racism is judging someone based on his skin color alone.

As it even turns out, the native American Indian who wore the drum, is reportedly known to be a notorious liar.

The man was never a Vietnam veteran, although this has been his claim in media reports. Is he protected from criticism due to his skin color and identity as a native?

The traditional, Western principle of equality regardless of race, creed, ethnic background definitely seems to be a lost principle in America.