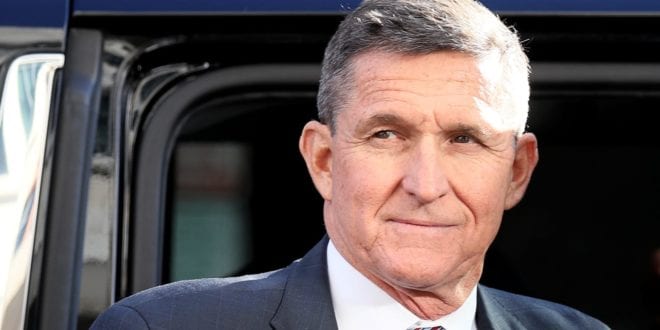 The Case of General Michael Flynn:  The Use of Law as a Political Weapon

Herland Report: The Case of General Michael Flynn:  The Use of Law as a Political Weapon: The audacious corruption of the FBI and the US Department of Justice is demonstrated by their frame-up of the three-star general, former Director of the Defense Intelligence Agency, and National Security Adviser to President Donald Trump.

US Department of Justice (DOJ) documents that the department was forced to turn over to General Michael Flynn’s attorney reveal that the FBI found no wrongdoing by Flynn in its investigation of him and recommended the investigation be closed.

Corrupt FBI official Peter Strzok, a leader of the anti-Trumb cabal in the FBI, intervened. Strzok convinced the official managing the investigation not to close the case as it was the wishes of the “7th floor” (top FBI officials) to keep the case open, writes Dr. Paul Craig Roberts, a leading political economist and regular contributor to The Herland Report.

Dr. Roberts is widely known as one of the West’s most important intellectuals. He is a regular contributor to The Herland Report TV. The programs with Dr. Roberts may be viewed here: Program 1:
Neo-Con Totalitarianism, program 2: Totalitarianism in the West, program 3: The Washington Tyranny, program 4: The Hatred of the White, Hetero Male.

The Case of General Michael Flynn:  The Use of Law as a Political Weapon: In the absence of evidence against Flynn, released FBI documents prove that the FBI leadership decided to frame General Flynn. The documents reveal that the FBI’s plan is “to get him (Flynn) to lie so we can prosecute him or get him fired. . . . we should try to frame them in a way we want.”

General Flynn was forced to incriminate himself with a guilty plea. Otherwise, the corrupt DOJ prosecutors threatened to indict Flynn’s son.

The Case of General Michael Flynn:  The Use of Law as a Political Weapon: When this proof of egregious government misconduct came to light, the DOJ had no choice but to drop the case against General Flynn.

Otherwise it would be clear that law in the US is a weapon in the hands of government. This would mean that control of government would be a life and death matter for the two political parties as it is in Ecuador and Bolivia where incoming presidents arrest or attempt to arrest outgoing presidents.

But we didn’t hear a word about the frame-up of General Flynn from the corrupt presstitutes.  On May 7 the editorial board of the New York Times published the largest and most egregious collection of lies in the entire history of the disreputable organization.

The editorial— “Don’t Forget, Michael Flynn Pleaded Guillty. Twice.” —claimed the lies coerced from Flynn proved Flynn’s guilt, and that Attorney General William Barr is a “personal fixer for the president” and used the Department of Justice to protect friends and to go after political enemies.

The New York Times has it backwards. Going after political enemies is precisely what the Obama Regime’s concocted case against General Flynn (and Trump) was all about.

Remember, it was General Flynn who said on television that it was a “willful decision” of the Obama Regime to send the mercenary jihadists to attack Syria, a decision Obama made in the face of contrary advice by General Flynn, Director of the Defense Intelligence Agency.

When Flynn revealed this, it blew up the fake news story spread by the Obama Regime and the presstitutes that the Obama-supported invasion of Syria by CIA mercenaries was an uprising by Syrian moderates fighting for democracy.

Obama’s role in the frame-up of Flynn and the orchestration of the Russiagate hoax is now coming to light, making the former president nervous.

On May 10 the Wall Street Journal editorial board asked if Obama’s nerves are getting in the way of his judgment:

“Barack Obama is a lawyer, so it was stunning to read that he ventured into the Michael Flynn case in a way that misstated the supposed crime and ignored the history of his own Administration in targeting Mr. Flynn.

The Case of General Michael Flynn:  The Use of Law as a Political Weapon:  Since the former President chose to offer his legal views when he didn’t need to, we wonder what he’s really worried about.”

The Democrats’ frame-up of General Flynn and their two attempted frame-ups of President Trump show an extraordinary audacity and a corruptly compliant FBI and DOJ.

They thought that they could get away with it, and, of course, they had all the help possible from the New York Times, Washington Post, CNN, MSNBC, and the rest of the presstitute scum for whom lies are the currency of their fake news realm.  The presstitutes have made clear that the US media is devoid of integrity.

After high officials such as James Clapper, Susan Rice, Samatha Power, and others repeatedly claimed evidence of Trump and Flynn’s guilt, when under oath their story changed 180 degrees.  Here is Director of National Intelligence James Clapper:

“I never saw any direct empirical evidence that the Trump campaign or someone in it was plotting/conspiring with the Russians to meddle with the election.”

Susan Rice, Obama’s incompetent National Security Adviser, and Samatha Power, Obama’s Russia-baiting ambassador to the UN, along with the rest of the disreputable Obama cabal, have admitted that they saw no specific evidence of any collusion between Trump and Russia.

The entire thing was an orchestrated hoax that proves beyond all doubt that the Democrat Party and the US media are corrupt beyond redemption.

When the case against Flynn was dropped as a result of the damning evidence of egregious government misconduct in framing a senior official of the US government, the corrupt prosecutors who had prosecuted the innocent Flynn all resigned in a huff, pretending that it was Barr, not them, who used the Department of Justice for self-interested political purpose.

Two Georgetown University law professors, Kean K. Katyal and Joshua A. Geltzer, totally discredited themselves and the Obama contingent in the DOJ, by alleging in the New York Times that the dropped charge against Flynn has resulted in the “utter demoralization” of “the law enforcement community.”

In other words, for these law professors and “the law enforcement community” for which they claim to speak, dropping a case consisting entirely of an orchestrated frame-up, a contrived perjury trap, and threats against family members is demoralizing.

The professors are so thoroughly dishonest that they use the lies coerced from Flynn—the price of his “cooperation with the investigation” in order that his son would not also be framed-up—as “evidence” of Flynn’s guilt and proof of the political use of the Justice Department by Trump and Barr in dropping the contrived case.

The Case of General Michael Flynn:  The Use of Law as a Political Weapon: The frame-up of Flynn is not acknowledged by the law professors as political use of the Justice Department.

Instead the law professors describe the vindication of an innocent man  on the basis of undeniable evidence as political use of the Justice Department.

If this is the kind of law Georgetown University teaches, the law school should be promptly shut down.

The question that demands an answer is how do people as corrupt and devoid of integrity as Comey, Mueller, and Strzok get into top FBI positions?