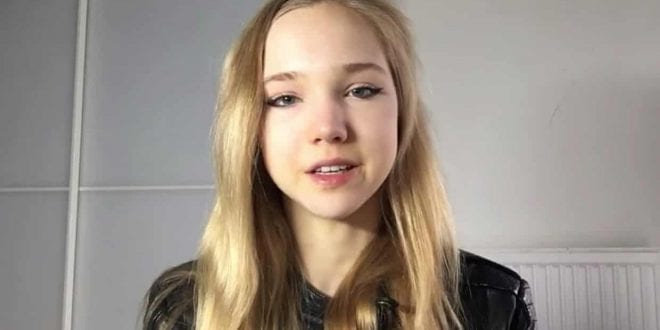 Herland Report: Finally comes climate-realist Naomi Seibt: OK, we get it. Billionaires use rich, white child soldiers like Greta Thunberg to push for divestment in world energy, to profit by the billions once the energy shortage sets in. This is Wall Street 2020.

Greta Thunberg, is a child of Fossil Free, a world wide American organization working to stop investment in the 96 % source of energy we have in the world, fossil fuels.

But everyone knows that only 4 % of world energy currently comes from renewables, according to BP. The market is set for crash. (chart below)

Whoever objects when the privileged rich kids from Europe want to stop world energy, which will produce unspeakable poverty in the third world, is a “misogynist, racist, child hater, far right extremist, anti Islam, homophobic.”

And the rest of the usual New Left rhetoric as they campaign for a globalist, borderless society.

At least, another kid is on the block. Naomi Seibt, 19, works with the Heartland Institute.

It is a libertarian think-tank funded by oil and gas companies and conservative groups, and she is refreshingly open about it.

She was apparently with Donald Trump and Mike Pence over the weekend in the CPAC conference in Washington.

Let us instantly predict that Naomi Seibt quickly will be called a “misogynist, racist, child hater, far right extremist, anti Islam, homophobic” and the rest of the usual New Left rhetoric in the campaigning for the globalist billionaires.

Finally comes climate-realist Naomi Seibt: Since kids now do the talking, Naomi Seibt brings the other arguments that are drowned in the mainstream billionaire owned Greta Thunberg media, saying “I don’t want you to panic. I want you to think.”

She denounces climate alarmism and calls it a despicably anti-human ideology, argues that the predictions of end of the world are exaggerated. Yet, also states that she believes in man-made climate change, but there is little evidence for manmade CO2 emissions having that great of an impact.

“She’s a fantastic voice for free markets and for climate realism,” said James Taylor, director of the Arthur B. Robinson Center for Climate and Environmental Policy at the Heartland Institute.

The Greta Story is remarkable: The media child pushed by global organizations which stated global aim is to ban coal, oil, gas – the only reliable sources of energy that we currently have.

Everyone knows that the world has not yet developed other sources strong enough to serve the world’s need for energy. Who is shorting this and set to gain from the upcoming energy crisis?

It was the American Fossil Free organization’s man in Sweden, Bo Thorén, who suggested the school strike to Greta back in 2018.

It was never even Gretas idea, as he explains in a Sweden Radio P4. Ingmar Renzhog and Bo Thorén and others are strawmen in a much larger game: A remarkably well organized world-wide scheme to end investments in oil and gas, the only reliable source of energy that we currently have.

Finally comes climate-realist Naomi Seibt: You have to almost own the world media to make that happen. And notoriously the US media is over 90 % owned by precisely the same corporations that own big money:

The media’s role has gone from producing information about what happens in the world, to becoming political campaigns for billionaires’ next investment.

In #EndlessWars, in oil as we see now, in pursuing economic gain at the expence of the people.

Neubauer also works for Fossil Free, saying that men have failed as a gender and climate change is the greatest disaster in human history. Who she works for merely proves the massive capital interest behind the Climate Apocalypse effort.

Finally comes climate-realist Naomi Seibt: Greta’s job is to pretend that children rule the world, pushed as a queen by the same billionaire owned mainstream media. So, the world is going under now? In less than ten years?

There seems to be no end to the gullibility of the young masses. You could tell them the world is a cangoroo and they would believe it.

It speaks, of course, for the unbelievably gullible naivite of young people, who believe in the reports written by the same billionaire owned NGOs and think tanks.

Generation after generation falling for the most stupid claims that will “bring utopia”. We are not in reminisce of the New Left neo-Marxist push in the 1960s, which has torn down the very pilar values of stability in the West.

Simply, by looking at the production of wind mills, hydro-power or solar panels, these require massive amounts of fossil fuel to produce, long before they even reach the fields where they are to operate. From where does the energy in a battery come?

The stoves in the world run on gas, coal or electricity. Houses are heated by the same source of energy.

Not a single car would run without it, not even the so-called “eco-friendly TESLAs,” which could not even be manufactured was it not for plants using fossil fuel, the very electricity used mostly deriving from the oil industry.

Apparently, because that would be the result of turning off the world’s current energy sources.

Hear Bill Gates, who says he is so disappointed in the general public for not seeing through the manipulations. The people are the ones who will suffer for it, not the billionaires, who, one may guess, are having fun.

Gates says: “Take the city of Tokyo with 27 million inhabitants. If the lights went out for three hours, which solar panels or battery solutions would reheat the city, bringing back electricity?” Gates asks.

“Electricity is 25 % of green house emissions. Whenever we came up with the term Green Energy, I think it screwed up people’s minds. I was at this conference in New York where all these financial guys got on stage, saying “We’re going to raid companies in terms of their CO2 outputs, and take out companies that puts of lots of CO2, and financial markets are magical. Suddenly, all the CO2 will be omitted.”

“And I was like: How are you going to make steel? Do you guys on Wall Street have something in your desks that makes steel? Where is fertilizers, cement going to come from?”

“Do planes fly across the sky due to some number you put on a spread sheet? The madness of the so-called “Finance is the Solution”. There is no substitute for the way the industrial economy runs today.”