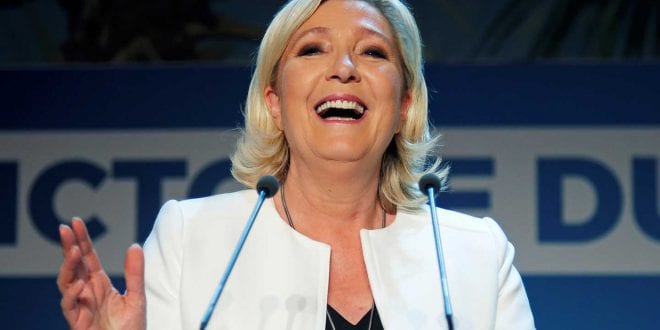 Only Marine Le Pen represents the French people, the rest are Washington puppets

Herland Report: Marine Le Pen is the only candidate for the French presidency who represents France. All the rest represent Washington and the EU.

Today the entire French establishment reports to Washington and does Washington’s will, which is to keep Le Pen out of the presidency of France at all cost, writes Dr. Paul Craig Roberts at The Institute for Political Economy, whose articles will appear regularly on The Herland Report.

Why are the French people so slow to see the obvious facts? France died with Charles de Gaulle. He was the last French president. Washington, of course, hated De Gaulle, because he would not let France be part of the American Empire.

He kept France out of NATO. De Gaulle understood that NATO was unnecessary as a military alliance, as there was no threat of a Soviet invasion of Europe.

NATO was Washington’s way of absorbing Europe into the American empire.

Stalin himself had made it crystal clear that there would be no Soviet invasion when he eliminated the neoconservatives of his time who wanted to establish Soviet hegemony over the world.

“Socialism in one country,” declared Stalin as he killed off the Soviet neoconservatives.

Today the entire French establishment reports to Washington and does Washington’s will, which is to keep Le Pen out of the presidency of France at all cost.

French president Hollande, whose “socialist” party did not manage a sufficient showing to even be a contender for the presidency has asked the outgoing ministers of his government to do everything possible to ensure the defeat of Marine Le Pen on May 7.

The entirety of elite society in Europe depends on Washington’s subsidies and good will, which is always the situation with vassals.

Marine Le Pen is saying that France needs to be an independent country, not a vassal of Washington. For the French elite this means a loss of status and income. For a French politician to represent France is a revolutionary act.

Thus, the French establishment will protect its interests at the expense of France. Le Pen will be defeated, and if not, the CIA will assassinate her.

Marine Le Pen has gained sufficient electoral support to have pushed aside the two traditional French political parties and is one of two candidates for President of France on May 7 has Washington, the EU, and the French elite determined that she be defeated at all costs.

Washington has called out into the Paris streets in protests the American supported NGOs. The EU and the French elites are alleging a misuse of EU funds by Le Pen and are trying to find some loophole through which they can strip Le Pen of her immunity and lock her up.

The outgoing French president, Hollande, a Washington puppet, tries to paint Le Pen as a fascist because she is opposed to France’s domination by Washington, which includes accepting the imposition of millions of refugees from Washington’s wars on the French people.

Le Pen’s opposition to Muslim refugees is presented as a moral defect, but Hollande and Sarkozy’s support of Washington’s illegal wars that have murdered millions of Muslims and produced the refugee flow is portrayed as “standing with Washington against terrorists.”

I think that Washington and the EU elites are in a snit for no reason. The French are as insouciant as the Americans and have little awareness of what serves their interests as opposed to the interests of the French and EU elites.

The elites are trying to discredit this expression of dissatisfaction as illegitimate. In other words, it is a moral defect for a French politician to stand for France.

That is “fascist nationalism.” Standing for Europe and diversity and American domination, that is the only accepted position.