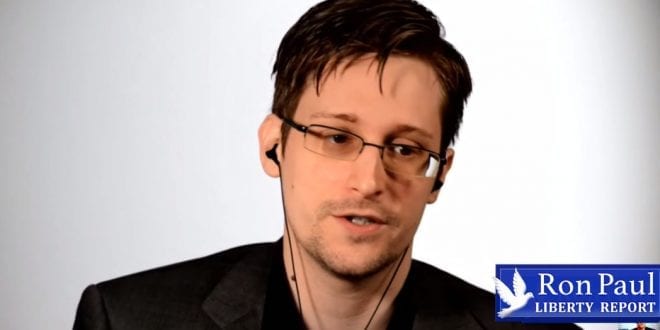 Edward Snowden: The greatest redistribution of power since Industrial Revolution

Herland Report: We are in the middle of the greatest redistribution of wealth and power since the Industrial Revolution, says Edward Snowden.

The only way to safeguard our freedoms is to know when they’re being threatened. Unfortunately, the mainstream media fails to inform us of these threats, instead focusing on celebrity gossip and political punditry.

That is where Freedom Watch comes in, homing in on the gravest threats to our civil liberties and human rights by highlighting news reports and investigative stories that shine a light on the most serious threats to the Constitution and our freedoms, writes constitutional attorney John Whitehead, CEO of The Rutherford Institute.

NSA whistleblower Edward Snowden recently said that people in systems of power have exploited the human desire to connect in order to create systems of mass surveillance.

Snowden appeared at Dalhousie University in Halifax, Nova Scotia via livestream from Moscow to give a keynote address for the Canadian university’s Open Dialogue Series.

Right now, he said, humanity is in a sort of “atomic moment” in the field of computer science. “We’re in the midst of the greatest redistribution of power since the Industrial Revolution, and this is happening because technology has provided a new capability,” Snowden said.

“It’s related to influence that reaches everyone in every place,” he said. “It has no regard for borders. Its reach is unlimited, if you will, but its safeguards are not.”

Without such defenses, technology is able to affect human behavior.

Institutions can “monitor and record private activities of people on a scale that’s broad enough that we can say it’s close to all-powerful,” said Snowden. They do this through “new platforms and algorithms,” through which “they’re able to shift our behavior. In some cases they’re able to predict our decisions—and also nudge them—to different outcomes. And they do this by exploiting the human need for belonging.”

“We don’t sign up for this,” he added, dismissing the notion that people know exactly what they are getting into with social media platforms like Facebook.

“How many of you who have a Facebook account actually read the terms of service?” Snowden asked. “Everything has hundreds and hundreds of pages of legal jargon that we’re not qualified to read and assess—and yet they’re considered to be binding upon us.”

“It is through this sort of unholy connection of technology and sort of an unusual interpretation of contract law,” he continued, “that these institutions have been able to transform this greatest virtue of humanity—which is this desire to interact and to connect and to cooperate and to share—to transform all of that into a weakness.” Read the full article here.