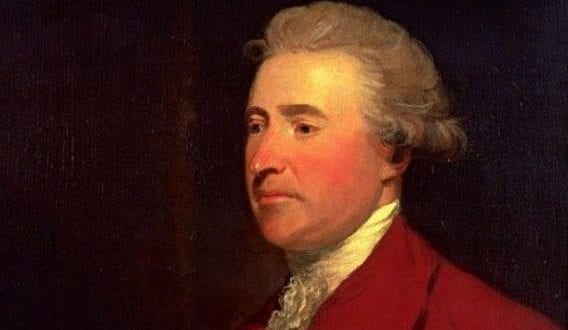 One of Great Britain’s most important politicians and philosophers was Edmund Burke.

Burke spent much of his life explaining why it is important to maintain Europe’s political and moral philosophical traditions, precisely those which made the West such a great civilization.

He spoke of individualism and emphasized the value ​of equality, law and order, as well as focusing on the Protestant work ethic, writes historian and founder of The Herland Report, Hanne Nabintu Herland.

The English philosopher, Edmund Burke, who lived in the 1700s is described by many as the founder of modern conservatism.

He spoke passionately against the ruthlessness of colonialism and advocated for the respect of national sovereignty.

In The Conservative Mind, historian Russel Kirk describes Burke’s strong dislike for the French Revolution, as he fought fiercely against it. In no way, did he want a similar process to take place in England.

In his pamphlet Reflections on the Revolution in France, Burke warned against the effects of dramatically changing the values and structures of society. He warned of democracy itself.

If democracy means rulership by the mob, he stated, the nations are in trouble. He felt that it was vital that leaders were skilled and properly educated, fixed on serving the people, in order for the system to work.

The conservative philosopher Edmund Burke:  Back in the time of the French Revolution, there were definitely those who were critical of what was happening in France.

In England, politicians and intellectuals questioned the rationality of the uprisings, as they watched it unravel in all its horror in Paris and all over the country.

The conservative philosopher Edmund Burke: The Conservative movement in England stated at the time that society needs to maintain laws and regulations, and not too easily fall prey to the passionate call for revolutions.

They spoke of the need for moderate reform in order to avoid the type of anarchy that was plaguing France at the time of the French Revolution in the late 1700s.

Many believed that to keep a certain order is necessary since man has an inherent tendency to exploit others to his own benefit. Man needs to control his selfish desires, whether he is rich or poor, among the elites or among the suppressed, regardless of gender and ethnic background.

Hence the need for an ethical foundation of society to firmly establish respect for the natural diversity which exists in any given society. It was stated that the goal was to avoid anarchy and ensure the right of the individual to live in a society where his welfare was protected and transgressors punished.

To Burke, a society without a hereditary nobility and highly educated and capable elites, lacking an established church and continuous traditions, meant dangerously playing with the very fabric of Western society.

He examined the inherent problems of injustice and abuse of power among the elites but found completely different answers than Karl Marx.

He fervently stated that the radical French philosopher, Jean-Jacques Rousseau was wrong in arguing that the social contract should be between the sovereign state and its people.

Burke referred to the partnership between generations, even incorporating respect for the dead and the yet unborn, as the true source of stability, loyalty, and growth for a nation.

The conservative philosopher Edmund Burke: Burke felt that bloody revolutions, civil wars, and horrors such those experienced by the French, were not the way to go about it.

This would not lead to prosperity and stability. Within the framework of law and order, he sought to reform society gradually rather than rapidly, and stop the abuse of power without heading towards civil war. Until the day he died, he advocated that change is not always for the better.

According to Ian Harris, in The Cambridge Companion to Edmund Burke, Burke firmly believed that religion is one of the main foundational pillars of society.

He criticized deism and atheism and maintained that Christianity was vital to maintain in order to push for social progress, both for man’s soul on the personal level, as well as for political arrangements and the preservation of constitutional and civil liberties.

The idea of ​​limited governmental authority was viewed as essential, the necessity of independent institutions, the need for the secular separation of church and state to ensure a free, democratic society. Burke strongly believed in the liberty of the people and the need to protect them against the political elites’ abuse of power. He felt that only with a full understanding of history, could one avoid repeating mistakes of the past.

Professor at Yale University, David Bromwich points out in The Intellectual Life of Edmund Burke that Burke wished for a society built on trust.

He felt that democracy in its modern form could easily mean the end of the loyalty between the generations and the breaking away of social bonds between family structures and cultural roots.

Burke believed that democracy would lead to new heights of misuse of power, that modern society could end up seeing crimes committed on a terrifying scale precisely under its democratic rule.

The same criticism has later been voiced by intellectuals such as Noam Chomsky.

Burke’s analysis of the French Revolution anticipates the later Russian Revolution of 1917 and the atrocities of the leaders of the Soviet Union, both Lenin at first and Joseph Stalin later, in the 1930s.

Not to mention the time prior to the World War II, which saw Adolf Hitler come to power in a Western democratic nation, heavily controlled by mainstream media propaganda.

The people were silenced by the strict ideology of National Socialist consensus that engulfed Germany at the time.

Burke’s almost prophetic analysis of the future of democracies, makes him a refreshingly different voice to this day.