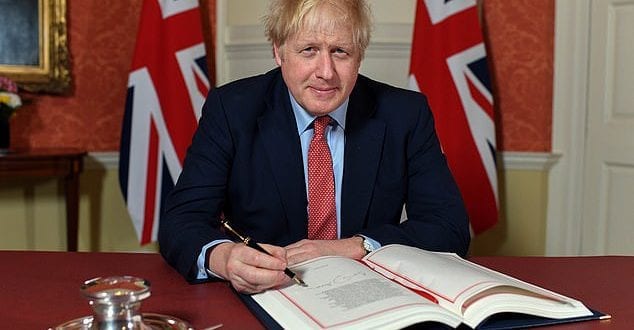 European leaders signed the agreement earlier on Friday, and it was then transported by train to London. The prime minister said that it was time to bring “to an end far too many years of argument and division.” The United Kingdom will officially leave the EU in a week, on January 31st, 2020.

Boris Johnson’s big moment makes him the prime minister who promised the British people to honor the population’s vote for Brexit, he fought the anti-democratic forces and the Labour Party who supported the EU elites in Parliament and won a landslide election victory December 12th, 2019.

Herland Report wrote: The power struggle between the EU  and the British people over who will rule Britain comes to an end in the December 12 election. Let the British rule Great Britain! We support Boris Johnson.

It is with great relief we join the prime minister, Boris Johnson who tweeted in December: “Thank you to everyone across our great country who voted, who volunteered, who stood as candidates. We live in the greatest democracy in the world.” It is a Historic Churchillian moment for Boris Johnson.

Socialism, under the disguise of protecting the worker, provides the best political tool to gain control over a population with its own elite.

“He put Parker pen to paper on the official copy of the Withdrawal Agreement in Downing Street this afternoon, ending months and months of bitter and divisive politics. January 31: The UK will leave the EU at 11pm and enter into a standstill transition period.

The president of the European Commission, Ursula Von Der Leyen, endorsed the Withdrawal Agreement treaty struck between Britain and the bloc at a ceremony in Brussels this morning. December 2020: The end of the transition period and the hard deadline for a trade deal to be completed.”

The signings mark another step in the ratification process, following Parliament’s approval of the Brexit bill earlier this week. The European Parliament will vote on the agreement on 29 January, writes the BBC.