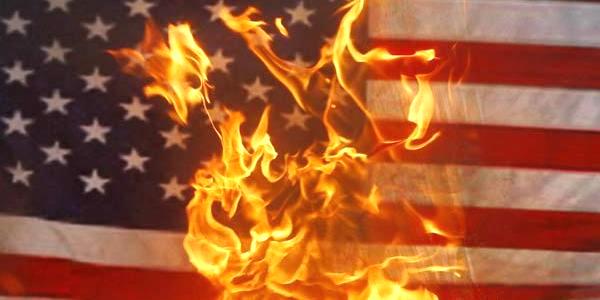 Herland Report: How did the anti-history Cancel Culture movement get so well established that Marxism now is on the verge of taking over the United States’ political system?

How did we get to where a handful of superrich socialist big tech billionaires reportedly steer the USA away from the values that founded the Republic, with full propaganda control and ownership of the media?

How did the new generation Leftwing white Americans end up raging mad with anger, eager to tear down their own culture, shouting “Cancel America” in the streets, while smashing stores and destroying the livelihood of innocent shop owners? Who told them that historical Western values are to be scorned, hated and destroyed?

This asks Hanne Nabintu Herland, historian and founder of The Herland Report in her regular column at World Net Daily.

The answer is that these are the final stages in the neo-Marxist movement goals, which began in the Frankfurt School in Germany post World War II.

Cancel Culture is the final stage of neo-Marxist long term goal – WND: After the war in which National Socialism (NAZI) did not prevail, the founding fathers of the neo-Marxist movement such as Theodor W. Adorno, Herbert Marcuse, Max Horkheimer, Jacques Derrida and others did not change their pre-war Marxist ideology, but only moderated it. (Feature photo: Seattle, Kelly Kline)

In the 1950s, some moved to the United States and began the process of infusing neo-Marxist thought into the university systems.

Cancel Culture is the final stage of neo-Marxist long term goal – WND: The aim was to bring utopia by decontrucing traditional values and radicalizing society away from its historical foundation.

They introduced Critical Theory to Americans and were radical opponents of Christian or religious philosophy.

For example, the neo-Marxist philosopher, Jacques Derrida. He defined the need for a “deconstruction” of traditional values and concepts, based on the belief that every power structure comes in pair: Strong-weak, white-black, man-woman, Westerner versus non-Westerner etc.

His mistake was, as I point out in New Left Tyranny. The Authoritarian Destruction of Our Way of Life that he automatically thought that the power structure remains forever static, it does not change over time. So that “the man” is always above “the woman”, “white” is always above “black” etc.

In Derrida’s racist way of thinking, he ended up teaching that someone’s skin color determines who is right or wrong, strong or weak.

As unbelievable as this seems, the Western 1960s’ youth were eager to embrace this deeply racist theory as they were taught to hate the historical, Western values.

They wanted drugs and rock’n roll. The classical Western concept of equality regardless of race, ethnic origin, gender, creed or class was abandoned. Identity Politics began teaching that race, not qualifications and character matter.

This became the radical goal: To diminish the power of the male, the Caucasian whites, religion, the traditional family and the founding values of society.

Why the neo-Marxists were willing to follow a Critical Race Theory that later was to re-ignite the Nazi notion that good and bad corresponds to somebody’s skin color, is a mystery.

This is this ideology that has been at the root of the 1970s feminism with its focus on the need for women to “hate” men, the demonization of marriage, the biased negative view of the British empire and so on.

The aim of Critical Theory was to pull down the “high and mighty” in order for “the down and out” – defined as those with dark skin colors – to take its place. The Marxist utopia would be reached once “the weak” were to dominate the strong.

Herbert Marcuse, the father of the student rebellion in the 1960s, also a neo-Marxist, speaks about the same: The need to pull down the traditional majority views and actively discriminate against these in order to push for the neo-Marxist take-over.

Cancel Culture is the final stage of neo-Marxist long term goal – WND: He even wrote a book about the importance of repressive tolerance and to actively discriminate against those views that go contrary to the Marxists, in order to force open radical change.

And here we are, over 50 years later in a society where the atheist ideologies have been relentlessly preached at American universities, coloring generations of Americans into thinking that Christianity and traditional values are the worst enemy they are to face.

And now, with the American election still undecided, lawyers are working to determine whether the media hailed victory for Joe Biden was determined by voter fraud.

The alleged fraud was reportedly made possible through backdating mail in ballots, allowing unregistered voters to vote, counting days past the election, and it all systematized by the Hugo Chavez Dominion Smartmatic Voting System, which deleted millions of Trump votes.

And the war is on. Harvard lawyer Alan M. Dershowitz has received emails asking him to demand the disbarment of President Trump’s lawyers. Democrats shockingly state the wish to end the career of those who supported Trump. This is nothing less than pure totalitarian Communism.

If traditional concepts such as trust, honesty, the very values of the Constitution are to be thrown overboard, war certainly is upon us. What we now see is only the neo-Marxist push to deconstruct the trust in traditional Western values come full circle.

It is nothing new, only the final stages of the implementation of the German Critical Theory, the very thoughts that have educated the Antifa millennial into believing that the United States is the worst country on earth.

Previous Did the United States Win the Cold War, or who will?
Next Repeating the mistakes of the Roman Empire: The Fall of the West