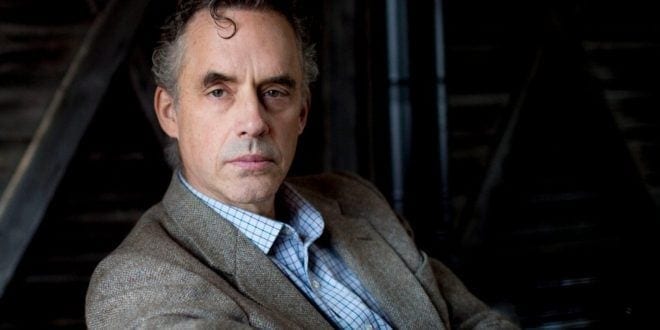 Herland Report: Feminism creates Conflict: Psychologist Jordan Peterson has millions of young, male followers. They all read his bestseller 12 Rules for Life. An Antidote to Chaos and flock to the YouTube channel.

The New Left, atheist gospel preaches with tyrannically high pitch that everything should be permissible and the only thing NOT permissible is to claim that there should be rules in life.

Freedom is now defined as borderlessness, in stark contrast to classical Western values where virtues such as self-discipline, chastity, honesty, faithfulness and self-restrain were central virtues.

Feminism creates Conflict: So, unable as we then are to coach the young towards the right track that will produce a focused, seøf-disciplined and orderly life where one achieves success, finds a good spouse etc. – Jordan Peterson is the answer.

Peterson is again on tour with sold out tickets after just minutes on the market. And we do live in a crazy world.

One of the radical rebel Peterson’s “most appalling and controversial” statements is that gender is biologically determined; women and men are biologically different.

One wonders, but ok. At any rate, a statement like that is highly controversial today.

A quick glance at modern feminism – or the 1970’s feminism’s aim to break down the gender fellowship – may explain how we got here. Needless to say, something went seriously wrong.

There have been sharply different feminist movements in history. The early women’s rights movement fought for equal social and political rights and culminated in the Suffragette movement in the 1920s.

I would argue that the early movement was based on a constructive realism rather than ideology, and produced better results.

Mary Wollstonecraft, who published A Vindication of the Rights of Woman, acknowledged that men and women are different by nature; that the woman is weaker physically and therefore is structured in such a way that she naturally fits into other roles than the man.

The sexes were not viewed as a social construction that needs to be changed. Social misconstructions and lack of respect for womanhood needed change, not the woman herself.

Feminism creates Conflict : The radical-revolutionary movement of the 1960s had completely different goals. It took emancipation far beyond equal political and social rights.

This type of feminism was an ideologically motivated cultural reaction against European traditionalism which ended up attacking the whole foundation upon which the stability of Western society was founded: The family.

It may be argued that this new feminism was a full frontal attack on the traditional role of a woman as part of a family nucleus, an attack on her femininity and on the woman-qualities that characterizes her biologically:

she was to dislike even her childbearing ability, her femininity, the very curves of her body, her abilities to form future citizens as a mother.

The movement arguably ended up producing results that weaken the woman’s self-esteem, rather than strengthening her. This is very evident in, for example, Scandinavia, where I originate from.

Its theory and focus on the woman as “the weak link” has created a whole generation of women who chronically victimize themselves.

They find discrimination everywhere, chronically angry at men, bitter, quick to divorce, eager to label those who disagree with their male hating agenda as “chauvinists”, starkly intolerant of other women who view the world from a non-feminist 1960s perspective.

Feminism creates Conflict: Maybe the greatest weakness of this radical feminist movement was the assumption that freedom and independence require the woman to step out of the fellowship of men.

By disentangling her from the dependency on others – the interdependence that connects us all – freedom became her right to tend to her egoism alone.

Betty Friedan, the founder of American feminism, called it “the problem that has no name,” suggesting that which defined the traditional woman – such as her husband, her children, her work and her home – was the precise problem that limited her.

In The Feminine Mystique published in 1963, she spoke of the discontentment of women who “wanted more” – more than what they already had.

Radical feminism chose its strategy: to urge a whole generation of women to step out of the family bonds and marriage. Ironically, this was at a time in history where women’s living standards were higher than ever.

Suburbia was never richer. Alas, we live in the aftermath of this misguided feminism today that has taught women how to hate the man. So, thank God for Jordan Peterson.