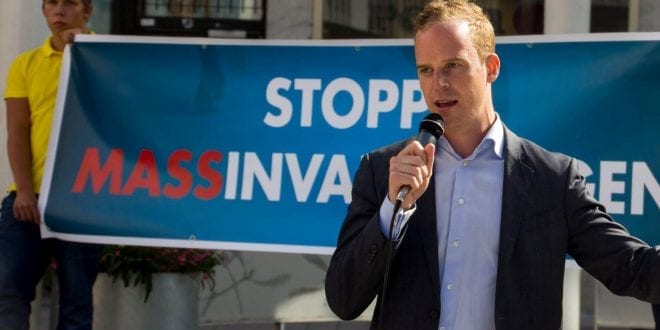 Low Intensive Civil War in Sweden: All you read about Sweden is true – Gustav Kasselstrand

The horror stories from Sweden are many, and steadily growing worse. Although the country’s politicians chronically attempt to pretend that nothing much is wrong, the stories from Malmø, Gøteborg, Rinkeby and so on seem hard to hide.

Sweden has been one of the more liberal nations in Europe, openly advocating for free immigration from third-world countries. As the multicultural dream did not turn out to create a utopian society, the Swedes now are struggling.

Voice of Europe recently published an interview with Gustav Kasselstrand, the leader of Alternative for Sweden party, a break off party from Sweden Democrats, who might win majority in the next election. Read excerpts below.

Gustav Kasselstrand is the leader of the newly founded Alternative for Sweden party(Alternativ för Sverige). He holds a bachelor’s degree in economics from the University of Gothenburg and an MBA from Aalto University in Helsinki (Finland). He also studied in Germany and Singapore. Kasselstrand is 30 years old and has been politically engaged since 2006, when he joined the Sweden Democrats, which at that time was a small party with a support of 2-3% in the polls.

– How bad are things in Sweden?

Gustav Kasselstrand: – It is very bad. What you read about Sweden on alternative news platforms is true. We are facing problems more severe than ever before in our history, where Swedes face a situation of being a minority within 20 years if nothing is done to stop the replacement of our people.

I would describe the problems in Sweden as some kind of low-intensive civil war (with gradually increasing intensity for each day). What makes the situation even more difficult is of course the extreme political correctness that has haunted Sweden for decades, but which is now finally breaking up. The political establishment is both unwilling and unable to do anything about the problems. It’s all talk and no action.

The situation has gone so far that the politically correct people lose ground and we are entering a state of retribution against politicians and media who bear the responsibility for turning my previously peaceful and prosperous country into a real mess, which is now used as a warning example for other Nordic and European countries, yes, even for countries all over the world.

The political establishment is both unwilling and unable to do anything about the problems. It’s all talk and no action. They are the cause of the problems and simply need to be replaced for Sweden to be able to recover.

Sweden needs a new force in the parliament, a party that makes sure that the Sweden Democrats get back to their oppositional role towards the olds parties.

So despite the mess we are in, we are now seeing a tremendously interesting development in Sweden. The Sweden Democrats, which I still have sympathy for, is rising in the polls and will reach an all-time-high election result in September, continuing to change the paradigm.

That’s good, but it is not enough – they have become more and more passive, politically correct and similar to the established parties. Sweden needs a new force in the parliament, a party that makes sure that the Sweden Democrats get back to their oppositional role towards the olds parties. The only party that can do this is Alternative for Sweden.

– A lot of people think Sweden is lost, what would you say to them?

Gustav Kasselstrand: – I completely disagree. No country is ever lost if there are people within that country ready to provide resistance and offer another way forward. The truth is that many Swedes are just starting to realise what is going on in their country.

If you look ten years back and compare to today, sure the immigration problems have become many times worse, but we also have a vital and strong patriotic movement now in Sweden, both parliamentary and on social media, alternative news sites and other platforms.

The Swedish elections later this year is not the “last chance” to save Sweden. It is the first chance!

Swedes and other European peoples should look to the past for inspiration. We have always faced great dangers and obstacles throughout our history.

Europeans of the past who said “it is lost” when Arabs occupied much of modern day Spain or when Turks besieged Vienna or when Mongols controlled most of eastern Europe where not the ones who came to define our history. They were wrong in the past and they are wrong today.

Most Europeans are only now becoming aware of what is going on. Far from being lost, our struggle, our “Reconquista”, has only just begun. And those who are “black-pilling” and claiming everything is lost before the game have even started should step aside and make way for those of us who know better.

The Swedish elections later this year is not the “last chance” to save Sweden. It is the first chance! The fight for Sweden and for Europe is now starting. Let me refer to the Polish National anthem with its famous first words: “Poland is not yet lost!” – that is exactly the mentality we need: Sweden is not yet lost, so long as we still live!

– What is the most important thing that needs change in Sweden?

Gustav Kasselstrand: – In the short term we need to end immigration completely and start to repatriate hundreds of thousands of illegals, criminal aliens and immigrants who burden our society in one way or another.

In the long term we need to completely change our self-understanding as a people and society to make sure that the disastrous politics of the last few decades will never be repeated.

– What is your opinion on the arrest of Tommy Robinson in Britain?

Gustav Kasselstrand: – I think it is scandalous. It is also a clear in sign which direction western Europe is heading. Governments throughout western Europe are evidently more concerned with their own peoples protesting the decline of their countries rather than trying to stop mass immigration that is causing all these problems in the first place. It clearly shows the true agenda of the European establishment.

Also read: UK turning into a prison state where you go to jail for speaking out against pedophilia? Tommy Robinson – Herland Report.

-Do you think freedom of speech is under pressure in Europe?

Gustav Kasselstrand: – Certainly! So called “hate speech”-laws are nothing but the criminalisation of freedom of speech. It should be scraped all together.

-What do you hope as result for the next election in September? (and what is realistic to hope?)

Gustav Kasselstrand: – Our goal is to reach the four per cent threshold that is needed to enter the Swedish parliament. It’s a very tough challenge since the established parties have rigged the whole political system in favour of themselves – but it’s far from impossible.