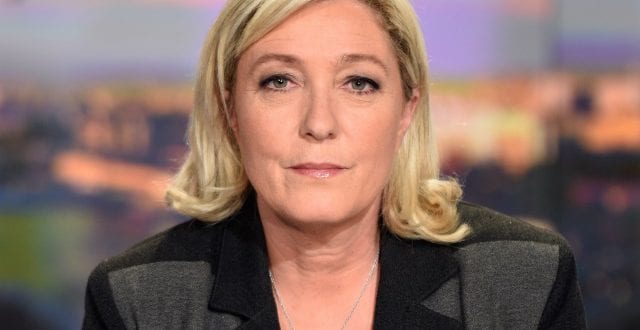 Marine Le Pen: The comeback of nations, of sovereign states, of frontiers and politicians who listen to the people

Herland Report: France’s National Front (FN) leader, Marine Le Pen has said that if she is elected president she will ask the European Union for “our sovereignty back”.

Ms Le Pen has previously described Britain’s vote for Brexit as the most important event since the fall of the Berlin Wall. Great Britain had begun to bring down the “Brussels Wall”, she said.

The Brexit vote had not been bad for the UK: “Great Britain has never had it so good in economic terms. Householders’ confidence has never been so high, exports have never been so strong,” she said.

Marine Le Pen to BBC Hardtalk: “Yes, there is something happening in the world. The will of the people is emerging, and challenging either supranational political powers such as the EU or big financial powers, against a system which for too many years has been defending specific interests, and has forgotten to defend the interests of the people.”

“This is why Trump is emerging, but also Sauders, it is not only a question of Trump.”

“That is Brexit, but also all these referenda within the EU which mark the rejection of the EU by the people in Denmark, the Netherlands, in Hungary a few days ago and soon enough probably in Italy.”

“Somthing fundamental is happening, the comeback of nations, of sovereign states, of people with frontiers. People want to be in charge of their destinies, for a long time they were prevented from doing so.”

Mainstream media has chronically referred to Marine Le Pen as a “populist”.  It signifies, with disdain, the kind of politicians that the elites loath and “do not want in society”.

When studying the phenomenon, anyone who poses other points of view than the current Liberal narrative, is quickly labelled “populist”, “racist”, “intolerant” and  so on.

The has been the New Left authoritarian method, the soft tyranny through which the current mainstream media control the opinion.

The irony becomes apparent when looking at the meaning of the word “populist”.

It signifies someone, a politician or public figure, who is interested in listening to what the people think, and voice political solutions that are in line with what the people wish for.

If a politician wishes to listen to the people, he or she will instantly be labelled a “populist”?

This is how far from the democratic structure we have come in Europe.