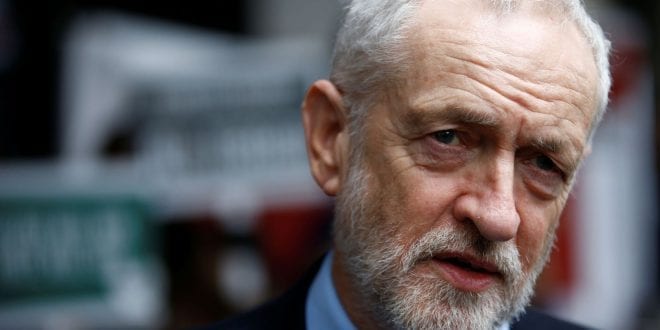 NEW Horrific Anti-Semitism in Jeremy Corbyn Labour, did little to stop it

Days before the UK election, report states that over 130 unresolved cases still linger, Labour members who have said all Jews must be exterminated, call for the extermination of Israel, ask for the “extermination of every Jew on the planet,” labeling Jews “bent nose manipulative liars.”

Labour members stay in the party for months after such statements, or are given remarkably lenient punishment and remain members.

The Simon Wiesenthal Center recently named Jeremy Corbyn its top anti-Semitic person for 2019, stating no one has done more to push antisemittism into the political and social life of a democracy than the Corbyn-led Labour Party.

The Times states: “The secret files, seen by The Sunday Times, reveal the party is still overwhelmed with complaints about anti-Jewish racism that have been left unresolved for months or years. Most have resulted in lenient punishments or no sanctions, according to the documents, despite Jeremy Corbyn’s election campaign claims of zero tolerance.” This is according to a massive leak from Labour’s own diciplinary department.

Jewish groups and others have rung alarm bells over the prospects of party leader Jeremy Corbyn’s promotion to No. 10 Downing Street with increasing distress as the December 12 British election has approached, accusing the far-left politician of allowing a massive rise in anti-Semitism within the ranks of the party, and of being anti-Semitic himself, writes Michael Bachner in Times of Israel.

While Corbyn has repeatedly claimed that the issue of anti-Semitism was being dealt with in a serious and swift manner, a leaked internal recording from October showed that there were more than 130 outstanding cases, despite the vast majority of them having been reported 18 months prior to that, the report said. One such case has not been ruled upon for more than three years.

It reportedly took the party more than ten months to expel a staffer from Nottingham who last year said that “Jews represent a viral infection that need to be completely eliminated” and added that he wanted the “complete extinction of all Jews.”

The party refused to say whether it had referred that case to the police.

Also in 2018, a member from Birmingham called for drowning all Jews in the Red Sea since they are “a cancer on us all,” explaining that there was “no need for gas chambers anyway gas is so expensive and we need it in England.” He was only expelled more than eight months later.

The document show that half of 100 cases dealt with between the summer of 2018 and May, 2019 ended with no action taken or with just a warning, the report said. Some members were ordered to attend diversity training — which Labour has not set up.

The cases that reportedly went unpunished included members denying and distorting the Holocaust, sharing news stories about “a Jewish agenda to obtain the conquest of the gentile world,” and saying it is justified to have a “dim view of the Jews.

“This reduces to rubble my party’s claim that anti-Semitism in the party is being dealt with,” commented former Labour MP Dame Louise Ellman, who recently quit the party after 55 years.

“It is beyond belief that members can make statements of Holocaust denial and call for Jews to be completely exterminated yet remain in the party for months or years or receive a mere slap on the wrist,” she added.

Responding to the Times’ article, Labour argued that the number of outstanding cases cited was “categorically untrue” and added that offenders would now be expelled within weeks after a new fast-track procedure was introduced by Corbyn.

Also Sunday, it was reported that the Simon Wiesenthal Center had named Corbyn as its the top anti-Semitic person or event for 2019, warning that Britain would become a “pariah” if it elects the hard-left leader.

“No one has done more to push mainstream antisemitism into the political and social life of a democracy than the Jeremy Corbyn-led Labour Party,” Rabbi Marvin Hier, the head of the US-based Nazi-hunting group, told the British Daily Mail, which reported the story and dedicated an entire page to it.

“If Jeremy Corbyn wins, he will make Britain a pariah on the world stage,” Hier said. “To have a person seeking the highest office who ignored anti-Semitism for years, who did everything in his power to encourage it is shocking.”