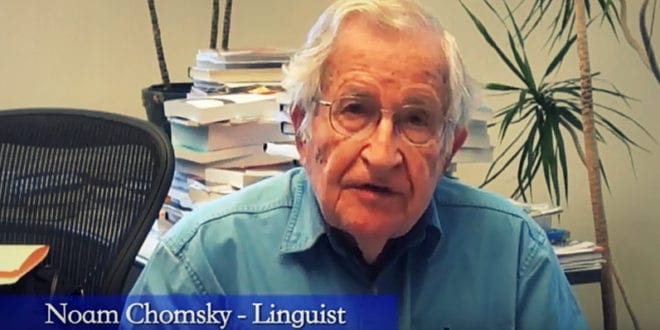 Corona Scandal: Noam Chomsky on being Subjects of Masters operating in Secret

Herland Report: Corona Scandal: Noam Chomsky on being Subjects of Masters: There is a reason Dr. Noam Chomsky is rated one of the top ten cited persons in history.

One may agree with him or not, yet no one can take away from him the legacy of his courage of fearless speech in a Western world so gripped with socialist group think.

As the current Corona scandal is unfolding, with its billionaire oligarch “pandemic expert”, Bill Gates pushing horror scenarios into the media, Chomsky’s words below as he cites Dr. Samuel Huntington are again worth listening to.

Bill Gates has contributed to politician’ reaction of fear and consequent shut-down of national economies.

This reaction of fear combined with mass media hysteria has, in turn, caused a once in a century financial depression.

Who needs enemies if these are our friends.

The massive economic depression may not be due to the virus itself, but the panic reaction that was created with the corresponding government shut-downs, as advised by Bill Gates.

Nobody listens to the real pandemic experts. As it turns out, regular seasonal influenzas kill many more than the Covid-19 has done.

But nobody listened to the experts who warned of the dangers of isolation and the long term effects of lock-down of national economies.

Once known as the shrewdest businessman alive and the world’s richest man, Gates is redefined in a remarkable PR coup as the world leading philantrophist and world saver.

Noam Chomsky on being Subjects of Masters:  Forget the rule of the people. Un-elected Western billionaire oligarchs rule us now, Bill Gates forefront as the messianic “pandemic expert”.

Corona Scandal: Noam Chomsky on being Subjects of Masters: The rise of a feudal overlord system gives us Bill Gates.

He owns everything from charity to to world vaccines, defines pandemic methods, pays the WHO by the billions, funds the NGOs, controls politicians who treat him like a king from the Middle Ages.

It is a massive problem that Western oligarchs like non-democratically elected Bill Gates shapes our democracies with their “philanthropist” billions.

We were supposed to combat Covid-19, not shut down the West. But Bill Gates pushed the idea of the pandemic of the century.

For the first time in history, lack of supply or demand did not shut down the economy and create the depression.

State leaders forced the shut-down on their own nations, local businesses, industries, corporations and employers.

The situation is unprecedented in history. And Bill Gates has been at the forefront in pushing for precisely this.

Led by Scandinavian bestselling author, Hanne Nabintu Herland, The Herland Report news and opinion website provides independent analysis from leading Western intellectuals and ground breaking YouTube interviews, cutting through the mainstream media rhetoric. It is a great place to watch interviews and read the articles of leading intellectuals, thought leaders, authors and activists from across the political spectrum. The Herland Report believes in freedom of speech and its editorial policy resides above the traditional Left vs Right paradigm which we believe has lost its relevance and ability to describe the current driving forces in Western politics.
Previous Dr. Bhakdi: Extreme measures violate human rights, prevents herd immunity #Covid-19
Next World Medical Association med krass kritikk av WHO, mens Solberg forsvarer