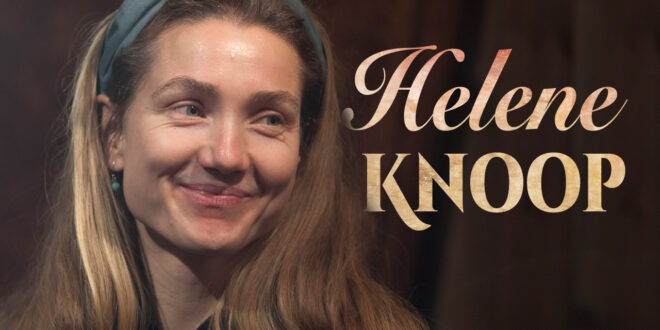 Herland Report: Helene Knoop, the Norwegian painter and former student of Odd Nerdrum, visits Jan-Ove Tuv in this month’s episode of The Cave of Apelles, produced by Bork Spildo Nerdrum.

After studying with Odd Nerdrum in the early 2000s, Helene Knoop devoted her time to the frescoes of Pompeii and Antique sculptures.

Spending a year in Italy, she copied masterworks in public collections, and shares her experiences.

She talks about the importance of androgyny, clichés – and why you should paint self-portraits.

She shares the story of her “grand tour” across Italy — what she learned from the masters and from the Italian culture.

One of Knoop’s friends was supposed to stay in Italy for an extended time to work on her PhD, and Knoop eagerly joined her. Inspired by the higher societies of the old days, the two friends decided to make their own “grand tour” where they would learn from history and visit the most important places.

They kept a list of what to do each day for a year — visiting churches, palazzos, and parks. Along the way, Knoop copied several masterworks. One of them was Narcissus by Caravaggio.

– What did you learn from Caravaggio?, asks Jan-Ove Tuv.

– Copying in general is very good because you have to somehow put away the way you paint, and try to adopt the method of the painting you see in front of you, says Knoop. For instance, she says she was surprised by how thinly Caravaggio’s work was painted.

During her stay in Rome, Helene Knoop says she was looking a lot at antique sculptures, which in return influenced her paintings. She compares the mix of styles in buildings with the different styles of sculptures.

– When we came to Rome, we were thinking about the baroque, because Rome is baroque on the top layer. It’s like a cake. The glaze is baroque, and you start to take a piece of the cake, and you find that it’s even better inside. You thought it was baroque inside, but it was not. You come to the renaissance, and can dig further in, says Knoop.

She gives the example of a church which is built upon a Roman villa, with a Byzantine addition, sculptures from the Middle Ages, and then a finish in the Baroque manner at the very top. All in one church.

– It was the same thing about sculptures, claims Helene Knoop.

The Personification of Inspiration

The centerpiece of the conversation is Helene Knoop’s painting Clio, portraying the Muse of History. Knoop has done a series of paintings of the nine Muses, as well as their leader Apollo, and is fascinated by their cultural importance.

– Did you base the portraits upon specific models?, asks Tuv.

– It’s a mix between sculptures I’ve seen and live models, she says.

Tuv is curious about what Knoop learned from studying the Muses, antique frescoes, and Greek sculptures.

– For me, it was liberating, Helene Knoop answers.

– These stories are more than two thousand years old, and I feel close to them. I don’t think of them as two-thousand-years-old. They’re amusing, they’re interesting, and it’s philosophical as well. And the way they created paintings and scenes is more “crazy” than what I have done, so I feel conservative compared to these frescoes.

The host Jan-Ove Tuv follows her train of thought, and adds:

– It disintegrates time. It’s nothing about how I have to behave in this time. That’s sort of the limits, the prison that you’re in. That’s how I understand the word “liberating”, that it gives you a much grander field or soil to work with, so to speak.

Tuv points out that there is something interesting with the Greco-Roman sculptures of the hermaphrodite, or the androgyny. He points to Helene Knoop’s own androgynous works (for instance Self-Portrait with a Pipe, where she has portrayed herself more masculine) and asks about her thoughts on the value of androgyny in a painting.

– It may become boring if a man is very masculine, and a woman is just beautiful in a painting.

They have to incorporate something of each other to become more real, Knoop states, and continues:

– I think many people are a little mix. Even if we are man and woman, these little crossovers are sometimes interesting and make the character more interesting, Knoop claims.

Tuv brings the conversation over to Leonardo da Vinci.

– If you think about John the Baptist, I think he is quite similar to Mona Lisa. I think they all look like each other. They have this eternal man-woman face.

Helene Knoop argues that the mix of masculinity and femininity, can create an ideal manifestation of a human being:

– You don’t really think about it because they become closer to gods than to humans.

Previous Prince Harry: The Epitomy of the Repressed White Male used in cunning powerplay to hit his own Family
Next The US Fought World War II Against Great Britain to finish off British Empire