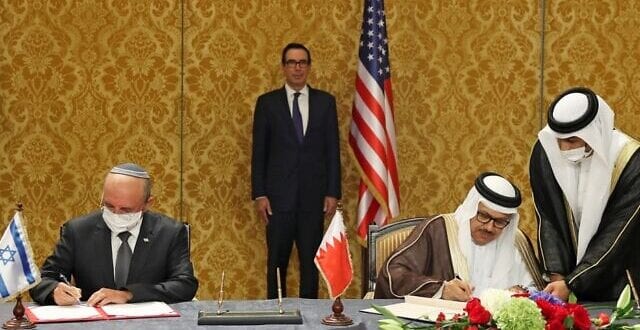 Herland Report: Peace between Israel and Arab nations: One would assume that peace agreements between countries in the Middle East would be celebrated and addressed forefront in the European media, but not quite so.

The Norwegian Nobel Peace Prize Committee found no reason to give President Donald Trump the Prize; who has been three times nominated this year for the remarkable peace achievements Israel-UAE, Israel-Bahrain, Kosovo-Serbia.

While the Scandinavian nations relentlessly complain about lack of peace in the region, why the silence when peace is achieved?

In the Middle East, Israel does not seem to care much about the cold European stance, as the celebrations are high in Arab nations and the region.

Years ago, it seems the Jewish State accepted that many European nations simply do not care about peace in the Middle East – and moved on, forging their own path. It began with Saudi Arabia, now UAE, Bahrain and reportedly more to follow.

Times of Israel: Israel and Bahrain on Sunday formally declared that they have made peace and established formal diplomatic relations, only the fourth such agreement between the Jewish state and an Arab country, and the second in weeks.

At a solemn ceremony in Manama, officials from both nations signed eight bilateral agreements, including a “Joint Communiqué on the establishment of diplomatic, peaceful, and friendly relations.”

In that document, signed by Prime Minister Benjamin Netanyahu’s national security adviser, Meir Ben-Shabbat, and Bahraini Foreign Minister Abdullatif bin Rashid Al-Zayani, the two countries agreed to “recognize and respect each other’s sovereignty and right to live in peace and security, promote lasting security and eschew the threat and use of force… and settle all disputes by agreed peaceful means.”

Peace between Israel and Arab nations: Bahrain-Israel diplomatic relations: The document does not mention the Israeli-Palestinian conflict. However, according to a statement released by the Bahraini government, which it said was a joint statement, the two parties will “continue their efforts to achieve a just, comprehensive, and enduring resolution to the Israeli-Palestinian conflict.” The text did not explicitly mention the goal of Palestinian statehood or a two-state solution.

Peace between Israel and Arab nations: Bahrain-Israel diplomatic relations:  The other bilateral agreements signed Sunday — memoranda of understanding — dealt with bilateral cooperation in various fields, including civil aviation, communications, agricultural and technology. They were signed by director-generals of the relevant ministries from both countries.

None of the agreements’ full text was immediately released.

In a lengthy speech following the signing ceremony, Al-Zayani expressed his hope for “fruitful bilateral cooperation in every field,” and regional peace, including a two-state solution to the Israeli-Palestinian conflict.

Bahrain’s King Hamad bin Isa Al-Khalifa “believes in the importance of strengthening the values of tolerance and coexistence and mutual understanding between different cultures and religions,” the top diplomat said, especially in a region “whose peoples have suffered from many conflicts and struggles.”

“The Palestinian question must be solved through direct negotiations between the two sides to reach a solution which satisfies both parties and brings about a two-state solution, according to the principles of the Arab Peace Initiative and the relevant international law,” Al-Zayani went on.

“We salute the Israeli government for its responsiveness in realizing this historic step,” al-Zayani says. “We will work with the international community to realize people across the Middle East in the near future.”

US Treasury Secretary Steven Mnuchin, representing the administration of President Donald Trump — which helped broker the deal — briefly spoke about the opportunities for both countries that could now be realized.

Previous Covid-19 Political Threat Is Now Much Greater Than Its Medical One
Next NEW BOOK Tom Fitton: A Republic Under Assault: The Left’s Ongoing Attack on American Freedom