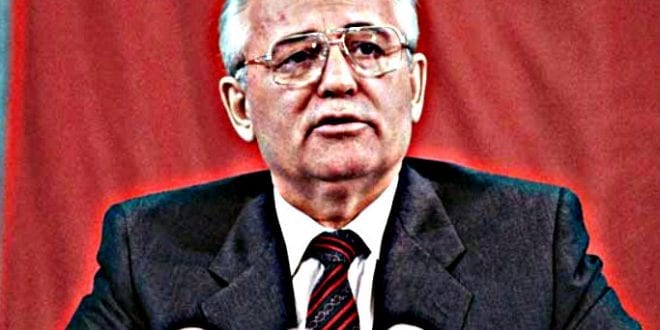 Russia and the US are not condemned to confrontation – Mikhail Gorbachev

I welcome all who have gathered to mark the thirtieth anniversary of President Ronald Reagan’s visit to Moscow and the US-Soviet summit. I think it was a truly historic event. It was a kind of summing up of the work we had done, starting in Geneva and then going through Reykjavik and Washington to Moscow, states former president of the Soviet Union and famous inventor of glasnost, Mikhail Gorbachev on Gorbachev Foundation:

It was not an easy path. Its first major milestone was the Joint US-Soviet Statement which declared that “a nuclear war cannot be won and must never be fought” and that “the two sides will not seek military superiority.” This gave ground to the world media to speak of the spirit of Geneva.

But the spirit of Geneva was severely tested. The entry of US Navy ships in our territorial waters, spy scandals, propaganda campaigns in the in the media – all that and a lot more was done in order to push us off track.

The negotiations could have turned into unproductive routine. It took Reykjavik to prevent a new deadlock and open up prospects.
I won’t describe all the ups and downs of the historic meeting in Reykjavik.

We came there with constructive proposals, which opened the way to agreements on INF and START, but stumbled on the US President’s commitment to the Strategic Defense Initiative and his attempt to obtain our consent to deployment of missile defenses. Nevertheless, the Reykjavik agreements were a breakthrough toward the first real arms reduction treaties.

Of equal importance was the fact that in Reykjavik Ronald Reagan showed himself to be a proponent of a world without nuclear weapons. That brought us closer together.

The summits in Washington and Moscow pointed to a new level of trust in our relations. It was not an accident that Ronald Reagan, standing next to me in the Kremlin, near the Tsar Cannon, answered the question whether he still considered the Soviet Union an evil empire by saying “No, it was another time, another era.”

Nobody put those words in his mouth. While this was not yet the final line drawn under the Cold War, the acute phase of the confrontation was over. I think this is a unique example of such a turnabout in relations between two major powers.

Why did in happen within such a historically short time? The short answer is: Because both sides had the political will. Without it, it would have been impossible to remove all the barriers and obstacles accumulated during the decades of the Cold War.

I am recalling this not just to mark this meeting’s anniversary but also because I am convinced that the experience of those years is relevant today. It suggests that even in the most difficult situations we must not panic or succumb to pessimism.

We must, however, be sober and realistic in assessing the current situation in the world and in relations between our countries. Over the past few years I’ve been following with great concern the developments in our relations. The most important gains of our past efforts – trust, the end of the arms race, cooperation and the prospect of partnership – are now in jeopardy.

I don’t want to strike a pose of accuser but let me repeat what I have said on many occasions. The major cause of the current severe problems lies in the incorrect assessment by the West and particularly by the United States of the historic event – the end of the Cold War.

It was our common victory, achieved through dialogue, negotiations and resolution of the most complex security, disarmament and regional issues and by putting bilateral relations back on track. Had it not been so, the Cold War and the arms race could have continued for decades, and who knows what it could have led to!

Instead of recognizing all that, the West declared victory in the Cold War. American leaders stated that it happened thanks to the policy of force. Therefore, they concluded, it is necessary to build up power, to impose their will, to build a unipolar world, an American empire.

We know the consequences – in the Middle East, in the Mediterranean, and in Europe: in Yugoslavia and now in Ukraine. This is happening in a continent where two world wars started! I believe that conflicts and the use of force in Europe are particularly unforgivable. It is the greatest failure of European and global politics.

A comprehensive system of security has not been built in Europe.

We proposed creating a Security Council for Europe, and the idea met with support from Mitterand, Genscher, Scowcroft; nevertheless, it was ignored. Instead, there was the enlargement of NATO, in spite of the position of Russia as well as warnings from many Western politicians and diplomats.

I will not list here all the examples of the United States’ unilateral action. In Russia, they were perceived unambiguously: Our interests are being ignored, and the aim is to push us out of the world arena. That is not the way to talk to Russia.

Those who expected Russia to agree to a secondary role in world affairs and not to defend its interests made a huge mistake, as did those who sought to isolate Russia.

This is the real situation. What is needed now is realistic policy. The main question today is what needs to be done to start exiting from the current deadlock and move our relations off the ground.

I have made my views known many times, through both Russian and international media, including TIME magazine. We squandered 2017 and, already, almost a half of this year. We must now make up for lost time.

First of all, I urge that an end should be put to further escalation of sanctions, countermeasures and negative, hostile rhetoric. A meeting between the President of Russia and the United States should be prepared. It is far from normal that they still have not had full-fledged negotiations.

It is important to define the summit’s agenda, starting with the main priorities. Today, they are the problems of curbing the arms race, strengthening strategic stability and reaffirming the arms reduction agreements – INF and START. A strong impetus from the president is required.

At the same time, dialogue should begin on the entire agenda, including regional and global problems and bilateral relations. The obstacles here are tremendous and it would take a big effort to get them out of the way. And yet, there is no alternative. This is something political leaders should understand, and we must insist on it.

I believe all of us – civil society organizations, experts, academics, businessmen and the media – must stimulate movement in this direction. We need to resume people-to people diplomacy and expand contacts, educational and student exchanges. This is essential, though it might be done in ways different from thirty years ago.

I hope we’ll have the strength and energy to accomplish the enormous work that lies ahead in order to break out of the vicious circle and start moving toward normal relations.

Indeed, we must look beyond that, toward the prospect of cooperation and partnership. We gave serious thought to that prospect, but today some are saying that it is a utopia and that Russia and the United States are condemned to confrontation. My answer is: No, they are not. And I hope that all of you here share that view.

I wish you fruitful deliberations and an interesting discussion that would help learn lessons from the past and formulate new, constructive proposals.