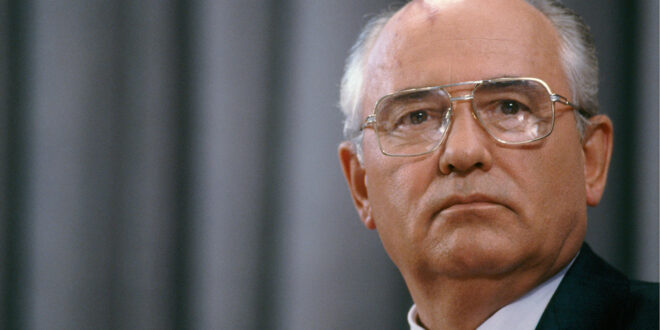 Soviet President Mikhail Gorbachev speaks at a press conference after the attempted coup on Moscow. Staged in protest against Gorbachev's move toward more democratic policies, the coup ultimately failed, but seriously weakened his power and that of the Communist Party. (Photo by Pascal Le Segretain/Sygma via Getty Images)

Herland Report: Cold War Resurrected: My obituary of Gorbachev brought interview requests from three major Russian media organizations. At the risk of being labeled “a Russian agent” I accepted.

It was an interesting experience. Russians tend to see NATO on Russia’s border’s as Gorbachev’s fault for not getting in writing the George H. W. Bush administration’s guarantee that NATO would not move one inch to the East if Gorbachev permitted the reunification of Germany.

This is known as “Gorbachev’s mistake,” writes Dr. Paul Craig Roberts, the chairman of The Institute for Political Economy.

I think this misinterpretation of what Gorbachev’s mistake was can be cleared up with a question: If a government does not respect its word, why would it respect its signature? Indeed, we have seen with later US regimes the breaking of arms limitation agreements that were signed.

Gorbachev’s mistake was his failure to appreciate the distress his concessions to the US about Germany and Eastern Europe were causing politburo hardliners.

Hardliners thought Gorbachev was giving up Russian buffers prematurely. To stop what they saw as erosion of Russia’s strategic position, they placed Gorbachev under house arrest. Thus, Gorbachev’s mistake was misjudging the Politburo.

Quickly, in 1991 Paul Wolfowitz, a top Pentagon official penned a new foreign policy doctrine for Washington. Wolfowitz described the principal goal of American foreign policy to be to prevent the rise of any country with sufficient power to serve as a constraint on US unilateralism.

The doctrine required that Russia not be permitted to recover her previous position, and to insure a defanged Russia Eastern Europe would be absorbed into NATO. But the neoconservatives, although prominent in government, were not yet in a position to act on their doctrine.

According to the New York Times, in 1997 the Yeltsin government agreed to the expansion. President Clinton then announced a target date of 1999 at which time Poland, Hungary, and the Czech Republic became, with the Russian government’s reluctant agreement, members of NATO.

This was seven years after the George H.W. Bush administration and 11 years after Reagan left office. Obviously, Reagan did not collapse the Soviet Union and place NATO on Russia’s borders.

Neither did Reagan’s successor. It was done by the neoconservatives who saw that a weakened Russia gave them the hegemonic opportunity they desired.

It took the neoconservatives time. They had to isolate and marginalize other foreign policy views, monopolize policy positions in the Defense and State departments and National Security Council and use the CIA’s control of the media to form and control the narrative.

If Reagan and Gorbachev had foreseen these developments, they would have had prescience beyond human capability.

The conclusion seems clear. The Politburo destroyed the Soviet Union by arresting Gorbachev.
The removal of the Soviet constraint on Washington’s unilateralism gave the neoconservatives the opportunity to achieve the hegemony they desired, and they took it.

Cold War Resurrected: As we now know, by 2007 Yeltsin’s successor, Putin, had had enough of Russia’s humiliation. He announced its end at the Munich Security Conference. In the years since he and his foreign minister, Lavrov, have made every effort to find accommodation with the West on equal terms.
This Washington has denied.

So now the Reagan/Gorbachev historic achievement of ending the Cold War has been overturned by a handful of neoconservatives. We again face nuclear Armageddon and a vast array of idiotic and dangerous moves by Washington.

So far the Kremlin has been unwilling to use the force at its disposal, thus encouraging the West to further provocations. Sooner or later these provocations will result in war.

Dr. Paul Craig Roberts is the chairman of The Institute for Political Economy, former associate editor of the Wall Street Journal, and a well known author of many books. He is also a regular contributor to the Herland Report news site as well as The Herland Report TV interviews on YouTube. He has had careers in scholarship and academia, journalism, public service, and business. He has been awarded the Treasury Department’s Meritorious Service Award for “his outstanding contributions to the formulation of United States economic policy.”
Previous Mikhail Gorbachev R.I.P.
Next Sanctions against Russia failing spectacularly, the knockout blow hits Europe instead