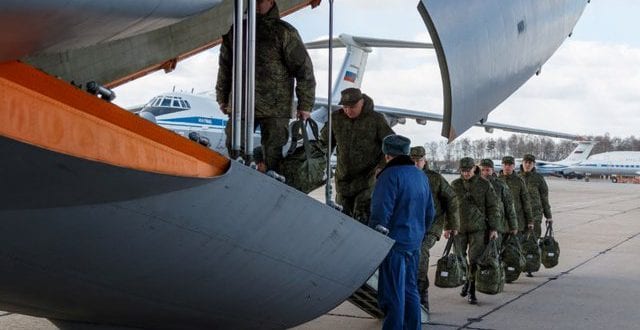 Russia deploys military to help Italy, where is the EU help…?

Herland Report: Russia deploys military to help Italy, where is the EU help…? For the past three days, Russian military transport planes with medical specialists and aid on board have been landing at an air base near Rome to help Italy in the fight against the coronavirus outbreak.

Critics immediately started looking for some ulterior motives behind Moscow’s move, describing it as just a political PR stunt.

Or a demonstration to Europe of the Kremlin’s capabilities and its immunity to a global pandemic, completely oblivious of the fact that this unselfish gesture of goodwill is not the first in the history of Russia’s relations with the West, writes Arthur Evans, guest author at Fort Russ News.

Suffice it to recall how, 75 years ago, the Soviet people selflessly saved the world from the Nazi plague without asking for anything in return.

(Feature photo US News: Russian military specialists board a transport plane heading to Italy, hit by the outbreak of coronavirus disease (COVID-19), at a military airdrome in Moscow region, Russia March 22, 2020.)

US News comments: Russia’s military planeloads of aid to Italy to combat the spread of coronavirus have exposed the European Union’s failure to provide swift help to a member in crisis and handed President Vladimir Putin a publicity coup at home and abroad.

Fort Russ News: Russians like to joke about there being no such a thing as an ex-doctor, soldier or police officer, but it looks like in Russia there are no former emergency specialists either.

Defense Minister Sergey Shoigu spent many years at the head of this country’s Emergency Situations Ministry, and is the one who dispatched Russian rescuers to Japan in the aftermath of the 2011 earthquake there.

Russians have a predilection for saving everyone; it’s a sort of a national trait here. Are they doing this to win kudos abroad? Hardly so…

The first thing Japan did after recovering from the consequences of that devastating natural disaster was to reiterate its claim to Russia’s South Kuril islands, so Moscow is hardly expecting Italy to make any decisive calls for lifting the EU’s anti-Russian sanctions.

Russia was still very quick to send out 14 planes with 100 military virologists and professional nurses, special equipment and instruments to Italy in keeping with an earlier agreement between President Vladimir Putin and Italian Prime Minister Giuseppe Conte.

Russia even sent in its most experienced medics – military doctors, who had earlier experience of tending to potential COVID-19 carriers from China, who had fought the Ebola epidemic in Africa, and who have a long history of participation in humanitarian missions.

Whether these few dozen people are able to turn the tide in the fight against the pandemic is another question, but in any case, their contribution will be extremely important.

Russia deploys military to help Italy, where is the EU help…? Meanwhile, as a brief interview with one of the Army nurses, staff sergeant Natalya Krivosheyeva, aired on Russia’s Channel One television showed, the Russian military doctors arrived in Italy to “help the country out of trouble,” and this is exactly what they are all set to do.

In any case, 100 professional doctors with vast experience and military discipline are providing urgent vital assistance to Italy, which is struggling with a shortage of medical staff.

This assistance is all the more valuable now that the NATO countries have all refused to line up similar support, the Western defense alliance’s mobile hospital has moved to Luxembourg, closer to the center of European decision-making, and there is virtually no support coming from Italy’s EU partners.

Russia deploys military to help Italy, where is the EU help…? Why is Putin lending a helping hand to Italy? Does he really expect any gratitude from Rome? He is a realist.

The news about dozens of professional Russian medics being sent overseas will hardly contribute to his popularity back home. Moreover, on April 22, or later Moscow will hold a referendum that would allow Vladimir Putin to remain in power until 2036.

Russians are way more concerned about the situation with the coronavirus pandemic in their own country than in faraway Italy.

And still, Beijing and Moscow have so far been the only ones to provide real assistance to Rome. From the standpoint of national mentality, Russia’s actions are fairly understandable.

A popular Russian joke says that “if you want to do something well, call the military.” Russian military medicine is one of the best around, and Russian doctors are going to Italy to gain experience and hone their skills.

They are going because such missions are part and parcel of the algorithm of the Russian military. They do not expect anything in return, all they want is expertise.

Some critics were sure to be like “Why ask for help from the Russians?” “What will the Kremlin want in exchange for helping us out?”

The thing is, however, that Putin and Shoigu have created a system, which initially implies emergency assistance even for countries that are not Russia’s best friends.

Moreover, if an epidemic of such magnitude flared up in Poland, which reportedly closed its airspace to Russian planes carrying aid to Italy, Putin would still offer similar help to Warsaw. This is how the Russian Defense Ministry works, for the good of the whole world.

The Russian military specialists are at work now and are sure to save lives. What is more precious than human life? Certainly not politics, and this is exactly what European leaders need to realize.

Previous Media pumping Corona Fear in an unprecedented Way, look to China
Next The Jewish question: Why do Marxists and Socialists dislike Jews?