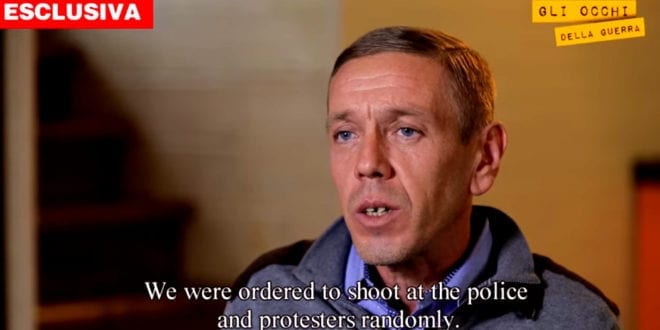 Herland Report: “We were ordered to shoot both policemen and demonstrators without making a difference between them,” Revazishvili said. According to Nergadze, shooting was conducted from the hotel “Ukraine”, writes New Day News.

“Snipers who shot during the riots in the center of Kiev about 80 people were natives of Georgia who came to the Ukrainian capital on the orders of ex-Georgian President Mikhail Saakashvili and received orders from American instructors. They are Kvaratskhelia Pledges, Alexander Revazishvili and Koba Nergadze, who were in the secret security service of the former Georgian leader.

The Italian journalist, after a two-year investigation, found two of them in Skopje, the capital of Macedonia, the third in another East European country, the name that he kept secret.”

Watch the Italian TV documentary below. Italian journalists established the identity of three snipers, whose actions on the Kiev Maydan in February 2014 led to a coup d’état and the escape of then-Ukrainian President Viktor Yanukovych from the country, writes New Day News.

“On the air of the “Matrix” program on the TV-channel “Mediaset” the military correspondent of the newspaper “Il Giornale” Gian Mikalessin announced the names of the shooters.

Snipers who shot during the riots in the center of Kiev about 80 people were natives of Georgia who came to the Ukrainian capital on the orders of ex-Georgian President Mikhail Saakashvili and received orders from American instructors.

They are Kvaratskhelia Pledges , Alexander Revazishvili and Koba Nergadze , who were in the secret security service of the former Georgian leader.

The Italian journalist, after a two-year investigation, found two of them in Skopje, the capital of Macedonia, the third in another East European country, the name that he kept secret.

“We were ordered to shoot both policemen and demonstrators without making a difference between them,” Revazishvili said. According to Nergadze, shooting was conducted from the hotel “Ukraine”.

These data completely refute the official version of the current Ukrainian authorities, according to which the slaughter in the center of Kiev was then arranged by the Yanukovych government, which is supported by most Western countries. In the investigation film, a telephone conversation is held between Estonian Foreign Minister Urmas Paet who, referring to the words of a physician who examined the bodies of the victims on the Maidan, informs European Commissioner for Foreign Affairs Catherine Ashton that all the victims were killed by snipers on both sides: and among people who were on the street.

“All of them were killed by the same snipers. Indeed, it is troubling that the new coalition refuses to investigate what really happened. Therefore, the conviction that snipers was not Yanukovych, but someone from the newly formed coalition is growing stronger and stronger, “Paet states.

The Italian journalist foundout that the military adviserof Saakashvili Mamuk Mamulashvili coordinated the snipers , who was sent to Kiev to support the protest action on Maidan. Subsequently, he will become commander of a group of Georgian volunteers who participated in clashes with rebels in the Donbas.

According to one of the snipers named Zalogy, their first meeting with Mamulashvili took place in the premises of the National Movement (obviously, the Unified National Movement (Saakashvili) means), there were 25 people of us, 10 of whom agreed to a train to Kiev. He also added that Lithuanians were also seen among the snipers.

“On February 15 we flew by plane. On board I was given my passport and another passport, in which was my photograph, but with a different name and surname. After that, we were given a thousand dollars for each and promised to give out five thousand dollars each, “Zalogi said. Approximately February 16-17, the situation became more and more tense every day. By that time, it was already out of control, “he commented.

Revazishvili also added that in addition to Mamulashvili, they were presented with “another person in uniform” as an instructor and an American soldier. “This American was called Brian Christopher Boyenger, a former officer and sniper of the 101st Airborne Division of the United States. After the Maidan, he went to the Donbas, where he fought in the Georgian Legion, “he said.

“We were in constant contact with this Brian, who was a Mamulashvili person. He gave us orders. I had to follow all his instructions, “Nergadze confirmed.

Snipers also confirmed another fact: according to their testimony, People’s Deputy of Ukraine Sergey Pashinsky is directly involved in the distribution of arms . “Pashinsky and three more, among whom was Parasyuk ( Vladimir Parasyuk , a former centurion of Maidan, now a deputy of the Verkhovna Rada), brought bags of weapons to the hotel. They brought them to my room, “Nergadze said.

As reported by Revazishvili, on 15 or 16 February Pashinsky ordered us to collect all personal belongings and took us to the conservatory building. “I immediately realized that the bags they brought were weapons. They pulled out their weapons and started distributing it to members of our group. Pashinsky only spoke and he gave orders. He explained to us that there was a danger that the special forces of the Berkut police could break into the building. He told us that we must defend ourselves at all costs, “he said. For his part Nergadze added that “no one told us that we have to kill people. It was necessary to shoot in order to sow confusion, create confusion. ”

According to Revazishvili, a direct order to open fire was given by Pashinsky. “We had to shoot groups of two or three people. All began to shoot, making two or three shots, and Pashinsky moved from one group to another. And next to him there was always a young man named Parasyuk. We had little choice: we were ordered to shoot both the special forces of the Berkut police and the demonstrators without making a difference between them. Therefore, I was stunned and dumbfounded, “he said.

Commenting on the investigation, its author Jan Mikalessin noted that essentially the snipers thought that the Kiev Maydan, like the so-called “Rose Revolution” in Georgia, would end peacefully and they would not have to take up arms. “I decided to speak and tell everything not now – it has matured slowly, over time. In truth, there is no reason to prosecute me (on the basis of the law). Based on the laws of my country, I have nothing to blame. I am in any case a soldier, and I am not afraid of anything. Even death, “Nergadze said.

“Unfortunately, fake news is an official truth. Or, at least, the official truth that we’ve been hammered in over the last four years, and which cost us, we Italians, is very expensive, “concluded Mikalesin.

“They decided to kill their own people in order to kindle a mutiny ?!” – commented on the results of the investigation, the host of the television program Nicola Porro.” Rome – Moscow, Information service of RIA “New Day”.