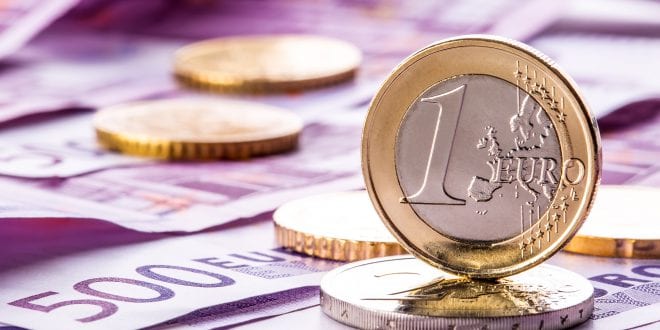 Several 500 euro banknotes and coins are adjacent. Symbolic photo for wealt.Euro coin balancing on stack with background of banknotes.

The problem with Europe is the Euro – Joseph Stiglitz

Herland Report: Europe, the source of the Enlightenment, the birthplace of modern science, is in crisis because the problem with Europe is the Euro.

This part of the world, which hosted the Industrial Revolution that led to unprecedented changes in standards of living in the past two centuries, has been experiencing a long period of near-stagnation, writes the world known economist, Joseph Stiglitz in The Guardian.

The euro has failed to achieve either of its two principal goals of prosperity and political integration: these goals are now more distant than they were before the creation of the eurozone. Instead of peace and harmony, European countries now view each other with distrust and anger.

GDP per capita (adjusted for inflation) for the euro zone was estimated to be barely higher in 2015 than it was in 2007. Some countries have been in depression for years.

Exerpts from the edited version of economist Joseph Stiglitz’ The Euro and Its Threat to the Future of Europe:

When the US unemployment rate hit 10% in October 2009, most Americans thought that was intolerable. It has since declined to less than 5%. Yet the unemployment rate in the eurozone reached 10% in 2009 as well, and has been stuck in double digits ever since.

On average, more than one out of five young people in the labour force are unemployed, but in the worst-hit crisis countries, almost one out of two looking for work can’t find jobs.

Dry statistics about youth unemployment carry in them the dashed dreams and aspirations of millions of young Europeans, many of whom have worked and studied hard.

They tell us about families split apart, as those who can leave emigrate from their country in search of work. They presage a European future with lower growth and living standards, perhaps for decades to come.

“These economic facts have, in turn, deep political ramifications. The foundations of post-cold war Europe are being shaken.

Parties of the extreme right and left and others advocating the breakup of their nation-states, especially in Spain but even in Italy, are ascendant, and Britain voted to leave Europe altogether.

What had seemed inevitable in the arc of history – the formation of nation-states in the 19th century – is now being questioned.

Questions are arising, too, about the great achievement of post-second world war Europe – the creation of the European Union.

While there are many factors contributing to Europe’s travails, there is one underlying mistake: the creation of the single currency, the euro.

Or, more precisely, the creation of a single currency without establishing a set of institutions that enabled a region of Europe’s diversity to function effectively.

The euro was a political project; it was supposed to enhance the political integration of Europe, bringing the people and countries closer together and ensuring peaceful coexistence.

The euro has failed to achieve either of its two principal goals of prosperity and political integration: these goals are now more distant than they were before the creation of the eurozone.

Instead of peace and harmony, European countries now view each other with distrust and anger. Old stereotypes are being revived as northern Europe decries the south as lazy and unreliable, and memories of Germany’s behaviour in the world wars are invoked.

The eurozone was flawed at birth. The structure of the eurozone – the rules, regulations and institutions that govern it – is to blame for the poor performance of the region, including its multiple crises.

The diversity of Europe had been its strength. But for a single currency to work over a region with enormous economic and political diversity is not easy.

A single currency entails a fixed exchange rate among the countries, and a single interest rate. Even if these are set to reflect the circumstances in the majority of member countries, given the economic diversity, there needs to be an array of institutions that can help those nations for which the policies are not well suited.

Europe failed to create these institutions.

Worse still, the structure of the eurozone built in certain ideas about what was required for economic success – for instance, that the central bank should focus on inflation, as opposed to the mandate of the Federal Reserve in the US, which incorporates unemployment, growth and stability.

It was not simply that the eurozone was not structured to accommodate Europe’s economic diversity; it was that the structure of the eurozone, its rules and regulations, were not designed to promote growth, employment and stability.

Why would well-intentioned statesmen and women, attempting to forge a stronger, more united Europe, create something that has had the opposite effect?

The founders of the euro were guided by a set of ideas and notions about how economies function that were fashionable at the time, but that were simply wrong. They had faith in markets, but lacked an understanding of the limitations of markets and what was required to make them work.

While in most of the world market fundamentalism has been discredited, especially in the aftermath of the 2008 global financial crisis, those beliefs survive and flourish within the eurozone’s dominant power, Germany.

These beliefs are held with such conviction and certainty, immune to new contrary evidence, that they are rightly described as an ideology.

Similar ideas, pushed by the IMF and the World Bank around the globe, led to a lost quarter-century in Africa, a lost decade in Latin America, and a transition from communism to the market economy in the former Soviet Union and eastern Europe that was, to say the least, a disappointment.

It is perhaps natural that the eurozone’s leaders want to blame the victim – to blame the countries in recession or depression or reeling from a referendum result – for bringing about this state of affairs.

They do not want to blame themselves and the great institutions that they have helped create, and which they now head. But blaming the victim will not solve the euro problem – and it is in large measure unfair.

It should have surprised no one that Europe’s response to the UK’s referendum was dominated by the same harsh response that greeted Greece’s June 2015 ballot-box rejection of its bailout package.

Herman Van Rompuy, a former European council president, expressed a widespread feeling when he said that David Cameron’s decision to hold a referendum “was the worst policy decision in decades”.

In so saying, he revealed a deep antipathy towards democratic accountability. Understandably so: in most of the cases in which voters have been directly turned to, they have rejected the euro, the European Union and the European constitution.

Moreover, polls at the time of Brexit showed that a majority of those in many European countries besides the UK had an unfavourable view of the EU (including Greece, France, and Spain).

The economic and political consequences of Brexit will, of course, depend a great deal on Europe’s response. Most assume that Europe will not cut off its nose to spite its face. It seems in the interests of everyone to work out the best economic relationship consistent with the democratic wishes and concerns of those on both sides of the Channel.

Anything the EU does to the UK to try to punish it would have an equal and opposite effect, hurting itself at least as much in the process. The fact that European stock markets were down markedly and European banks were particularly hard hit at least suggests that Brexit was bad for Europe as well.

But Jean-Claude Juncker, the proud architect of Luxembourg’s massive corporate tax-avoidance schemes and now the head of the EU commission, has taken a hard line – perhaps understandably, given that he may go down in history as the person on whose watch the dissolution of the EU began.

His line is that Europe must be unrelenting in its punishment, and should offer little more than what the UK is guaranteed under normal global agreements, such as the World Trade Organisation, lest others join the rush to the exit.

The euro is often described as a bad marriage. A bad marriage involves two people who never should have been joined together making vows that are supposedly indissoluble.

The euro is more complicated: it is a union of 19 markedly different countries tying themselves together. When a couple in trouble goes for marriage counselling, old-style counsellors would try to figure out how to make the marriage work, but a modern one begins by asking:

Should this marriage be saved? The costs of dissolution – both financial and emotional – may be very high. But the costs of staying together may be even higher.

On both sides of the Channel, politics should be directed at understanding the underlying sources of anger; how, in a democracy, the political establishment could have done so little to address the concerns of so many citizens, and figuring out how to do that now:

to create within each country, and through cross-border arrangements, a new, more democratic Europe, which sees its goal as improving the wellbeing of ordinary citizens.

This can’t be done with the neoliberal ideology that has prevailed for a third of a century and played such an important role in the construction of the euro.

And it won’t be done if we confuse ends with means – the euro is not an end in itself, but a means, which, if well managed, might bring greater shared prosperity, but, if not well managed, will lead to lower standards of living for many or possibly the majority of citizens.” Read the full article in The Guardian.