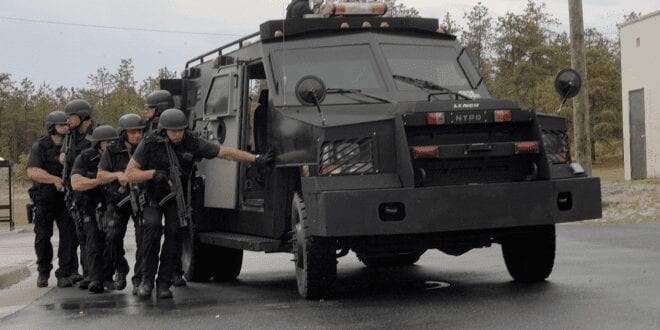 The Militia Militarization of US Police Force

Herland Report: The Militia Militarization of US Police Force: Thanks primarily to the Pentagon’s 1033 program, which allows law enforcement agencies to get their hands on Department of Defense technology, and the Bush-era War on Terror, American police

have received a startling amount of heavy-duty, military-grade hardware.

In fact, between 1998 and 2014, the dollar value of military hardware sent to police departments skyrocketed from $9.4 million to a startling $796.8 million.

As the police have militarized, focus has shifted from one who keeps the peace to one who enforces the law—an important difference. This writes historian Sam Jacobs at Ammo.com.

The Militia Militarization of US Police Force: And just as when “all you’ve got is a hammer, then everything looks like a nail”, militarized police have become more willing to use their new weapons when carrying out law enforcement tasks.

For example, the number of SWAT raids in the United States grew dramatically from about 3,000 in 1980, to a whopping 50,000 SWAT raids in 2014, according to The New Jim Crow by Michelle Alexander.

To say that the militarization of the police is nothing new is to ignore America’s recent history as well as the long-standing model of a peace officer. As the police have militarized and the Pentagon backs major players in Hollywood, the focus has shifted from one who keeps the peace to one who enforces the law – and that’s an important difference.

Militia Militarization: It all began during Prohibition in the 1920s. Organized crime got its first foothold in American life thanks to the lucrative black market in liquor.

This was also the golden age of bank robbery with figures like Bonnie and Clyde, Pretty Boy Floyd, and John Dillinger becoming folk heroes. The Thompson submachine gun and the Browning Automatic Rifle were increasingly used by these crime “stars.”

On the flipside, the Prohibition Era saw domestic police departments using automatic weapons, armored vehicles, and ammo developed with the express purpose of being able to penetrate the early bulletproof vests worn by gangsters of the era.

Unrelated to the War on Drugs, the 1986 FBI Miami shootout was a game-changer for law enforcement budgets. Police outnumbered suspects by a factor of four. Despite this, they were pinned down by suppressive gunfire.

The incident lasted five minutes and 145 rounds were fired. The suspects were hit multiple times, but continued to fight in part because the officers’ and agents’ service revolvers did not have sufficient stopping power.

In response, there was a movement to increase the firepower of service revolvers. This is when semi-automatic pistols began to replace the revolver and larger magazines became the rule. Rifles, shotguns, and heavier body armor also saw increased adoption after this shootout.

The Militia Militarization of US Police Force: Another incident accelerating the militarization of police is the North Hollywood shootout of 1997. This bank robbery left two dead (the perps) and 20 wounded – 12 police officers and eight civilians.

It lasted 44 minutes, an eternity in terms of police shootouts, with approximately 2,000 rounds fired.

The perps got off approximately twice as many rounds as the police officers on the scene, but the game-changer was the arrival of the SWAT team, who had much more appropriate weaponry.

This led to everyday police officers getting equipment that was customary for SWAT teams in the 1990s.

The 1033 Program was enacted in the wake of the 1997 North Hollywood shootout. Created by the National Defense Authorization Act for Fiscal Year 1997, it allowed law enforcement agencies to get their hands on military hardware.

Between 1997 and 2014, $5.1 billion in material was transferred from the Department of Defense to local law enforcement—with ammunition being the most common requisition.

About 8,000 law enforcement offices were participating in the program as of 2014.

Civil asset forfeiture (CAF) is a major driver in the militarization of the police force. Put simply, CAF is a legal principle that allows police to seize money and property from suspected criminals, which they can do without a warrant because the suspect’s property doesn’t have the presumption of innocence.

CAF is effectively a legally allowed form of theft by police officers. Here is a short list of military hardware purchased with CAF funds.

Begun in 1965 in Philadelphia, SWAT teams were conceived as a way to restrain urban unrest, deal with hostage situations, or handle barricaded marksmen.

The most heavily armed gang on the street isn’t your local street gang—it’s law enforcement. They have weapons far in excess to that of the average citizen or even the average criminal.

This raises a point worth considering: The usual suspects will rage at your ability to legally own an AR-15, a right codified by the United States Constitution. But rare is the gun grabber who makes any kind of fuss when police use directed energy weapons. Full article here.