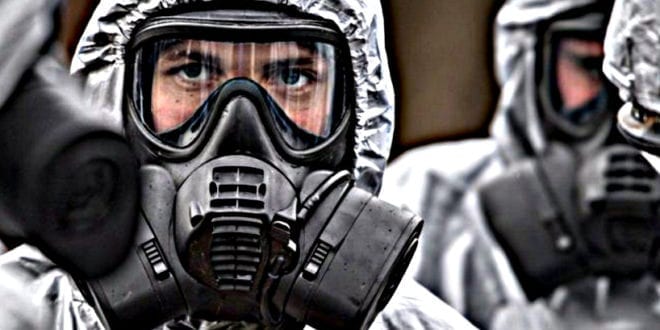 Ludwig Watzal: The West is doing everything to fabricate a cause of war against or to isolate Russia further internationally. So far, ‚Novichok‘ rests on rumors.

The affair was made up the British and the French intelligence agencies without having presented any evidence, writes editor Dr. Ludwig Watzal on The Herland Report, first published here. He runs the bilingual blog “Between the lines”.

The term ‚Novichok‘ was used to sound Russian, in fact, this nerve agent is known internationally as A-234. Instead, the Western alliance presents this case as a foregone conclusion.  And the Western fawning media agitate as cheerleaders, having specialized in producing fake news a long time ago.

Many countries are producing this kind of nerve gas, among them a British company close to the town Salisbury, where the incident happened. What about the U.S., Israel, Uzbekistan, France, and the Brits themselves?

Israel has a vast stockpile of biochemical weapons and does not allow internal inspections. To believe the British story, told by Theresa May or even Boris Johnson, is like thinking into Easter bunny.

So far, the Brits have been denying any requests by Russia to take part in the solving of this case. Why? As the public got told, Yulia Skripal, the daughter of double agent Sergei Skripal, is on the road to recovery.

Both are still Russian citizens. Russia has been denied to care about its citizens. When can Yulia Skripal testify, do the British intelligence tells her what to say publically? Perhaps she can even ‚prove‘ that President Putin himself committed the attack!

The Russian Embassy in London sent the following questions to the Foreign Ministry for clarification:

„1. Why has Russia been denied the right of consular access to the two Russian citizens, who came to harm on British territory?

A similar list of questions was sent to the French foreign ministry by the Russian embassy in Paris. Russia wanted to know on what grounds France was involved in this case. How come that France got a sample of this nerve gas? Or do the French produce this gas themselves? The so-called free Western media do not ask these questions. Instead, they repeat the unfounded allegation by the Brits against Russia, which is so faring fact-free.

How credible is the West, after having staged several incidents that led to wars. Such as Pearl Harbor (Franklin D. Roosevelt knew about it in advance), the Gulf of Tonkin affair,  Operation Northwood, operation ‚Gladio‘ where NATO countries maintained secret armies to commit terrorist attacks and put the blame on the left. The infamous incubator affair, where Saddam’s so-called henchmen trough new-born out of the incubators. But it doesn’t end here, the staging of the attack against Iraq by Colin Powell’s infamous speech before the UN about alleged Iraqi WMDs and the fabricated dossier of the Brits under Tony Blair.

The latest fabrication concerns the US elections. The so-called Russian collusion in the American electoral process was initiated under the Obama administration and puffed up after Hillary Clinton lost. Without the Deep State and the remains of the criminal Obama people in the administration, this engineering could have never taken place in a properly functioning democracy.

The real problems are not the crooks in the different Western administrations but the media. They have been hammering the fake news home to the minds of the people to believe it as reality. Without having presented any evidence in the so-called Russian collusion affair into the American elections nor the alleged Russian nerve gas attack against Skripal and his daughter, the media have established rumors as facts. That’s how Western ‚free‘ media operate, and Western ‚democracy‘ is functioning. For both, the future looks bleak.

For further detailed information about the staged ‚Novichok‘ affair.