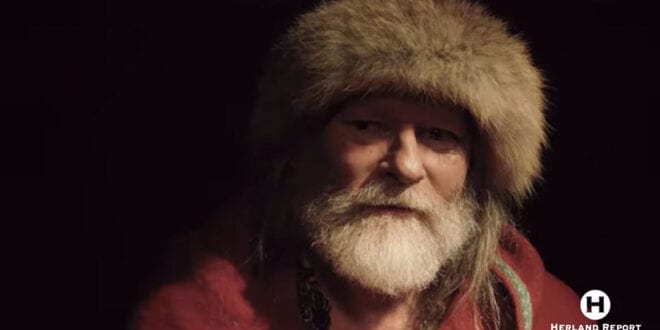 “The Viking pagans plundered and killed in brutal raids. The attack on Lindisfarne in England has been recorded in history as the beginning of the Viking era,” says the modern Viking chieftain, George Olafr Reydarsson.

He is famously known way beyond the borders of Scandinavia, featured in Huffington Post and international media for being one of the experts in the Viking culture, of Norway in particular. Watch it here!

The Herland Report now celebrates 10 million views on YouTube in just a short while and release new interviews about the spectacular Viking Age.

The Viking age in Scandinavia from around 750 to 1050 AD had a fearless and expanding warrior and tradesman culture all over Europe, even to America and into Iraq. They later populated Normandy in France and their descendants conquered England at the battle of Hastings in 1066.

Links to other programs:

Reydarsson explains how the Viking Age began: “It was a dark morning on the 8th of June, 793 AD. Vikings attacked England four years earlier too, this was the second attack. This morning monks on the beaches of Lindisfarne saw Viking sails coming out of the mists.”

“These pagans from the North plundered and killed most of the people in a brutal raid.”

“Hundreds of years earlier, the Romans had been present in Norway taking iron from the mountains. The Vikings learnt how to use the “black gold”. It was not the oil that brought wealth at that time, but the iron. The iron nail was the first to go through the wooden planks of a boat. These nails made it possible for the boat to travel through the North Sea, later the Atlantic.”

Throughout the 700s – 900s, the Vikings lived in a tough culture with tribal, regional kings. They relied on giving gifts in order to buy loyalty.

Reydarsson explains: “They also had to pay their soldiers who wouldn’t fight without payment. In the Viking age, if you served under a king and he paid you ten pieces of silver and another king offered twelve, you would easily swap side. It was also military service to go abroad.”

“Gifts in the Viking era was not gifts of friendship and love like we have today. A gift was always given expecting to get something back. If you didn’t give a gift in return, it was disrespectful behaviour.

There is a story about a gift given to King Harald Fairhair after he became the king of Norway. A guy came from England and King Athelstan saying:

“My king want to give you a gift, great Lord!”

He gave him the sword. The king received the sword and then the messenger said:

“Now you have submitted to my king by accepting this gift of a sword, which means you have to serve my king with this sword.”

Of course, Harald Fairhair didn’t like this, as it made him the servant of the king of England, so the year after his servant came to London and brought a gift to King Athelstan.

He came up to the King with a little boy, lifted that little boy and put him on Athelstan’s lap. He then introduced him as Håkon, the son of Harald Fairhair.

By allowing this child to sit on his lap, he had accepted to raise this boy as his own. That was his way of re-paying the gift. But, the young boy Håkon later became a great King in Norway because of the Christian faith he had learnt in England.”

Harald Fairhair was an excellent and brilliant military leader. He was the first king to unite Norway.

It is said that the trade routes that went from England up through the Norwegian coast and to Svalbard were important already from the years 500-600 AD.

That was from where they got the walrus marine mammal ivory, the animal skins and other valuables.

From the north, they brought a number of goods that became so important in trade along the coast, that one of the reasons why Harald Fairhair wanted to unite Norway was because he wanted to own and control the trade routes.

The local, tribesmen kings, of course, taxed the seafarers at the time.

The famous Viking, Olaf Trygvasson came back to Norway in the year 995 AD, after plundering in Europe and living an international life. The first thing he did was to build Norway’s first church at the coastal island of Mostar.

Reydarsson explains: “The first king in Norway was king long before we had Christian laws. Haakon the son of Harald Fairhair. He was forced by the farmers and tribesmen, even as a Christian king, to take part in pagan feasts.”

“They forced him to drink the blood of a horse. So, he put the cloth over the drinking vessel and hoped that that would save him from the pagan part of ritual.”

The Norwegian kings used to send their kinsmen to the kingdom of Rus in Kiev. The Vikings raiders never went raiding to the East.

They always raided and plundered into the West. They knew that their brothers were in Russia.

Georg Olafr Reydarsson: “The name “Rus” means “the people from the west”. The Russian Minister of Cultural Affairs said sometime back in Moscow that: “We come from the Scandinavian people. They came here and settled here and created our Kingdom.” I think they have a lot to thank our culture for and they raised Olaf Trygvasson. He was raised in Russia as well as Olaf Haraldsson. There was a lot of trading during that time. We learnt from the Russians.”

Hanne Nabintu Herland is a Scandinavian historian of comparative religions, bestselling author, commentator and TV producer, known from the media for sharp analysis and fearless speech.

She was born and raised in Africa, has lived in Europe, South America, in the Middle East, and travel

Previous The VIKING cradle of Odin, Norse history and migrations in Scandinavia
Next The VIKING raids, expansion and the creation of Russia