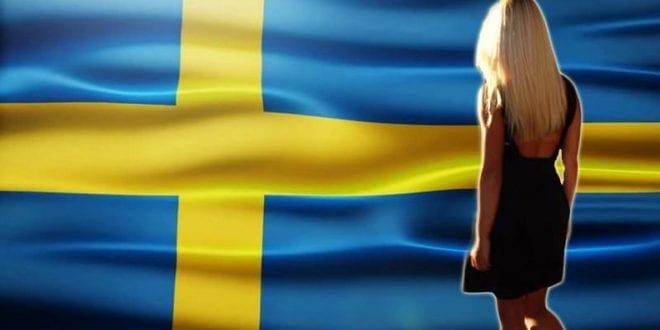 European governments have destroyed the quality of life for their own citizens by importing huge numbers of men from cultures that are too different from European culture to assimilate.

European women especially are paying a very high price for the idiotic policy of the European governments.

Scandinavian readers in particular have asked me to report on the plight of women in Scandinavia as domestic media and police are not permitted to reveal that the extraordinary explosion in rape is due to immigrant-invaders and that the rapists are seldom punished, writes Dr. Paul Craig Roberts in this follow-up article examining the horrible situation in Sweden.

Sweden has the highest incidence of rape of all countries except Lesotho. Norway ranks 10th, which is extremely high considering that there are about 200 countries in the world.

In both Sweden and Norway feminist government officials are more determined to protect the immigrant-invaders than they are to protect women from being raped. The likely reason is that the governments do not want to have to acknowledge the total failure of their policy about which they had ample warnings. The governments protect the rapists as a way of protecting themselves.

Swedish police officer Peter Springare, frustrated by the blackout of migrant-invader crime statistics by the Swedish government which has refused to publish official statistics for over a decade, revealed that almost all of the explosion in major crimes, rapes, and gang-rapes are the result of the government’s immigration policy.

Officer Springare was denounced as a racist, reported to the police and subjected to an internal investigation for inciting racial hatred. A police communications manager actually said that Springare had possibly harmed the public’s trust in the police by telling the truth.

The rape situation is out of control both in Sweden and Norway. Women are actually raped on street corners and on ferryboats despite the presence of other people who fail to intervene either out of fear of violence by the immigrant-invaders or fear of being charged with a hate crime for interfering with the immigrants’ pleasure.

As rapes by migrant-invaders are seldom punished, recently a rape of a young Swedish girl was livestreamed on Facebook while it took place.

Sweden has the highest incidence of rape of all countries except Lesotho. Norway ranks 10th, which is extremely high considering that there are about 200 countries in the world.

In both Sweden and Norway feminist government officials are more determined to protect the immigrant-invaders than they are to protect women from being raped. The likely reason is that the governments do not want to have to acknowledge the total failure of their policy about which they had ample warnings. The governments protect the rapists as a way of protecting themselves.

Why Do Western Governments Favor Immigrant-invaders Over Law-abiding Citizens?

German Chancellor Angela Merkel has never represented Germans. She represents Washington, the CIA, and immigrant-invaders. Recently she gave a speech in the German parliament in which she put the right of immigrant-invaders not to be offended above the free speech of Germans.

The violated dignity of raped German women is not her concern. Neither are the raped budgets of the German taxpayers.

In once Great Britain criminal jihadists are released early from prison because a “compassionate” justice system doesn’t want to marginalize the immigrant-invaders. It is only guiltless Julian Assange who is kept in prison.

The hapless Swedish population are the Europeans who are the worst afflicted by the importation of diversity. Swedish women are afraid to leave their homes. According to some reports only 7% of immigrant-invader rapists are convicted. Conviction would make the poor dears feel unwanted and unappreciated.

The idiot Swedish government actually works to attract gang-rapists into Sweden by advertising the benefits available to immigrant-invaders. Little doubt that the absence of punishment for rape ranks up there with free housing and food.

When the rare and light punishment of migrant-invaders for rape is compared to the destruction of white Julian Assange who was never even accused of rape, it is clear that justice in Sweden is race-based. I know of no statistics to consult, but I bet white ethnic Swedes who rape are punished more severely than immigrant-invaders.

The Obama regime made sure Americans also experienced the joys of multiculturalism by importing large numbers of immigrant-invaders and dumping them on the taxpayers of American communities. There is suspicion that Obama used immigrant-invaders to build Democratic Party constituencies. Minnesota got a lot of Somalis, as did Maine. The presstitute media tell lies about how well it is going for everyone and how the immigrants are restoring and rebuilding declining America. Occasionally a bit of truth gets out.

The strength of a country is in the unity of the people, not in their division. It is extraordinary that as Washington becomes more aggressive abroad, it supports division at home.

With Identity Politics teaching hatred, how is America’s multicultural military going to function? Try to imagine an Arab army consisting of Sunnis and Shiites. The soldiers would be too busy fighting one another to attend to the opposing army. A divided army is what Identity Politics will create for America.

Assimilation is required if a country of diverse ethnicities is not to become a Tower of Babel. In the US an English population was able to assimilate Irish, Italians, and Polish peoples by having periods of no immigration. Moreover, all were from a Christian European culture. Today the situation is much more challenging.

Somalis and Muslims are culturally different from Western populations, and assimilation is considered racist white superiority. The result is separate populations with the recent arrivals claiming to be victims of the white population. It is a sign of insanity that everywhere in the Western world governments are trying to marry unassimilable ethnicities, many of whom are victims of the West’s bombing and invasion of their home countries, with Identity Politics. This is a recipe for the destruction of Western countries.

For the leftwing getting rid of white people is the solution. We see, especially in Sweden and Germany, white governments favoring immigrants over the native ethnic Swedish and German populations.

Dr. Paul Craig Roberts is the chairman of The Institute for Political Economy, former associate editor of the Wall Street Journal, and a well known author of many books. He is also a regular contributor to the Herland Report news site as well as The Herland Report TV Show. He has had careers in scholarship and academia, journalism, public service, and business. He has been awarded the Treasury Department’s Meritorious Service Award for “his outstanding contributions to the formulation of United States economic policy.”
Previous The Rising Dollar and Morgaging America’s Future – Federal Reserve strategy
Next Rwanda President Kagame criticizes African Leaders for lack of Responsibility

The Death of Davos?

Herland Report: Death of Davos? Gone are the glory days when the World Economic …

Herland Report: Billionaire wealth exploded during Covid-19: On May 23, Oxfam International released the …