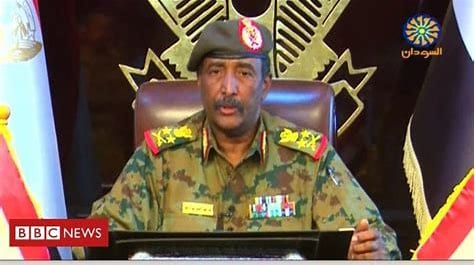 Herland Report: The current instability in Algeria, Sudan and Libya has led to some excited western media coverage heralding a second chapter of the Arab Spring. Those celebrating should be careful what they wish for. new civil war Libya.

The Arab uprisings of 2010-11 and the subsequent years began with great hope but with the partial exception of Tunisia, left only strife, war and state fragmentation in their wake.

One can only wish the protestors much luck, while noting that the record suggests that societies lacking civil society traditions and institutions are unlikely to achieve better governance through mass action, writes Dr. Jonathan Spyer, a fellow at the Middle East Forum and the Jerusalem Institute for Strategy and Security. The article was first published at Middle East Forum. Dr. Spyer is also the author of The Transforming Fire: The Rise of the Israel-Islamist Conflict.(Feature photo: Gen. Abd al-Fatah al Burhan, Sudan. BBC)

Events in Sudan and Libya are of significance, however, in another way. Both countries, like Yemen, and Syria before them, are currently acting as arenas in an ongoing regional cold war.

This contest pits western-aligned Arab Gulf states Saudi Arabia and United Arab Emirates, along with Sisis’s Egypt, against the Muslim-Brotherhood and Sunni Islamist oriented axis of Erdogan’s Turkey and the Emirate of Qatar. In both the Libyan and the Sudanese case, these rival blocs are backing opposing players.

It is of further interest to note that in this contest, each of the two opposing camps makes use of representatives of one or another of the forms of political organization that have proved most of consequence in the Arab world over the last decade.

Outside of the Arab monarchies, and again with the notable exception of Tunisia, there are two forms of political organization of consequence in the Arabic-speaking world: Islamist movements, and authoritarian military regimes.

In every case, the Turks and Qataris back the Islamists. The Egyptians, Saudis and Emiratis, meanwhile, offer their support to the military men.

In these contests, more often than not, the mobilized people in the public square tend to play the role of extras.

They are summoned by the Islamists or the generals to create the illusion of popular will, before being dismissed once again.

In Sudan, popular protest has led to the dismissal of President Omar al-Bashir, one of the longest serving heads of state in the Arab world.

The crowds have not yet dispersed and are demanding that his successor, General Abd al-Fatah al Burhan immediately begin the process of handing over power to civilians. General Burhan, meanwhile, intends to rule for a transition period of up to two years.

As of now, the protestors remain camped outside the army’s headquarters. The army has offered some concessions.

Defense Minister Awad Ibn Auf, who announced the resignation of al-Bashir, stepped down after only a day in office amid calls for a civilian government. But the initiative at least for now appears to be with the armed forces.

This is because the crowds lack coercive power. For as long as the armed forces do not themselves split, the army looks set to wait out the protests, and perhaps in time to come up with a civilian leader of its own liking.

Should the assembled crowds, or an element of them, seek to test the matter by force, the historical record suggests that the beneficiaries will be the representatives of political Islam.

In the matter of armed insurgency at street level, they currently have no peers in the Arabic-speaking world. See Syria, Yemen, Egypt, Palestinian territories, Lebanon etc.

The Egyptians, Saudis and Emiratis are backing the army. Turkey and Qatar, meanwhile, are furious that the Islamist-sympathetic al-Bashir is out.

In Libya, the National Army of General Khalifa Haftar is advancing toward Tripoli – seat of the Islamist dominated, internationally recognized government.

Once again, Egypt, UAE and Saudi Arabia are the backers of Haftar, Turkey and Qatar support the Islamists in Tripoli. In this case, the people are not in the streets. Libya has had its moment of people power. But the power dynamics and the rivalries are familiar.

Israel does not interfere in the internal processes of Arab politics, of course. But Jerusalem’s preferred victor in this intra-Arab struggle is not in doubt.

The backers of the generals are Israel’s closest partners in the Arab world.

Saudi Arabia and UAE share Israel’s primary concerns regarding Iranian ambitions, and its secondary ones regarding Sunni political Islam.

Egypt is concerned mainly with the latter issue, but the intensity of its worries has led to the highest level of cooperation with Israel in the security arena since the peace accords of 1979.

The camp of the generals is the camp of stability, the status quo, and alliance with the West. The other side is with the notion of Islamic revival to the perceived glories of the Islamic past.

Its partisans and allies are by definition the enemies of the West and Israel. The very fact of Jewish sovereignty in Jerusalem is seen as a reminder of how low the Islamic world has fallen.

But it is worth noting that neither of these sides is for civil society, institutions, secularization, representative government.

The forces that do support all these exist but are immensely weak. For as long as this remains the case, the Arabic-speaking world is likely to remain under-developed and dysfunctional – whether generals or Islamists have the upper hand in any particular context.

Remedying the poverty of choices facing Arab publics is, of course, a matter that only Arabic-speaking societies ultimately can address. Until they do so, it will be in the interest of western governments to support the conservative and authoritarian forces preventing the disaster of further victories for political Islam.

As noted above, the Israeli interest in both Libya and Sudan is not in doubt. In Sudan, the departure of President Omar al-Bashir is entirely positive from the Israeli perspective.

Under al-Bashir’s 30-year rule, Sudan made itself available as a conduit for the transfer of Iranian weapons to the Gaza Strip, and acted as a portal for the entry of the Revolutionary Guards into Africa (the IRGC began to train Sudan’s army, and Sudan offered naval facilities for Iran’s use).

For economic reasons, al-Bashir reversed course in 2015. But al-Bashir’s relations with Turkey and Qatar and the army’s support from Egypt, UAE and Saudi Arabia mean that his departure remains without doubt a net positive from the Israeli point of view.

In Libya, similarly, the victory of Haftar, backed by UAE, Egypt and Saudi Arabia, would be a net positive for Israel – it would prevent the emergence and entrenchment of an ally of Turkey, Qatar and the Muslim brotherhood on the coast facing Europe.

Though in this case it should be noted that even if Haftar takes Tripoli, Libya will be far from a return to stability under authoritarian rule. The south of the country remains largely ungoverned and penetrated by elements of the Islamic State.

The west, meanwhile, harbors powerful Islamist militias with considerable public support who are likely to attempt a continued insurgency against Haftar even if his forces take the capital. The article was first published at Middle East Forum.