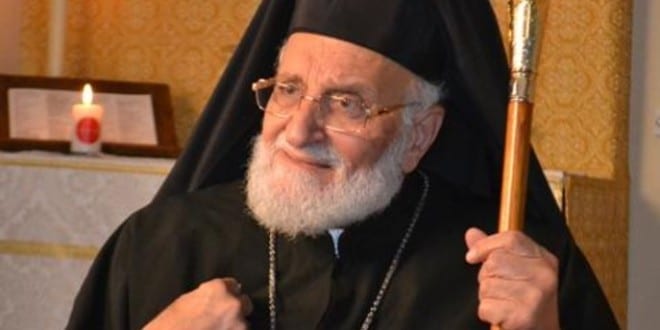 MEMRI translation of interview with the Patriarch in Egypt states:“In a January 7, 2016 interview with the official Egyptian Al-Ahram daily, Gregory III Laham, Patriarch of Antioch and All the East and leader of the Melkite Greek Catholic Church, expressed concern over the fate of Christian communities in the Arab world. The Patriarch is a strong supporter of Christian-Muslim dialogue.[1]

The following are excerpts from the interview:[2] (Photo: alarabiya.net, September 12, 2014)

“Why Has The Arab League So Far Not Fulfilled Its Role In The Syrian Crisis?”

“There is great division [in the Arab world], whether open or secret. If there were a [united] stand, then it would be possible to defeat ISIS, which is a global threat.

“These days I pray, I visit all the churches, and I say: May we have trust in those who agreed in New York to fight terrorism and to resolve the Syrian issue – this despite my fears…

I pray that there might be someone to preserve some good and to work for good in the region. We have had enough blood, tragedy, and destruction. Won’t someone put the people’s suffering ahead of their [own] interests?

I call on the world to stop the killing and the blood[shed]. There are three million children without schools, twenty thousand schools have been destroyed.

“There is a great wound [in Muslim-Christian relations], and we must build mutual trust. These days I am in the midst of writing a letter to the presidents, kings, and emirs of the Arab and Muslim [countries] in order to say to them, in a letter from an Arab [Church] patriarch to the Muslims, that we love you.

Sixty-five years ago, the Catholic Church issued an official document on interfaith relations, and in particular relations with the Islamic faith.

This document has come to be [studied] in Christian schools and institutions, in the monasteries, and everywhere.

I hope that some of the [Muslim] documents [on tolerance] that have been issued, whether from Amman or Al-Azhar, or recently from Syria, will also become widespread.

To date we have still not seen [these ideas] translated on the ground, in the street, in the schools, or in the curricula. The Christians are apprehensive: we hear nice words, but we do not see this [translated] on the ground.

“The wound [of which I have spoken] is that there is a lack of trust that the Muslims today are willing to cooperate in a positive manner with the Christians and to recognize the existence of the other.

Is it reasonable that some Muslims receive aid from the Red Cross and then scratch out [the cross] because it is a [religious] symbol?

And there are some who receive aid from Christians, and when they are asked from whom they received it, say: We got it from some kuffar.

“Back to the ‘wound’: I spoke of the destruction of 150 churches, 33 Christian villages, and the killing of a great number of Christians in northeastern Syria. I said that our remaining alive is a miracle in and of itself.

In truth ISIS… is not Islamic, and I deny that it has any attribute of faith. [Its] takfir extends to Muslims as well as Christians. When it kills Christians, its intention is to spread sectarian strife (fitna)… ”