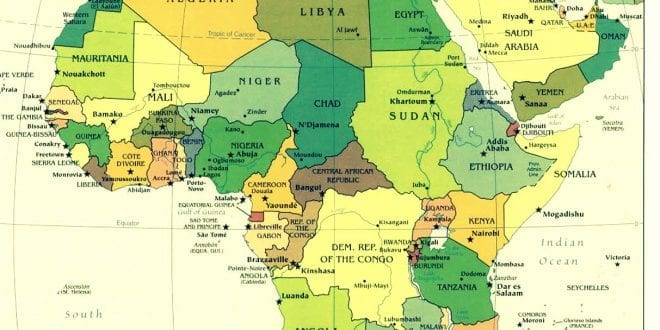 New EU Expansion in Africa under pretext of fighting Islamism?

Herland Report: Joaquin Flores: The upcoming US-EU expansion into Africa to combat China’s massive influence on the continent, places Africa at the center of new attention. We will probably see new wars on the African continent in the years to come.

Joaquin Flores, chief editor of Fort Russ News and the director for Center for Syncretic Studies in Belgrade writes: In reality, these mark increased tensions between elite groups of the EU and US, which cannot agree on the imperial division of the human and natural resources of these African states.

The Herland Report has several TV programs with Fort Russ News editor-in-chief, Joaquin Flores: How to create revolutions, the Kosovo-Serbia war, Syria and Libya. In this TV program, he analyses the European situation in light of the globalist attempt to quench self-determination in nation states. Watch them here. Program 1 on how to start a revolution, program 2 on how to create war Syria, program 3 on Yugoslavia, Serbia, Ukraine and program 4 about Europe. The European Union will be looking more openly at how it can expand its market and investment interests into the Sahel region of Africa under the pretext of combating ‘Islamic Extremism’.

Officially, the EU will take up its concern with what it terms ‘the worsening military-political situation’ in the so-called “Sahel” – a vast African region south of the Sahara desert, stretching from west to east from Senegal to Sudan.

In Brussels, meetings of the Ministers of Foreign Affairs, Defense and Development of the EU countries with relevant representatives of the five African states of the Sahel Group – Burkina Faso, Chad, Mali, Mauritania and Niger will be held.

This African adventurism also represents the congealment of a phenomenon FRN has long covered, the development of an EU Army with a command structure independent of the US’ NATO.

The aggravation of the situation in the Sahel for the first time was directly indicated by the French intervention in Mali in January 2013 under the President Francois Hollande  – so-called operation “Serval”.

In turn, destabilization in Mali was facilitated by the intervention of the West in neighboring Libya in 2011. In July 2014, it was officially announced the completion of the French operation “Serval” in Mali. But by that time it had become clear that the crisis, in addition to Mali, had spread to the neighboring states of the Sahel.

Therefore, the presence of French troops in the region continued in the same composition, but already as part of Operation Barkhan. The latter circumstance indicates an unresolved problem.

It was planned that the forces of the allied natives prepared and paid by Europeans would suppress other natives unfriendly to Europeans.

Now the “Combined Forces of the Sahel” has about 5 thousand soldiers and is partially funded by the European Union. True, nothing is known about any effective offensive operations of these forces against the Islamists.

In the meantime, the EU has created missions for a common security and defense policy in Niger and Mali, where they conduct military exercises and other forms of support for these same “United Sahel Forces”.

The greatest contributions to these missions are Germany and France. Officially, the EU money goes to the provision of “non-lethal equipment, services and infrastructure.” In reality, these are used precisely for either lethal equipment or their maintenance, one way or the other.

The United States nominally supports the operations of Europeans by the intelligence activities of its UAVs from bases in Niger, but has grown increasingly wary of the apparently independent moves of the EU in the Sahel.

As the contradictions of capitalism within the context of the declining rate of profit continue to exacerbate, we can expect US-EU relations to deteriorate specifically over the issue of Africa. On the other hand, the situation in Libya and the Sahel destabilizes neighboring Algeria, which adds foreign policy problems not just to the Europeans in Brussels, and specifically to the French President Emmanuel Macron. Historically, from the former colonies of France, Algeria was most associated with the metropolis. Read the full article here.

Political scientist, Joaquin Flores is the chief editor of Fort Russ News and the director for Center for Syncretic Studies. He is a graduate from California State University in Los Angeles and an accomplished journalist who currently lives in Belgrade.