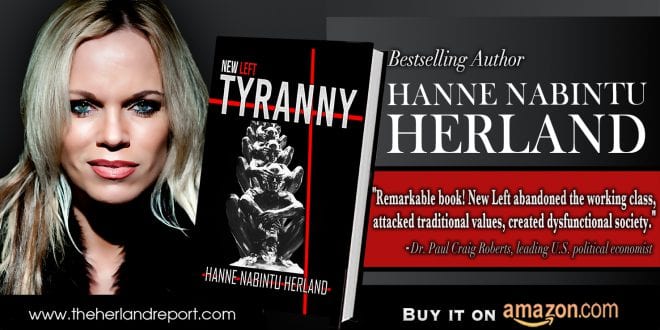 Farmer murder pandemic in South Africa not addressed because victims are white?

Herland Report: The ongoing alleged white genocide and murder pandemic in South Africa is silently happening, while the Western mainstream media does not report much on the atrocities.

The reason: The media cannot talk. It is impossible due to the Leftwing, neo-Marxist philosophy that has permeated Western thinking since the 1960s.

My recent book, New Left Tyranny. The Authoritarian Destruction of Our Way of Life describes in detail how this racist, Leftwing philosophy took hold in the West.

The recent brutal killing of Brendin Horner now produce massive upheaval in South Africa, racial conflicts reaching a new high as brutal murders of white farmers is a massive problem in the country.

The Left has sadly implemented a racist theory (racism: the evaluation of a person only based on the person’s ethnic origin or skin color) that does not permit equal treatment regardless of race and ethnic origin. Rather, it seems to automatically prescribe the role of the victim to anyone with darker skin colors.

This form for racism is now at the core of Leftwing thinking and permeates the very structures of the mainstream media.

This narrative, how widely unjust and racist it sounds, asserts that certain ethnic groups – among them blacks – are not to be held accountable in the same way one would do with a white person.

Sadly, the ethnic card has been implemented since the 1960s, when the neo-Marxist student revolution took place in the United States and Europe.

With its remarkable rebellion against traditional values, the Leftwingers insist that individuals who are black should not be treated the same way one would with a white person.

It represents a total breaking away from the historic, Western principle and ideal of equality regardless of race, ethnic origin, gender, creed or class.

The Leftwing racist theory that divide us into skin colors

Sadly it has come to this, that skin color again is front and central, due to this racist thinking that now makes it almost impossible to criticize a person of color.

Steadily focusing on skin color rather than the Western ideal of equality regardless of race, ethnic origin, gender, creed or class, we now face a situation where skin color has been brought to the forefront of the debate.

You are evaluated on the basis of your skin, not character. The very same happened to Jews, Gypsies and other unwanted ethnic groups during World War II and was at the core of Nazi ideology.

One example of a neo-Marxist philosopher who implemented this type of racism is Jacques Derrida (1930-2004). He is considered the father of neo-Marxist “deconstruction” of traditional Western values and correspondingly, the demonization of these.

He famously speaks about power structures as pairs, one weak and the other strong, male-female, “white” versus “black”, majority versus minority and so on, are all considered opposites, automatically assuming that the power balance is static.

One should “always feel sorry for” Africans, but not for Europeans, as they are automatically considered “the strong” in the power pair.

The “white man” is “always” at the top, while the “black man” is at the bottom. Therefore, the black man needs to be helped, since it is assumed that he cannot help himself.

This was the philosophy that dominated what I call the racist thinking of Derrida. He perfected post-modernism, yet again a Marxist derived class struggle philosophy strongly opposing traditional Western values. I describe this in New Left Tyranny. The Authoritarian Destruction of Our Way of Life.

He sought to find other solutions than the classic, Christian principles that were ideals for hundreds of years, joining the forces with atheist thinkers in attacking traditional Western values.

Derrida’s theories ended up, as we see, actually placing the focus on skin color and ethnic origin as determent of how to treat people.

He reintroduced skin color as a Marxist “class issue” or problem, only about twenty years after Hitler lost the war.

Yet, the color of someone’s skin does not determine who is right or wrong. Why were the Western 1960s’ youth and philosophers such as Derrida so eager to embrace the racism innate in such a theory?

Why did the Marxists include – without criticism – the race theory that later was to re-ignite the Nazi notion that good and bad corresponds to somebody’s skin color?

Instead of pushing for the classical, Western concept of equality, regardless of race, ethnic origin, gender, creed or class, the neo-Marxist movement has ended up producing race theories that give superiority according to the color of skin.

The not so intelligent, Jacques Derrida thereby put to the forefront an amazingly degenerate race theory. And made the second massive mistake by forgetting to reflect upon how power fluctuates; it is not static to one group.

He already knew this from history, as the powerful feudal nobility were replaced by the renaissance bourgeoisie. One group was powerful in a particular historical setting, the new group dominating in yet another time period. In the case of South Africa, the example is well illustrated: If the white elite is replaced by a black elite, justice will automatically be served by the Marxist ANC.

Excusing “black atrocities” becomes the norm while not excusing “white atrocities” in the same manner, all based on the idea that we are not equal and should not be treated equally.

One may, of course, also argue that Derrida’s project maybe was to tear down Western culture by attacking the very pillars that made it strong: The traditional family, marriage, the woman, the belief in equality regardless of race or creed and so on.

This has worked very well.

With a potent dose of male chauvinism with strongly offends me as a woman, Derrida infused into the female brain that she is always discriminated against by men, hated for her femininity, that her child bearing ability is useless, that unless she takes the man’s role in society, she will remain futile.

He did the same to women as he did to blacks: Assuming us to be the chronic weak link in the power structure, that always had to be helped and aided as we are unable to accomplish what white males can do.

The flaw, again, is placing upon the woman the notion of her chronic and eternal role as the victim.

Why women in the 1960s did not see through his misogyny, and lack of respect for femininity remains a mystery.

Maybe they fell for it due to the rampant state of rebellion against traditional values that the New Left promoted, accepting too quickly Derrida’s analysis without reflecting on its anti-humanism. The harsh words from the 1960s feminists clearly demonstrate how taken they were by Derrida’s misogyny.

The 1960s feminism is but one illustrating example. Removing one bourgeoisie class and simply replace it with another does not change anything. The New Left failed to reflect upon that power corrupts whoever is in power, whether the old feudalists, renaissance businessmen or the Marxists. Or, a more sinister explanation, they wished for the end of the West.