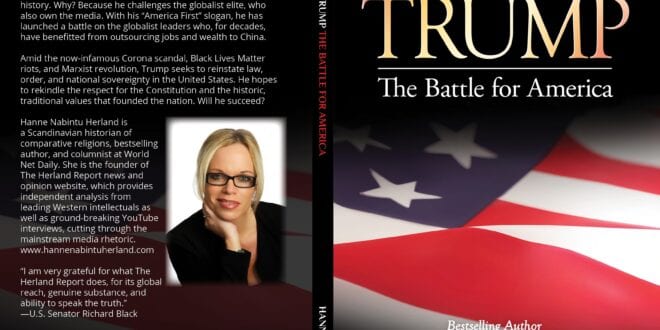 Herland Report: Bestselling Scandinavian author, Hanne Nabintu Herland is out with a new book today, explaining why US President Trump fights for regular Americans and challenges Globalism and the ultra-rich elite hegemony, titled: “Trump – The Battle for America”. Buy it here and get brand new perspectives that explains why President Trump is facing the worst enemies within his own country and why they are fighting him.

The book cuts through the mainstream media rhetoric and brings ground-breaking understanding of the driving forces behind the current near civil war situation in the United States.

Donald Trump may be the most demonized president in US history. Why? Because he challenges the globalist elite, who also own the media.

Trump’s aim is to return the wealth to a dying America and its middle class. Will he succeed? Get the ground-breaking book on Amazon here, Kindle or Paper! Previous NEW BOOK Tom Fitton: A Republic Under Assault: The Left’s Ongoing Attack on American Freedom
Next Farmer murder pandemic in South Africa not addressed because victims are white?