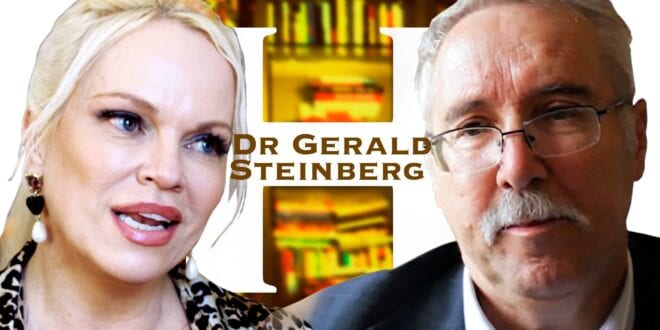 Herland Report: We recently sat down with Dr. Gerald Steinberg, discussing foreign aid a form of drug addiction, the politization of Foreign Aid, as billions are funneled to “poor countries” but never seem to reach the poor. The same countries that receive billions of dollars, tend to remain poor regardless of however much is given.

The current culture of Aid dependency is a form of neo-imperialism, states Dr. Gerald Steinberg in a recent interview with The Herland Report. Watch the exclusive short here.

Dr. Steinberg is a political analyst, professor at Bar Ilan University and founder of NGO Monitor, a think tank focusing critically on the politicization of non governmental organizations.

How much ends up in the elites’ and politicians’ pockets, how much is funneled into corrupt state systems, how much is used to finance terror? These are valid questions that should be addressed.

The US has confirmed it will stop all aid to Palestinians in the West Bank and Gaza, in a step linked to new anti-terrorism legislation, reports the BBC.

Last year, Washington cut hundreds of millions of dollars of aid to the Palestinians supported by USAID, also ending all US funding for the UNRWA, previously giving annually more than any other nation, with $360m in 2017 alone.

Why does Foreign Aid become a problem to such an extent that country after country now shut it down? To which degree is Foreign Aid contributing to a a culture of elitism and corruption?

In this exclusive short from The Herland Report TV, Dr. Steinberg points out that:

“The West has to stop patronizing, stop being neo-imperialistic. Aid needs to be weighed very carefully because it is a form of a drug, it is an addiction.”

“We need to see an end to this political censorship. How can we be free people in an intellectual society, when there are such important topics that we are not allowed to talk about?”

“We are immediately accused of “racism” or other terms, in order to shut down an important discussion.”

“Let’s learn to talk about these issues and tolerate different views. That is not the same as hate speech, not the same as threatening or using violence. We should allow for a realistic analysis of what is actually going on.”

“I see it so strongly, specifically in Norway, but also throughout Western Europe. When I look at Norwegian Government Aid Agencies, Norwegian Christian Agencies, and I look at how they function here in the Middle East, and I see how all of these aid-myths and distortions are in there. The patronizing, the neo-imperialism. Foreign Aid a form of drug addiction. So I say, use Foreign Aid very, very carefully.”

“Don’t let Foreign Aid become an industry and take responsibility. If you say you want to support peace and if it doesn’t work, what are you going to do about it?”

“If you brought violence and terrible suicide bombs, what do you do then? You cannot just walk away because you have parenthood on it. You have responsibility. So don’t go into it unless you think about what will happen afterwards.”

The Herland Report is founded and hosted by Hanne Nabintu Herland, a Scandinavian historian of comparative religions, bestselling author, commentator and TV producer, known from the media for sharp analysis and fearless speech. She was born and raised in Africa, has lived in South America, the Middle East, traveled extensively in Asia, and speaks a number of languages.

Previous People do not realize how close America is to collapse – Gerald Flurry
Next Ola Tunander, PRIO: How media lies destroyed Libya