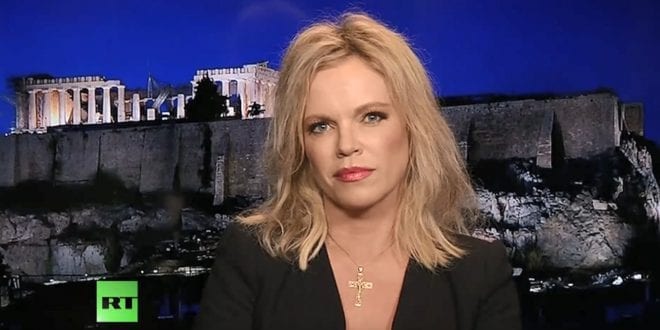 Herland Report: Highlighting Libya again: Blundering Western policy in the Middle East and elsewhere empowered Islamism and led to a massive increase in the persecution of Christians.

“We don’t know what we are doing abroad, any more than at home. The full impact of Western intervention in Libya was recently highlighted during a televised interview of Worlds Apart.

Hanne Nabintu Herland, a Norwegian author and historian who was born and raised in Africa for 20 years, was the guest, Raymond Ibrahim writes.

The horrifying atrocities against Christians that are happening now were unheard of under Gaddafi’s “authoritarian” rule, just as they were unheard of in Saddam Hussein’s Iraq, writes Ibrahim. What we have today is much worse.

At one point while talking about Libya, Herland firmly asserted that “In a just world, the political leaders in the West, that have done such atrocities towards other nations and other cultures, should have been sent to the Hague [International Criminal Court], and judged at the Hague, for atrocities against humanity.”

Before that, the African-born, Norwegian author said:

“Libya is the worst example of Western countries’ assault in modern history; it’s a horrible thing to be a European intellectual and to watch your own political leaders go ahead and engage in something like this.”

”  In Norway, for example, when it comes to something like the Libyan war … [political leaders] sent SMS messages to the other people in parliament; it was never a discussion in parliament, it was an SMS saying “Let’s bomb because someone called from America.”

“We [Norway] bombed 588 bombs over roads, and water, and cities in Libya at that time. And we had a large documentary in Norway, after that, where the fighters, the pilots that flew over Libya and dropped these bombs, they actually said in the documentary that “We were sent up and in many cases weren’t even told what to bomb—just bomb something that looks valuable.”

Herland also pointed out that, according to UN figures, Gaddafi’s Libya was once the most prosperous nation in Africa.

While Oksana Boyko, the host, sometimes disagreed with Herland, she agreed about the West’s counterproductive role, pointing out that Gaddafi “was very active in trying to advance women’s rights, he brought a lot of women into universities and the labor force [a thing few people in the West know, as usual, thanks to the “MSM”] and now what people and women in Libya are facing is Sharia [Islamic law], with the possibility of some of them being sold to ISIS fighters as virgin brides.” Indeed, that the jihadis and other “ISIS” type militants gained the most from Western intervention in Libya cannot be denied.  Simply looking at the treatment of Christian minorities—the litmus test of the radicalization of any Muslim society—proves this.

Segregating Christians from Muslims is a common procedure around the Islamic world.  For example, last November, after members from the Islamic organization Al Shabaab hijacked a bus carrying 60 passengers in Kenya, they singled out and massacred the 28 non-Muslim passengers, the Christians.

In October 2012 in Nigeria, Boko Haram jihadis stormed the Federal Polytechnic College, “separated the Christian students from the Muslim students … and then proceeded to shoot them or slit their throat,” killing up to 30 Christians.

According to Hanna Aziz, a Copt who was concealed in his room when the other Christians were seized in Libya, “While checking IDs, Muslims were left aside while Christians were grabbed….  I heard my friends screaming but they were quickly shushed at gunpoint. After that, we heard nothing.”

Three of those seized were related to Aziz, who mournfully adds, “I am still in my room waiting for them to take me. I want to die with them.”

A few days earlier, also in Sirte, Libya,  a Christian father, mother, and young daughter were slaughtered reportedly by Ansar al-Sharia—the “Supporters of Islamic Law,” or the Libyan version of ISIS that rose to power soon after the overthrow of Gaddafi.

On December 23, members of the Islamic group raided the Christian household, killing the father and mother, a doctor and a pharmacist, respectively, and kidnapping 13-year-old Katherine.  Days later, the girl’s body was found in the Libyan desert—shot three times, twice in the head, once in the back (graphic images here).

As for motive, nothing was stolen from the household, even though money and jewelry were clearly visible.  According to the girl’s uncle, the reason this particular family was targeted is because “they are a Christian family—persecuted.”

In short, as I wrote nearly a year ago, it continues to be “open season on Christians in Libya.”  In February, 2014, after Ansar al-Sharia offered a reward to any Benghazi resident who helped round up and execute the nation’s Coptic Christian residents, seven Christians were forcibly seized from their homes by “unknown gunmen,” marched out into the desert and shot execution style some 20 miles west of Benghazi (graphic pictures appear here).

Days later, another Coptic Christian, Salama Fawzi, 24, was shot in the head while unloading food in front of his grocery stand in Benghazi, again, by several “unknown gunmen.”  And the day after that, a corpse was found, believed to be that of another Copt—due to the small cross tattooed on his wrist traditionally worn by Egyptian Christians.

This is to say nothing of the churches attacked, of Christian cemeteries desecrated, and of 100 Christians—including Western ones—arrested, tortured (some dying) for possessing Christian “paraphernalia” (like Bibles and crosses) in the post “Arab Spring” Libya the Obama administration and its allies helped create.

As previously mentioned, Muslim persecution of Christians is the litmus test of how “radical” an Islamic society has become.  Thus, in all those Mideast nations that the U.S. and its Western allies have interfered—Iraq, Egypt (under Morsi), Libya, and ongoing Syria—the increase of Christian persecution there is a reflection of the empowerment of forces hostile to everything Western civilization once stood for.