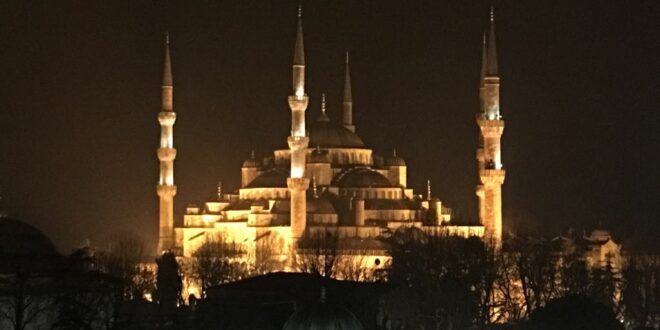 Herland Report: Islamic Religious Syncretism: Not only does Islam claim Abraham, Moses, and Jesus; it apparently claims post biblical figures, such as Saint George, as well.

So states a recent article on My London, the real point of which is apparently to assert Christian and Muslim “commonalities.”

Thus, we learn that “on St George’s Day, which in Eastern Christianity is marked on May 6, Muslims in the area [of Nazareth] join Christians in their venerations of the saint,” writes Islamic scholar and bestselling author, Raymond Ibrahim.

Judaism also finds its way into this article on religious syncretism: “According to some Sufi traditions, the [Hebrew] Prophet Elias, Al-Khidr [a character in the Koran], and Saint George are all the same person. They believe Elias reappears at different times in human history under different names to help stricken believers in times of crisis.”

The entire article is a testimony to the widely entrenched conviction that, because Judaism, Christianity, and Islam share many of the same characters, creating rapprochement between the three faiths is not just easy; it’s the most natural thing to do.

Left out of this calculus is the all-important fact that Islam does not treat biblical characters the way Christianity does.  Christians accept the Hebrew Bible, or “Old Testament,” as it is. They do not add, take away, or distort the accounts of the patriarchs that Jews also rely on.

Islamic Religious Syncretism: Conversely, while also relying on the figures of the Old and New Testaments—for the weight of antiquity and authority attached to their names—Islam completely recasts them in a manner that validates itself and invalidates Judaism and Christianity.  This would seem to burn rather than build bridges.

Consider, for example, Islam’s treatment of Jesus (‘Isa in the Koran).  Not only does Islam vehemently deny Christ’s sonship to God, a new book on Islamic sources inadvertently underscores the fact that ‘Isa is the antithesis of Jesus—his doppelganger.

Although Muslim Sources of the Crusader Period by professors James E. Lindsay and Suleiman Mourad is full of important historical documents from that era, including first time translations, the writings of Ibn ‘Asakir (1105-1175)—an influential Islamic scholar who also authored the popular Forty Hadiths for Inciting Jihad—on Jesus, based on established hadiths, are germane to our topic.

From beginning to end, Ibn ‘Asakir, like all other Muslim scholars before and after him, uses Jesus to validate Islam and invalidate the actual faith founded by Christ.

According to these Muslim accounts, Jesus will indeed return—Christian “bridge-builders” to Islam can be happy about that—but only to “break the crosses, slaughter the pigs, end the jizya tax on non-Muslims, making warfare against the People of the Book (e.g. Jews ,Christians, Zorastrians etc.) and others licit…” (p. 158) In short, Islam’s Jesus seems to be a jihadist on a par with ISIS.

Here are a few selections from Ibn ‘Asakir’s “biography” of Jesus/‘Isa (from Muslim Sources of the Crusader Period):

He quotes Muhammad asserting that whoever is willing to make him, Muhammad, Christ’s equal, as well as contradict the oldest Christian Creed (1 Cor. 15: 3-7), will go to heaven:

“When a woman says to Jesus, “Blessed is the womb that bore you and the breast that suckled you,” a shocked Jesus replies: “No, but blessed is he who reads the Qur’an and follows what is in it” (p.159).

Islamic Religious Syncretism: In several of these hadiths, Muhammad appears intent on making himself Jesus’s equal.  Thus when his child-bride, Aisha, asks the prophet: “If I outlive you, would you permit me to be buried beside you?” “No,” responds Muhammad: “in that place there is only room for my grave, for Abu Bakr’s grave [Muhammad’s companion and successor, or first caliph], for ‘Umar’s grave [Muhammad’s companion and second caliph], and for the grave of Jesus son of Mary” (p.160).

In another account, Muhammad says, “The biblical prophets are siblings of the same lineage.  I and Jesus too are siblings because he prophesied me and there are no prophets between me and him (p.161).”

In yet another account, Ibn ‘Asakir presents Jesus as “praying behind” yet another caliph (Muawiya I): then, “after Jesus finishes his prayer, he will take his lance, go toward the Antichrist and kill him.  Then Jesus will die and the Muslims will wash him and bury him” (p.161).

Such is the transformation—or mutilation—that Jesus has undergone in the Muslim tradition.  And Christians are supposed to see this as a possible “bridge” to Islam, a source of “commonalities”?

It’s the same, incidentally, with other biblical characters.  Consider Abraham (Ibrahim), whom this entire “Abrahamic” movement is named after.  While Jews and Christians focus on different aspects of Abraham—the former see him as their patriarch in the flesh, the latter as their patriarch in faith or in spirit (e.g., Gal 3:6)—they both rely on the same verbatim account of Abraham found in Genesis.

The Muslim account, however, introduces and exemplifies the hate Muslims are obligated to have for non-Muslims:  “You have a good example in Abraham and those who followed him,” Allah informs Muslims in Koran 60:4; “for they said to their people, ‘We disown you and the idols that you worship besides Allah. We renounce you: enmity and hate shall reign between us until you believe in Allah alone.’”

In fact, this verse is the cornerstone verse that all “radical” Muslims, especially of the Islamic State, cite as proof that Muslims must hate all non-Muslims.  In other words, far from serving as a bridge between Islam and Judaism and Christianity, the Muslim Abraham  teaches Muslims to hate Jews and Christians.

One can go on and on: according to Islamic traditions, Mary, the mother of Christ, is Muhammad’s “wife” in heaven—yet another characterization that would seem to sever hardly build “bridges,” especially for Catholics.

Surely it’s a curious thing: when certain people—namely, whites—“appropriate,” say, the superficial dress or costume of another people, woe, all is woe.  But when Islam appropriates and completely perverts the central figures of two faiths, Judaism and Christianity, Jews and Christians are supposed to feel good about it, see it as an opportunity for “reconciliation” with Islam.  Interesting how that works.

To be clear, the Muslim appropriation and subsequent mutilation of biblical figures is a source of problems, not solutions. It is only the secular mindset, which cannot rise beyond the surface fact that three religions claim the same figures—and so they must all eventually “get along”—that does not and never will get it.  The Saint George article on My London—which spends an inordinate amount of time cracking jokes about drinking in pubs—is a perfect example.

Previous Ex-Muslims of Norway leader, Cemal Yucel on Islam and the Picture Ban
Next Welcome to hundreds of new subscribers from all over the world!