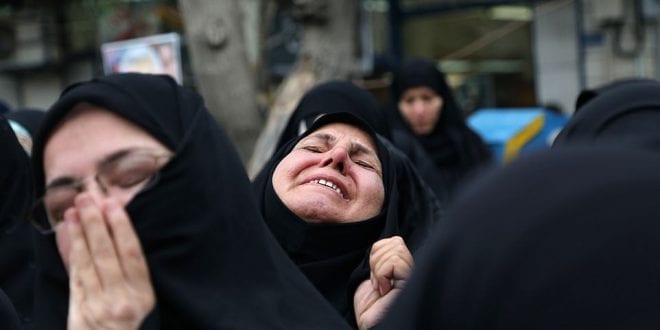 Islamic Persecution of Christians seldom criticized in the West

Herland Report:  Why does the Liberal West so often refuse to criticize Islamic persecution of Christians in the Middle East?

The past years, we have seen a near genocidal situation for minorities, millions of Christians leaving the Middle East.

At the same time and since the 1980’s, the Wahhabi radicalization of Islam has swept through the Middle Eastern Muslim communities, fueling intolerance and lack of respect for the multicultural fabric so characteristic for the region.

Why is this so seldom addressed in the West? No reaction by Hollywood actresses when millions of Christians are persecuted out of the Middle East?

Their view is Islamist and radically intolerant of minorities, which everybody knows. Why do Liberal Westerners almost automatically avoid criticizing the radical Islam intolerance of Jews, Christians, Bahai’s and other minorities?

The neo-Marxist, Progressive Liberal portrayal of Muslims as “chronic victims” of “white Westerners” simply does not correspond with reality. Skin color or ethnic background has never determined who is right or wrong.

The view of Israel is an example of that. Regardless of what Israel or “Jews” for that matter do, it is “always wrong”. Islamic Persecution of Minorities hardly mentioned.

The world is extremely pluralistic with complexities and perspectives that makes picking sides ala Hollywood’s Walt Disney seldom wise. There is “good and bad in everyone”.

The need to segment the world into Walt Disney like divides between “the good nations” and “the evil”, also serves another and vital interest. It allows nations to create outer enemies, which often is needed. This is the case for Iran as well as Israel, and the US for that matter.

We examine this tendency in this article, and assert that it is extremely dangerous to do just that: Robert McNamara warned against this in the documentary The Fog of War, the support of one of the parties in a war instead of attempting to address the full picture.

Are Liberals completely incompetent, swallowed by media propaganda or lack fundamental knowledge of the realities on the ground?

Or is it that they actually find it convenient that Jews, Christians, homosexuals and other minorities are subjected to Islamic Persecution of Christians at a horrendous level in the Middle East?

Islamic scholar and bestselling author of Egyptian heritage, Raymond Ibrahim, who also is a regular at The Herland Report, is fluent in Arabic and examines the Arab news press and creates articles for a Western audience in English.

The material he uncovers, often represents the very opposite of what we hear in the Western press. Some excerpts from stories of Christian persecution under the Palestinian Authority, Gaza and West Bank:

“The moment Hamas took control of the Gaza Strip, they started persecuting us, ruining our churches and forcing Christians to convert to Islam.” Such are the recent recollections of Kamal Tarazi, a 60-year-old Christian man from Gaza, now living in the streets of Nazareth.

Before fleeing, he tried to resist the Islamist takeover, including by calling on Muslims and Christians to unite against Hamas.  As a result, “I was jailed several times. Do you know what a Hamas prison is? It is pure torture.”

The report adds that “the Islamic group decided to keep him alive to avoid depicting themselves as persecutors of the local Christian population, something that could potentially anger the international community.”  He was eventually released, fled the region, returned, got imprisoned again, and fled again, permanently. “I am sure there are no more than 500 Christians left in Gaza,” he offers, “and it is just part of the general trend.”

His account is a reminder that, while reports on the persecution of Christians emerge regularly from other Muslim majority regions around the world, little is often mentioned of those Christians living under the Palestinian Authority.

This is not because they experience significantly less persecution than their coreligionists.  Open Doors, a human rights group that follows the persecution of Christians, notes in its most recent report that Palestinian Christians suffer from a “high” level of persecution, the source of which is, in its words, “Islamic Oppression”:

“Those who convert to Christianity from Islam, however, face the worst Christian persecution and it is difficult for them to safely participate in existing churches. In the West Bank they are threatened and put under great pressure, in Gaza their situation is so dangerous that they live their Christian faith in utmost secrecy….The influence of radical Islamic ideology is rising, and historical churches have to be diplomatic in their approach towards Muslims.”

Indeed, Christianity is, by all counts, on the verge of disappearing in the place of its birth—literally, as this includes Bethlehem, scene of the Nativity—thereby giving the otherwise seasonally relevant words, “Silent Night,” a more tragic meaning. Read the full Ibrahim article here.