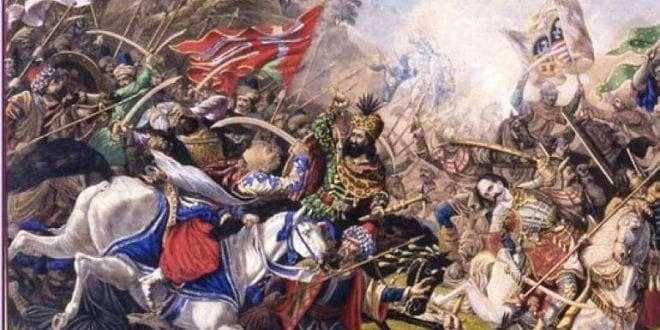 Herland Report: What accounts for the stark difference between how Western and Eastern European nations respond to Muslim migrants?  The former—including Great Britain, Germany, and Scandinavia—have been welcoming, whereas the latter—including Poland, Hungary, and Czechoslovakia—have not, often vociferously so. Part of the answer, which may surprise some, revolves around history: Eastern European nations have a long and intimate history with, and thus understand Islam better than Western nations, writes Islam scholar, Raymond Ibrahim, a regular at The Herland Report.

All quotes and facts of history appearing in the following article are documented in the author’s new book, Sword and Scimitar: Fourteen Centuries of War between Islam and the West.

Those arriving have been raised in another religion, and represent a radically different culture. Most of them are not Christians, but Muslims.  This is an important question, because Europe and European identity is rooted in Christianity….

We don’t want to criticize France, Belgium, any other country, but we think all countries have a right to decide whether they want to have a large number of Muslims in their countries. If they want to live together with them, they can. We don’t want to and I think we have a right to decide that we do not want a large number of Muslim people in our country.

We do not like the consequences of having a large number of Muslim communities that we see in other countries, and I do not see any reason for anyone else to force us to create ways of living together in Hungary that we do not want to see….

The Hungarian prime minister Victor Orbán went on to invoke history: “I have to say that when it comes to living together with Muslim communities, we are the only ones who have experience because we had the possibility to go through that experience for 150 years.”

Orbán was referring to Islam’s conquest and occupation of Hungary from 1541 to 1699.  Then, persecution and terrorism were rampant.

Nor was Hungary alone. Muslims conquered, occupied, and terrorized most of southeastern Europe—often in ways that make Islamic State atrocities seem tame.

In 1354, the Ottomans—who were more committed to the principles of jihad than any of their Muslim predecessors—first crossed the Dardanelles and established a foothold in Eastern Europe.  Immediately, “[w]here there were churches he [Suleiman, son of Sultan Orhan] destroyed them or converted them to mosques,” writes an Ottoman chronicler: “Where there were bells, Suleiman broke them up and cast them into fires. Thus, in place of bells there were now muezzins.”

Before long the Balkans were conquered in the name of jihad.  The atrocities committed before, during, and after these conquests are well documented.  For example, writing around 1438, Bartolomeo de Giano highlighted the “calamitous and lamentable slaughter that we see in these days.” Everywhere they conquered, the jihadis erected “great mountains of [Christian] heads,” and “so great a quantity of bodies lay consumed, partially rotted, partially devoured by dogs, that it would seem unbelievable to anyone who had not seen it with their own eyes.”

Survivors were either enslaved to “serve their [masters’] wicked and filthy pleasures” and/or forced into becoming “Saracens [Muslims] who will later be enemies of the Christians.” From Hungary, three hundred thousand were enslaved and “carried off in just a few days”; from Serbia and Transylvania one hundred thousand were hauled off. “The massive enslavement of slavic populations during this period gave rise, in fact, to our word ‘slave,’” comments one historian; “in Bartolomeo’s time, to be a slave was to be a Slav.”

Young and old everywhere were seen being “led away in iron fetters tied to the backs of horses,” continues Bartolomeo, and “women and children were herded by dogs without any mercy or piety. If one of them slowed down, unable to walk further because of thirst or pain, O Good Jesus! she immediately ended her life there in torment, cut in half.”

The slave markets of Adrianople, then-capital of the Ottoman sultanate, were so inundated with human flesh that children sold for pennies, “a very beautiful slave woman was exchanged for a pair of boots, and four Serbian slaves were traded for a horse.”

Similarly, the Ottomans’ chief Muslim allies, the Tatar khanate of Crimea—described by Christians as the “heathen giant who feeds on our blood”—enslaved and sold “like sheep” some three million Slavs (Poles, Lithuanians, Russians, and Ukrainians) between 1450 and 1783.

In 1630, a Lithuanian described how Muslim masters “castrated” the men and “cut off their ears and nostrils, burned cheeks and foreheads with the burning iron and forced them to work with their chains and shackles during the daylight, and sit in the prisons during the night; they are sustained by the meager food consisting of the dead animals’ meat, rotten, full of worms, which even a dog would not eat. The youngest women are kept for wanton pleasures.”

Muslim aggression and atrocities against Eastern Europeans culminated with the slaughter if not genocide of any Christian the sultan’s scimitar could reach (Serbians, Bulgarians, Greeks, Armenians, Assyrians), and ended only with the demise of the Ottoman sultanate soon after World War I.

It is this long history of living with and under Islam—that is, personal and direct experience, as amply documented in Sword and Scimitar—that has caused several Eastern European nations to reject Muslim migrants.

Of course, some will argue that the aforementioned history does not pertain to current realities.  This would be a plausible position if not for the fact that every Western city that contains a large Muslim population has experienced a dramatic rise in terrorism and crimes in general—most of which are fueled by that old Islamic hostility for infidels.

In Germany and the United Kingdom, crime and rape have soared in direct proportion to the number of Muslim “refugees” accepted.  Sweden alone—where rape has increased by 1,472% since that country embraced “multiculturalism”—is reportedly on the verge of collapse.

When it comes to considering its relationship with Islam, the West would do well to revisit and learn from history—over a millennium of it.  Otherwise it will have to keep learning the hard way.