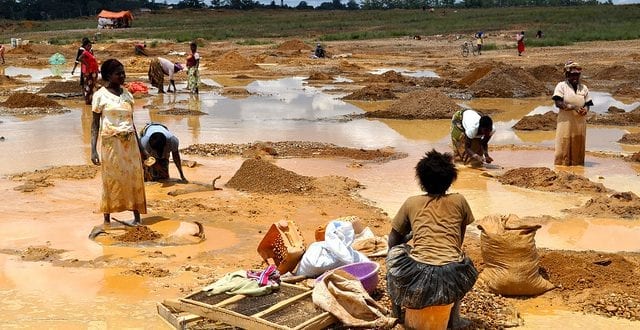 Herland Report: In light of the current globalist trend where financial acrobats are rigging and manipulating the financial markets in an unprecedented scale, Africa is a continent worth looking at.

Hedge fund managers such as George Soros has long been invested in the continent, this article explains how.

Anglo-Dutch cartels in oil, strategic minerals, and diamonds, have looted and despoiled Africa for decades after that continent’s nominal independence from the European empires. “In recent years, the destruction has intensified under the cover of a reform movement guided by this same imperial force, aiming to end national sovereignty and finally erase all resisting African governments.

Headed by billionaire speculator and narcotics promoter George Soros, in open collaboration with the cartels themselves, this movement is leading the continent into chaos, perpetual war, enforced backwardness, and unchecked pandemics and starvation. (Illustration: Tumbir)

The Open Society Institute and related Soros enterprises fund and herd uncountable thousands of private groups and globalist agencies, seeking to overthrow African governments and seize natural resources, in the name of fighting tyranny and corruption.

One side of this nightmare is the Extractive Industries Transparency Initiative (EITI).

It began when the George Soros organization known as Publish What You Pay, aided by propaganda from the Soros-funded Global Witness group, demanded that nations with valuable natural resources be compelled to turn over to mutinational cartels and to the British government, all records of their transactions on these resources — so as to stop bribes!

In 2002, British Prime Minister Tony Blair, in Johannesburg, announced he had accepted this Soros proposal. In 2003 Blair formed the EITI as a London-based global agency, which would seek to pull in the United States and would attempt to enforce open domination over world resources.

In 2006, EITI’s governing secretariat was set up in Norway and placed under Soros management, with money from Open Society Institute and EITI board members from Soros agencies Publish What You Pay, Revenue Watch Institute, and Global Witness.

To launch EITI as a Soros arm, then-World Bank president Paul Wolfowitz (an architect of the Iraq catastrophe) came to Norway and did a press conference on the need to direct the “revenue stream from extractive industries” in “developing countries.”

“Conflict diamonds” have provided the propaganda power behind the Soros Initiative.

As world opinion was revulsed by accounts of genocidal wars over African diamonds, gems used as currency by mafias, mercenaries, and militias, the Soros group Global Witness, in tandem with the top diamond companies, shaped the issue of “blood diamonds” towards London’s objectives.

In 2000, the {World Diamond Council} was set up in Brussels, Belgium, led by DeBeers (historically Cecil Rhodes/Rothschild) of London and South Africa; by DeBeers agent Maurice Tempelsman, head of New York-based Lazare Kaplan diamond company; and by Israeli diamond billionaire Dan Gertler and his family. The World Diamond Council’s “reforms” of the industry’s looting are approved by Global Witness and are an integral part of the EITI’s agenda.

Belgian-born Maurice Tempelsman started out in the former Belgian Congo. After the 1961 murder of nationalist prime minister Patrice Lumumba, Tempelsman hired as his liasion to the replacement government the former CIA station chief there, Larry Devlin, who had been ordered to murder Lumumba but claims others did it. From his Congo base, Tempelsman participated in the work-up to the British coup against Ghana’s nationalist President Kwami Nkruma.

Tempelsman became the number one U.S.-based affiliate of DeBeers and London’s world diamond cartel. Tempelsman lived with President John Kennedy’s widow, Jacqueline Kennedy Onassis, from the mid-1970s until her 1994 death.

A power in the post-JFK Democratic Party alongside Felix Rohatyn and George Soros, Tempelsman is a director of the National Democratic Institute component of the National Endowment for Democracy that funds Global Witness and many other Soros fronts.

Israeli rightwinger Dan Gertler is the grandson of Moshe Schnitzer, founder of Israel’s diamond industry, and the nephew of Schmuel Schnitzer, vice chairman of the World Diamond Council in charge of the Council’s liaison with governments and the UN.

In the Bush-Cheney era, Gertler has taken over from Maurice Tempelsman the role of unofficial representative of the U.S. government in the Congo. In partnership with other Israeli billionaires and with rightist politicians such as Avigdor Lieberman, Gertler arranged with former Congo president Laurent Kabila to set up a diamond monopoly in exchange for Israeli arms and military training.

The Bredenkamp deal allowed Gertler to become top shareholder in London’s Camec, the copper and cobalt mining giant in Congo.

With this apparatus behind him, George Soros is doing to Africa what he did in his native Hungary in 1944, when he helped the Nazi occupiers in the extermination of the Jews.” First published in Larouche.

Previous The United States Has Joined the Ranks of Shithole Countries
Next The Black Lives that Don’t Matter at All: African Christians Murdered in Churches