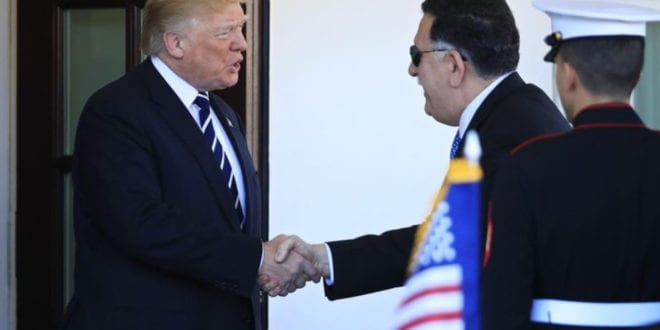 Military build-up in Libya: The free elections of the Libyan people, upcoming in March 2018, is threatened as Libyan politicians allegedly seek to extend powers by receiving “personal protection” in the West.

Recently Libyan PM and head of the Libyan national reconciliation government, Fayez Al-Sarraj, has travelled both to the USA and Italy without getting the support he wished for, as stated by sources on the ground.

The aim is said to have been “personal protection” in order to stay in power, outside of the scope of Libyan law, according to Al Arabiya.

Al Arabiya quoted: “Al-Sarraj’s visit to Washington was followed by a series of questions after the British newspaper “The Guardian” quoted sources as confirming that he had sought personal protection for him and his government in Tripoli from the US administration. Al-Serraj tried to downplay public criticism of his visit to Washington with brief words about the outcome of his visit.

Again, the ongoing problem is Western intervention in Libyan local matters, ever since the ousting of Muammar Gaddafi: Instead of leaving it to the Libyan people to choose how they would like to be governed, we see little respect for Libyan national sovereignty.

For quite some time, the idea has been that “merging powers between Al-Sarraj and Khalifa Haftar would solve the Libyan situation”, hope has been high, at least among the Western nations involved. The question remaining whether free democratic elections really will be permitted in March, 2018.

“The General Command of the Armed Forces has for more than a year engaged in intensive and direct communication with the international community and countries interested in working in Libya and provided initiatives to push the political agent forward and took the necessary steps to prepare for urgent elections. “Without achieving anything”, the general commander of the Libyan army, Khalifa Haftar, announced, according to Al Arabiya.” “He also stressed that “all indicators warn that Libya is entering a dangerous stage of the sharp deterioration in all local affairs, and may extend the risk to the regional areas without touching the people of local or international institutions that claim to be keen to address the situation any proactive measures serious process.”

The General stressed that he considered the dialogue of the Libyan parties a “dead letter”.

“Special forces of Western countries are already in action in Libya – the US has carried out airstrikes on Isis and other Islamist terrorists.

But any formal deployment of forces by Nato faces problems.

There is the danger of mission creep: being sucked into a violent and semi-anarchic quagmire, as well as the fact that the Government of National Accord, headed by Fayez al-Sarraj, which Nato is supposed to prop up, has very little territory and very little power,” as stated back in February.

“What is important, is that the Libyan elections represent the will of the Libyan people, stated the foreign ministers of Egypt, Tunisia and Algeria in a recent meeting, stressing that the political solution must be based on the will and compatibility of all components of the people of Libya without exclusion or marginalization of anyone, and the importance of uniting all national institutions, including the Libyan army.”