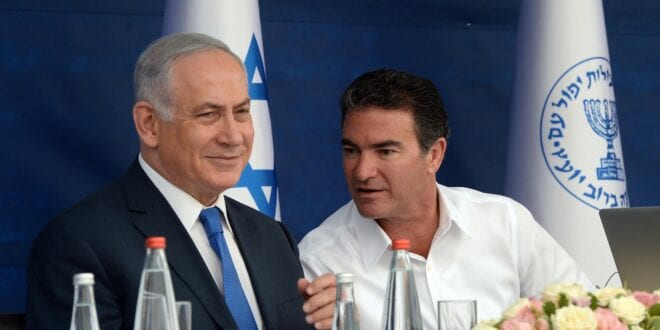 Herland Report: Netanyahu in first known meeting with Saudi Crown Prince Salman: Groundbreaking meeting said held in presence of US Secretary of State Mike Pompeo, who is seeking to persuade Riyadh to normalize ties with Jerusalem, reports Times of Israel.

In the first visit of its kind, Prime Minister Benjamin Netanyahu traveled to Saudi Arabia on Sunday, where he met with Crown Prince Mohammad bin Salman and US Secretary of State Mike Pompeo, Israeli and Saudi officials said Monday.

Netanyahu was on the ground in Neom, a Red Sea city, for more than three hours for the first known high-level meeting between an Israeli and Saudi leader. He was accompanied by Mossad intelligence chief Yossi Cohen, Hebrew media reports said.

“The fact that the meeting took place and was made public — even if it was in only a semiofficial way — is something of great importance.” He said it indicated the growing “warm acceptance of Israel by the Sunni world,” and that this was “something our ancestors dreamed about.”

Netanyahu in first known meeting with Saudi Crown Prince Salman: Pompeo earlier on Monday said he had held a “constructive” meeting with Saudi Arabia’s crown prince the night before, as he wrapped up a seven-nation tour that included stops in Israel and Gulf nations. He made no mention of the presence of the Israeli leader.

“Pleasure to meet with Saudi Crown Prince Mohammed bin Salman. Our security and economic partnership is strong and we’ll continue to harness it to advance efforts to counter malign Iranian influence in the Gulf, economic goals under the Vision 2030 plan, and human rights reform,” tweeted the top American diplomat, describing the meeting as “constructive.”

There was no formal announcement by the participants about the meeting. However, in a hint at the trip, an aide to Netanyahu tweeted a report about Defense Minister Benny Gantz launching a probe into a naval acquisitions scandal, writing that “Gantz is playing politics while the prime minister is making peace.”

Senior Hamas official Sami Abu Zuhri demanded an explanation from Saudi Arabia, calling the alleged visit “an insult to the nation and an invitation to attack Palestinian rights.”

The Kan public broadcaster reported that the talks focused on Iran and the incoming Biden administration.

Netanyahu and Cohen traveled to Saudi Arabia on the private plane of businessman Ehud Angel — the same jet that the prime minister used for a covert visit to Oman last year, according to Kan. Read full article here.