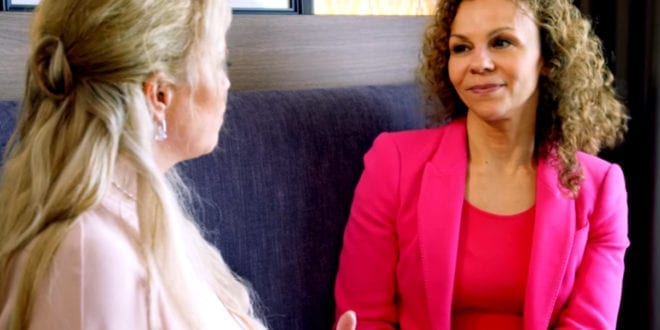 Her blatant anger over how the West and the US especially is participating in funding terrorists who destroy countries in the Middle East.

This permeates her view as she returns. Watch the TV interview here.

We address both the Libyan war, Muammar Gaddafi, Hillary Clinton’s role, the use of mercinaries in both wars and the Syria war. The interview also touches on what is going on in Iraq.

First and foremost, the question remains why the Western media only reports one side of the story of what is going on in the Middle East. Why only portray the wars in a biased way?

It used to be the aim of critical journalism to be unbiasedly covering conflicts from various points of view. The aim was to get a balanced view on a variety of topics. Objective reporting is somehow not the aim anymore.

At The Herland Report we attempt to address several perspectives on the wars in the Middle East, as reality is pluralistic and complex. Regarding the Syria war, please watch our programs with the Norwegian TV personality, Kari Jaquesson here and here.

Kari Jaquesson went to Syria: Kari Jaquesson left her safe haven in Norway and went to war torn Syria to meet with the minorities and Christian groups to better understand what is really going on.

“I’m on my way to Syria. For the first time in my life I am going to a country at war. I have been following the crisis, both through national and international media, both commercial and independent. The information is fragmented and unbalanced.”

“The voice of ordinary Syrians is nowhere to be heard. I want to see for myself and hear what the people in the streets think, unfiltered, with no intermediary.”

“There will be a lot of impressions, I will come to see and hear many things that are impossible to prepare for,” said Kari Jaquesson in this interview with the Herland Report.

Kari Jaquesson: – Many in the public have probably been surprised about me expressing such strong opinions about Syria and other topics.

They know me as the smiling “fitness lady” on television. However, there is no conflict between being a happy, smiling lifestyle coach and motivator and being an engaged citizen and highlighting serious issues. I’m making people exercise with a smile just as always, and have been active in politics and social debate for years. But lately I have taken bigger steps and it is getting noticed. Kari Jaquesson went to Syria: Politics is far too important to be left to politicians.

Today, we are seeing more and more how politicians make several decisions that in no way benefit the people or the country, politics and decisions that harm and kill people in countries that have never threatened or attacked us.

But for whom are they doing this? Certainly, not in the Norwegian people’s interest. They are not executing the will of the people they are supposed to represent. I think we should focus more on this, but the mainstream press does not. Watch the TV program here.

The Herland Report Scandinavian news site, TV channel on YouTube and Podcasts have millions of readers/viewers yearly. It is a great place to watch interviews and read the articles of leading intellectuals, thought leaders, authors and activists from across the political spectrum. The Herland Report believes in freedom of speech and its editorial policy resides above the traditional Left vs Right paradigm which we believe has lost its relevance and ability to describe the current driving forces in Western politics.
Previous RESETT Helge Lurås vil bryte ned mediesensuren
Next Herland Report TV: Ex-ambassadør Carl Schiøtz Wibye om Saudi Arabia wahhabisme