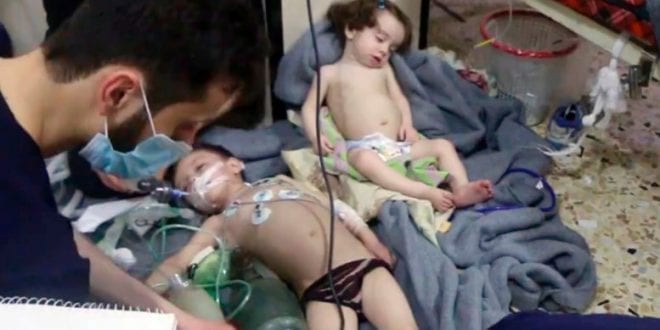 Herland Report: On Saturday, August 22nd, AugustRussia warned the US administration that the Russian authorities know all the details of the provocation that is being prepared in the province of Idlib.

Terrorists are going to simulate a chemical attack allegedly committed by Damascus, and “in response”. The British, Americans and Frenchmen will strike at Syrian targets. This is reported by The Jerusalem Post, among others, stating “Foreign specialists” have arrived in Syria and “may stage a chemical attack.”

These “specialists” might stage the attack in the next two days and “this will be filmed for international media to frame Damascus forces.”(Feature photo: From the alleged attack in Douma, Syria. FOX)

Russia’s Defense Ministry said Saturday that Syrian rebels are planning a chemical weapons attack, with the aim of blaming it on the Syrian government to provoke a military response from the West.  The ministry issued a statement quoting unnamed sources claiming that the jihadi group Levant Liberation Committee — also known as Hayat Tahrir al-Sham — is preparing an attack against civilians in Syria’s northwestern Idlib province.

Here are the details. Eight containers of chlorine gas were delivered to the terrorists by the British, trained to simulate the salvation of the victims of the chemical attack.

A few days ago, the new British Foreign Minister Jeremy Hunt flew to Washington to call Trump to hit Russia. Publicly, he talked about sanctions, but, as we see now, behind the scenes there was a talk about a missile, and not just a sanctioning strike, claims the Israeli Shamir site.

Britain threw its considerable weight on the side of the war party. Although in Russia they doubted that England would be able to convince the United States, but, apparently, London is able to convince.

The Russian Defense Ministry stated: Residents of the Syrian province of Idlib told the Russian military that in the settlement of Jisr-Ash Shugur  “White Helmets” began frame up  a provocative video, in which “a chemical attack” would be shown,

The film crews of several Middle Eastern TV channels and even one American have already arrived. According to the provocateurs’ scenario, containers with chemical agent are allegedly dumped in the village, and members of the infamous “White Helmets” group will assist the lime victims.

To be more plausible, the militants brought two barrels of chlorine-based poison into Jisr Ash-Shugur. This substance should appear in the soil samples, which will take the “White Helmets”.

Earlier it became known that the United States brought submarines and destroyers with cruise missiles to the shores of Syria. The signal for the beginning of the strike should be this fake “chemical attack.” According to American television channels, the military had already compiled a list of goals and handed it over to President Trump.

The Herland Report Scandinavian news site, TV channel on YouTube and Podcasts have millions of readers/viewers yearly. It is a great place to watch interviews and read the articles of leading intellectuals, thought leaders, authors and activists from across the political spectrum. The Herland Report believes in freedom of speech and its editorial policy resides above the traditional Left vs Right paradigm which we believe has lost its relevance and ability to describe the current driving forces in Western politics.
Previous Horrifying Militia War Crimes Libya, West is silent – Hanne Nabintu, WND
Next Tilliten til mediene stuper, det samme perspektivet i omtrent alle aviser