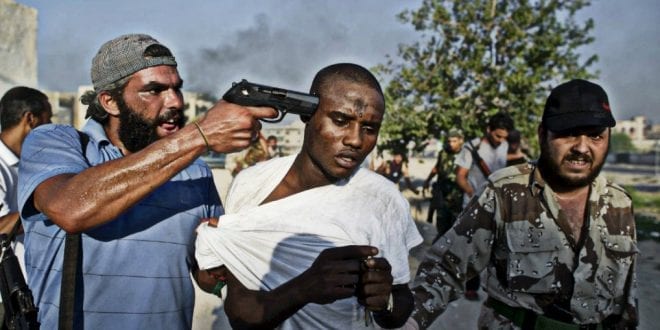 WND column: Militia War Crimes Libya: Everyone knows that the NATO led attack on Libya in 2011 produced a failed state, the Libyan 150 billion state funds looted, millions of displaced persons, a refugee epidemic that threatens to destabilize Europe and a Libya under Islamist rule.

And massive Islamist racism against the black Libyans, such as the Tawhargha tribe in Libya, who since 2011 have faced unbearable struggles, violent killings and massive looting of Libyan state funds, writes historian and author, Hanne Nabintu Herland her regular column in World Net Daily, America’s largest conservative networks.

Militia War Crimes Libya: Under the leadership of militia war lords such as Abdelhakim Belhadj (LIFG jihadi fighter, friend of Osama bin laden in Afghanistan and hailed as “hero” by John McCain) has produced a horrifying regime. The Western backed Libya is permeated by terror, random kidnappings, gruesome rapes, the most morbid form of torture – all viewable and permitted on Arabic Facebook and YouTube – and the practice of allowing civilians to spend years in prison without a trial.

Libyans are pleading for the UN, US, Amnesty, Human Rights Watch to react, to no avail. There is just a deafening silence in the West.

Humanitarian pleas, also from the UN, implore the West to take responsibility for the destruction instigated in 2011. The United Nations Support Mission in Libya (UNSMIL) steadily expresses ‘‘strong condemnation of the violence, intimidation and obstruction to the work of Libya’s sovereign institutions by militiamen”.

The Secretary-General of the UN agency for International Cooperation, Eya Essif,  addresses the racism against black Libyans, the Tawhargha. We have all heard about the slavery.

War crimes openly take place in areas controlled by militias affiliated to the internationally recognized Presidential Council in Tripoli.  A UN report says that armed groups are guilty of a wide range of abuses. The wide abuse has long been addressed.  Also by The Supreme Council of the Libyan Tribes, pointing out that many children have been left in these prisons since 2011 and up to today.

Militia War Crimes Libya: We are way beyond the 2016 UK House of Commons report which documented the media lies when the war broke out in February, 2011. Muammar Gaddafi was not “attacking his own people” or performing some sort of “genocide”. Libya was, in fact, Africa’s richest country, a middle income socialist state, 95 % literacy, free education for both men and women, with a massive Libyan Investment Fund waiting to be looted.

The Wikileaked Hillary Clinton email and other documents have shown that the assault on Libya it was not out of care for the civilians, rather the opposite: In search for the Libyan wealth and to stop the Pan African plan to skip the dollar for the Gold Dinar.

“Killings and torture are being committed by all sides in Libya, according to a UN report,” wrote the BBC back in 2016. “Human rights violations are carried out by armed groups. Victims include detainees, journalists and human rights activists.” Since then, no improvements have been carried out.

Militia War Crimes Libya: The militia leaders regularly overrule the Libyan courts and dictate the outcome of lawsuits, taking advantage of the lawlessness. This was recently seen in the Ain Zara A prison in Tripoli, where 45 young men are now awaiting the death penalty.

According to sources on the ground, the notorious war lord, Ghnewa Kikli is allegedly responsible for pushing the courts to place the death penalty on the men. The families protest in this video. The EU said the death sentence, issued by the Criminal Chamber of the Tripoli Court of Appeal, “was worrying”.

There are now pleas for the ICC courts to indite Haitam Al Tajouri and the militia leader in question regarding the 45 condemned men, Ghnewa al Kikli, as well as Tripoli’s notorious war lord Hashim Bishir, Osama Al Jwilli and Al Raouff Kara. The aim is to stop the militia rule of terror in Libya.

Militia War Crimes Libya: Reports on the ground state that there are at least 30 000 prisoners in Libya, most of them former supporters of Gaddafi, that are incarcerated without law and order, and many in prison since 2011. There are women as old as 80 years, and children as young as 15. One of Gaddafi’s sons, Saadi el-Gaddafi is still in prison even if the courts acquitted him.

Hannibal Gaddafi is still incarcerated in Lebanon, Gaddafi’s wife, Safia Farkash and daugher, Aisha Gaddafi still unable to use their frozen bank accounts or to travel. Since when was it a crime to be a president’s wife? Or daughter? Why is the family still being punished?

President Trump recently addressed the issue with the Italian Prime Minister Giuseppe Conte. Let us hope we may soon see an end to the Libyan misery.