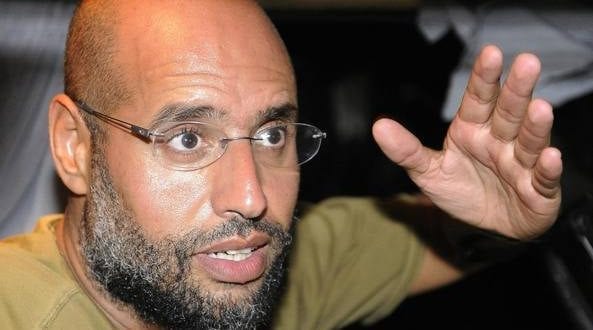 “Saif al Islam intends to take part in the Libyan National Forum that the envoy of the UN Ghassam Salame intends to organize already for next January.

A great assembly of reconciliation aimed at preparing the political elections, which should take place by the spring of 2019. It is a Libyan citizen, since 2011 has never abandoned our country. He has every right to compete to shape his future,” quotes Corriere della Serra’s Lorenzo Cremonesi, November 25, 2018.

He speaks through his trusted men, a large group of exiles, all veterans who has experienced the troubles after the fall of the regime, who now live secluded in various European and Middle Eastern locations. (Feature photo: Saif al-Islam Gaddafi, Daily Mail)

“I’m not dead, as someone falsely asserts. Nor do I withdraw into hiding and escape. Quite the contrary. We were unjustly ousted from NATO military intervention and illegal forces, which if not for foreign raids we would have easily beaten.”

“But I know that a large part of the Libyans have not forgotten us. Indeed, if the first years followed in 2011, especially after the expectations created by the 2012 elections, were not particularly favorable, now the situation has radically changed.”

“Today I feel that much of the country is with us and nostalgically recalls the order and reforms especially of the first decade of the new millennium».

Saif al Islam Gaddafi informs us through the team of his political and official advisors of the old regime we met in Rome, where they try to resume contacts and propose solutions in the belief that Italy could give a hand, writes Corriere della Serra.

At the same time, communication channels have been established with the European summits in Brussels and with the United Nations.

For the first time since his capture in November of seven years ago by the Zintan militia, in the middle of the desert near the border with Niger, the most “political” son of the barbarously lynched Colonel in Sirte speaks with the Western press.

He speaks through his trusted men, a large group of exiles, all veterans who have experienced the troubles after the fall of the regime, who now live secluded in various European and Middle Eastern locations. With Saif, remaining discreetly and living in a secluded area around Zintan, I am in constant contact.

“There’s an obvious security problem. Saif is careful. In 2016 the judges of the court of Zintan released him on the basis of the amnesty law, but must move with caution. We must also work to cancel the resolution of the International Court of the Hague, that in June 2011 promulgated a warrant for his arrest for crimes against humanity.”

It was an unjust accusation, Saif had little to do with the battles in progress, but it was a way to put pressure on the regime. The cancellation of the international arrest warrant does not seem impossible, it has already happened for other cases in the past for characters in Africa and Libya.

“But the heart of his message remains what he expressed during the interview with Corriere della Serra in 2011: restarting the national dialogue between all the components of Libyan society. Then he proposed free elections monitored by the international community. It was not heard and the country slipped into violent chaos. We hope today is different », they explain.

Meeting in Tripoli could be a problem for Khalifa Haftar and the leaders of the Eastern regions. And the same would be for Benghazi or Tobruk, where those from the Western regions might feel in danger. So better a place in the desert, where it would be easier to guarantee control and access.

It seems obvious that Gaddafi’s successor intends to prepare the ground for his candidacy for the elections and become an integral part of “national reconciliation” to finally emerge from the chaos of a war that has never really ended.

Read the full article in Italian at Corriere della Serra.