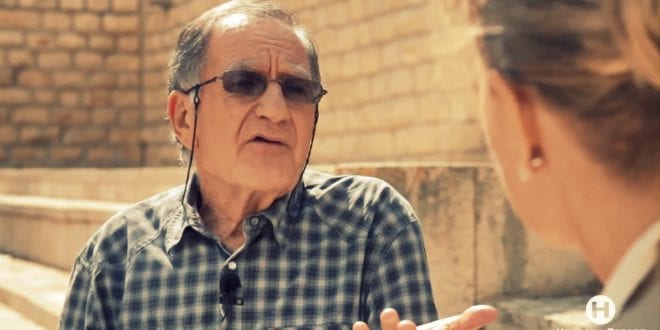 Herland Report TV: We sat down with Dr. Raphael Israeli, the man who invented the term “Islamikaze”,Professor of Middle Eastern, Islamic and Chinese history at the Hebrew University of Jerusalem, fellow at Truman Institute for the Advancement of Peace and the Jerusalem Center for Public Affairs.

He is one of the front experts on the self-sacrifice method in Islam, the concept of the Martyr, known in the West as suicide-bombing.

Dr. Israeli explains his view on the jihadi method and the religious explanations behind the phenomenon, and adresses the dire need for Europeans to wake up and understand the dangers of the steadily growing parallell societies in Europe. Watch the new Herland Report TV show here.

“There is an attitude of wishful thinking when Westerners believe that everyone else in the world wants to become like them,” says Dr. Raphael Israeli.

He is a Professor of Middle Eastern, Islamic and Chinese history at the Hebrew University of Jerusalem, fellow at Truman Institute for the Advancement of Peace and the Jerusalem Center for Public Affairs.

Dr. Israeli says: “We have two different mentalities, two different consciousness that are growing in the same society. We have two cultures. It is not multiculturalism, it is anti-culturalism. People who do not understand the basic values of Europe, which has developed under Christianity the last two thousand years, they come in the last fifty years and want to reverse everything.”

“If you dare to resist the reversal, you are instantly called a racist because you do not respect the Islamist values. It is a certain way of thinking that the Europeans simply do not understand.”

“There are more Muslims going to the mosques in London, Amsterdam, Lille on Fridays than Christians going to churches on Sundays. Already we have this situation. To be religious has become a sin, it is not fashionable anymore.”

“This is also the reason why Europeans don’t breed anymore. They have one child pr. family, even Spain and Italy which are Catholic. They used to have the highest birth rate in Europe, now have 1.5, which means they cannot maintain the same level of population.” “You do not have many children when you don’t think that life is worth living or fighting for. They say, joking of course, that if European family has a child it is only for the dog or the cat to have somebody to play with. It is very sad.”

“The young foreigners who grow up in Europe, were permitted in the name of multiculturalism to go to schools in Urdu, Arabic and so on, paid by the government. Besides they get education in madrasas – Sunday schools which is religious Muslim and so on. They are taught to respect the original culture of their country.”

“For example, I was in Sweden to write a book and they have every Sunday a market. I went there and spoke Arabic to them and asked how they enjoyed Sweden. They said “yes, we have all facilities, welfare, food, jobs, but only one problem. Now I am a Swede and I cannot take the Swedish flag, which has a cross in it, as my national flag. I cannot accept it.”

I told him: “What do you want? You come here, they give you all these goodies, and you want to oblige them to change their national flag?”

Dr. Israeli is famous for his books on Islamikaze. We also discussed why the term “suicide bomber” is not good, as “self-sacrifice” is a better term, since it is not regarded as a suicide but self-sacrifice in Islamic culture, as suicide is forbidden in Islam.

It is rather an ultimate weapon to hurt the enemy and giving your life in the same instant. “The prevailing motive is not to kill oneself, but the damage that may be done to others, even if in that process they lose their own lives.”