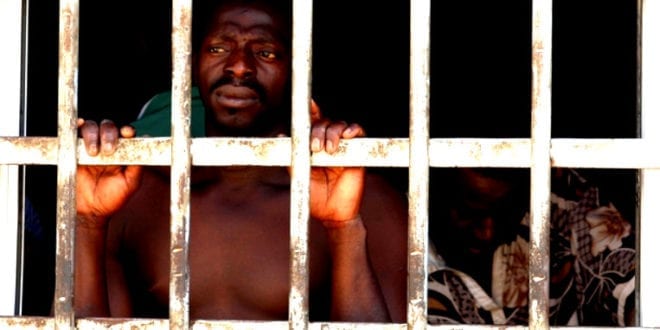 African migrants suffer in Libya: Thousands of migrants displaced by fighting on Libya’s northwestern coast are in urgent need of medical help, the head of a detention centre in the town of Gharyan said on Thursday, describing their situation as “tragic”, reports Middle East Eye.

“About 5,800 migrants have arrived at the centre since fighting broke out last month in the coastal city of Sabratha, previously a launch pad for crossings to Italy. About 2,000 people have already been sent on from Gharyan to other centres in the capital, Tripoli.

“The situation is very tragic…disastrous. There’s a lack of support,” said Abdulhameed Muftah, who runs al-Hamra dentition centre in Gharyan, about 80km south of Tripoli.

The clashes in Sabratha resulted in the withdrawal of the Anas al-Dabbashi brigade, an armed group that said it had begun blocking migrant departures from Sabratha under intense pressure from Italy. Sabratha was previously the foremost smuggling hub for migrants attempting to cross the Mediterranean.

Many have been taken to centres such as the one in Gharyan, which are nominally controlled by the UN-backed government, but notorious for widespread abuse and poor conditions. Humanitarian workers have limited access.” Read full article in Middle East Eye.