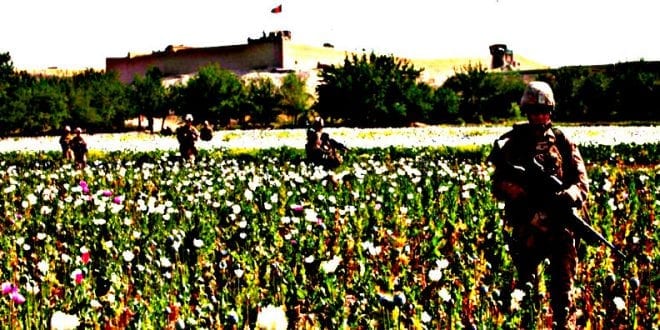 War to protect the Drug Industry, Protecting Afghan Opium? It is well-documented that the U.S. government has – at least at some times in some parts of the world – protected drug operations, states Global Research.

Do American banks also launder money for drug cartels? See this, this, this and this. Indeed, drug dealers kept the banking system afloat during the depths of the 2008 financial crisis. And the industry money laundering is allegedly continuing to this day.

War to protect the Drug Industry, Protecting Afghan Opium?  Opium production in Afghanistan has been on the rise since U.S. occupation started in 2001. Indeed, a brand new report from the United Nations finds that opium production is at an all-time high.

The cultivation of opium poppy in Afghanistan—a nation under the military control of US and NATO forces for more than twelve years—has risen to an all-time high, according to the 2013 Afghanistan Opium Survey released Wednesday by the United Nations.

According to the report, cultivation of poppy across the war-torn nation rose 36 per cent in 2013 and total opium production amounted to 5,500 tons, up by almost a half since 2012.

War to protect the Drug Industry, Protecting Afghan Opium?  “This has never been witnessed before in the history of Afghanistan,” said Jean-Luc Lemahieu, the outgoing leader of the Afghanistan office of the United Nations Office on Drugs and Crime, which produced the report.

The U.S. military has allowed poppy cultivation to continue in order to appease farmers and government officials involved with the drug trade who might otherwise turn against the Afghan Karzai government in Kabul.

Fuelling both sides, in fact, the opium and heroin industry is both a product of the war and an essential source for continued conflict.

Public Intelligence has published a series of photographs showing American – and U.S.-trained Afghan – troops patrolling poppy fields in Afghanistan. Public Intelligence informs us that all of the photos are in the public domain, and not subject to copyright, and they assured me that I have every right to reproduce them.