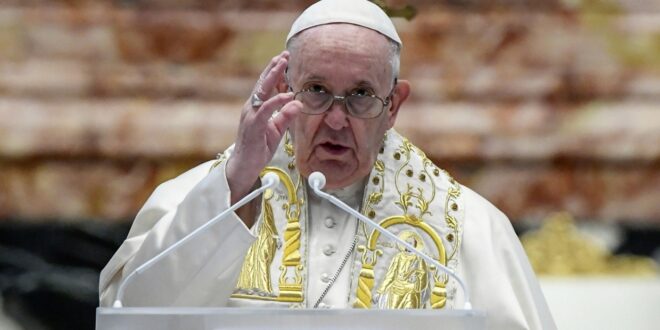 Herland Report: As the Easter Virgil service took place in the Vatican, with only 200 masked people present in an unprecedented shutdown of the Catholic Easter celebrations in Rome, Pope Francis spoke about the horrendous conflicts in Syria, Yemen, and Libya, imploring for an end to the “clash of arms”.

He called it scandalous that “armed conflicts have not ended and military arsenals are being strengthened. There are still too many wars and too much violence in the world! May the Lord, who is our peace, help us to overcome the mindset of war.”

The Pope spoke specifically about the military conflicts in Yemen, the suffering country of Libya and the ongoing escalation in Syria: “May Christ our peace finally bring an end to the clash of arms in beloved and war-torn Syria,” and in Yemen, “whose situation has met with a deafening and scandalous silence.”

“May he inspire world leaders to curb the race for new weaponry,” Francis continued, denouncing the “insidious and horrible” landmines, saying, “how much better our world would be without these instruments of death.”

He prayed for those who have experienced hardship as a result of the Covid-19 virus situation, with strong words for the rich to help the poor.

“The pandemic is still spreading, while the social and economic crisis remains severe, especially for the poor. Nonetheless – and this is scandalous – armed conflicts have not ended and military arsenals are being strengthened,” he said.

Pope Francis recently made a historic trip to Iraq, the first Pope to ever visit the country. He did so despite of the safety concerns and said he was visiting “as a penitent pilgrim, to implore from the Lord forgiveness and reconciliation after years of war and terrorism.”

His visit was viewed as a support for the suffering Christian minority in Iraq, a country that used to have over a million Christians. Many of its Christian minority have fled to Argentina and South America, others to the West, the remnants now counting less than 200 000 persons, according to the UN.

A recent article in The Atlantic by reporter Emma Green describes the plight of Iraq’s Chaldean Catholic community and the incredible pressure that they have been under since the fall of Saddam. This not only includes ISIS’s reign of terror, but day-to-day discrimination against Christians that is causing so many to seek to leave the country.

The end result of the massive military conflicts in recent years in the Middle East, has been displacement of many minorities, among them the region’s Christian communities. As we all know, the Middle East were Christian lands before the Muslim conquest, and Christian minorities have continued to live in this area, under the Islamic dominion.

The current ongoing military actions have detrimentally worsened the conditions for Christian Arabs and Middle Easterners, causing a massive plight often described as the genocide of Christians in these regions. This is, of course, hardly covered in the mainstream Western media.

The Pontiff has a long history of addressing the plight of Christians in the Middle East:

In 2015, he wished courage and warmth for the world in his Christmas Eve mass homily, as God is stronger than “darkness and corruption,” RT reported at the time.

He also made a phone call to Iraqi refugees who fled ISIS violence, saying that they are “like Jesus” on this night.

Religion News reports Pope Francis’ words to Iraqi Christians during the trip to the country: “Now is the time to rebuild and to start afresh, relying on the grace of God, who guides the destinies of all individuals and peoples,” the pope said in Qaraqosh, a Christian town in Iraq’s Nineveh Plains, on Sunday (March 7).

“You are not alone! The entire church is close to you, with prayers and concrete charity. And in this region, so many people opened their doors to you in time of need,” Francis said.

Francis, the first-ever pontiff to visit Iraq, has promoted a message of religious dialogue, tolerance and peace. Christians in the Nineveh Plains, the religiously diverse area east and northeast of the city of Mosul that is sometimes called “the cradle of Christianity,” suffered greatly when IS rose to power in 2014. Churches and places of worship were destroyed, and thousands of people were forced to leave their homes.”

Pope Francis’ Easter Virgil speech and trip to Iraq: Also check out these topics at CNN or FOX News. Other sources may be New York Times, USA Today, the Washington Post or from the British angle, BBC, The Guardian, The Telegraph or Financial Times.

Previous Good-bye Liberty as America enters Years of Humiliation
Next The Protestant and Catholic Church: From Division to Communion Vatican II