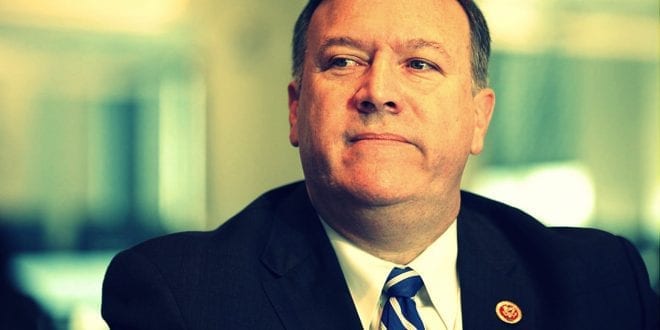 Herland Report: Secretary of State Mike Pompeo recently recounted to an audience at Texas A&M University that when he was head of the Central Intelligence Agency he was responsible for “lying, cheating and stealing” to benefit the United States:

“Like we had entire training courses. It reminds you of the glory of the American experiment,” writes Dr. Phil Giraldi,.

He is a former counter-terrorism specialist and military intelligence officer in the US Central Intelligence Agency, a columnist and television commentator who is the Executive Director fot he Council for the National Interest.

One of the really interesting things about fanatics like Pompeo and his dos amigos Vice President Mike Pence and National Security Advisor John Bolton is how they are unable to figure out what comes next after the “lying, cheating, stealing” and shooting are over.

The Secretary made the comment with a grin, noting that when he was a cadet at West Point he subscribed to the Academy honor code, which stated that “You will not lie, cheat, or steal or tolerate those who do.”

The largely student audience clearly appreciated and irony and laughed and applauded, though it is not clear what they made of the “glory of the American experiment.”

The normally humorless Pompeo was suggesting ironically that yesterday’s Pompeo would be required to turn today’s Pompeo into the appropriate authorities for lying and also conniving at high crimes and misdemeanors while at the Agency.

Certainly, some might find Pompeo’s admission a bit lame though perhaps understandable as he arrived at CIA without any experience in intelligence.

Someone should have whispered in his ear, “That is what spy agencies do Mike.” And if he found the moral ambiguities vexing, he should have turned down the job.

Equally lame has been the international media coverage of the comments (it was not reported in any major national news outlet in the US) which reflected both shock and vindication at finding a top-level official who would admit that Washington does all that sort of nasty stuff.

And Pompeo is not alone in his doing what would have hitherto been unthinkable as many senior figures in the Trump Administration who have sworn an oath to uphold the Constitution now find themselves conniving at starting various wars without the constitutionally required declaration of war from Congress.

Pompeo has personally assured both the Venezuelans and Iranians that “all options are on the table,” while also arming the Ukrainians and warning the Russians to get out of Caracas or else face the consequences.

And it is a good thing that he has now learned how to lie as he does so when he keeps insisting that the Iranians are the leading state sponsors of terrorism or that the Saudis are fighting a just war in Yemen.

And then there is the ethical dimension. The United States government is already involved in economic acts of war through use of its sanctions worldwide. It is currently dedicated to starving the Iranian and Venezuelan people to force them to change their governments.

This week, a global boycott of Iranian oil sales to be enforced unilaterally by Washington kicks in with the objective, per Pompeo, of reducing “Iran’s oil exports to zero” to deny its government its “principal source of revenue.”

The problem with the Pompeo objective is that attacking a foreign government normally rallies the people around their leadership.

Also, denying a country income ultimately hurts ordinary people much more than it does those who make the decisions.

One recalls the famous Madeleine Albright line about killing 500,000 Iraqi children through malnutrition and disease brought about by sanctions as “being worth it.”

Pompeo believes himself to be a good Christian. Indeed, a very good Christian in that he believes that the second coming of Jesus Christ is imminent and by virtue of his good deeds he will be saved and “raptured” directly to heaven.

He, like Vice President Mike Pence, is referred to as a Dispensationalist, and he also believes that those who are not “born again” and accept Jesus will be doomed to hell. Most Dispensationalists think that the second coming will be preceded by a world war centered in the Middle East referred to as Armageddon, which will pit good against evil.

How that shapes Pompeo’s thinking vis-à-vis encouraging a major armed conflict with Iran is certainly something that war-weary Americans should be considering.

One of the really interesting things about fanatics like Pompeo and his dos amigos Vice President Mike Pence and National Security Advisor John Bolton is how they are unable to figure out what comes next after the “lying, cheating, stealing” and shooting are over.

After American air and naval power destroy Iran, what comes next? If Iraq and Afghanistan are anything to go by, “next” will be kind of figured out as one goes along. And as for an end game, fuggedaboutit.

Now let us suppose that with the crushing of the Mullahs all the requirements for Armageddon will be met and Jesus Christ makes his second appearance, what happens after that when the world as we know it ends?

Presumably the rapture itself is painless but when Pompeo and Pence arrive at heaven what will they do all day? Play cards?

There will be no television one presumes and no Muslims or Latinos to kick around as they will all be in hell. Drinking and smoking are probably not allowed and acquiring a girlfriend will likely be discouraged. One suspects that engaging in philosophical symposia to pass one’s time is not particularly favored by either gentleman.

Perhaps Pompeo and Pence look forward to something like the Mormon model, where they and their extended families going back genetically to the Pleistocene period will have their own planets where they can sit around and hobnob all day long. God, who, according to the Mormons, also has his own planet called Kolob, might just pop by for a visit every once in a while.

The point of all this is that we Americans are in the hands of a group of people who are adept at self- deception and who are also quite capable of doing some very dangerous things in light of their religious and personal views.

It is one thing to have a strong foreign policy defending actual American interests but it is quite another to have a propensity to go to war to satisfy a personal predilection about how one goes about enabling a biblical prophecy.

Equally, having a moral compass that is flexible depending who is on the receiving end is like having no real morals at all.

We have reached a point here in the United States where bad decisions and behavior best described as evil are masked by a certain kind of expressed piety and visions of national greatness.

It is time to get rid of the Pompeos and Pences to end the charade and restore genuine morality unencumbered by the book of Revelations together with a national dignity that is not linked to threats or projection of military power.

Dr. Phil M. Giraldi, is the
Executive Director of the Council for the National Interest, that seeks a more interests-based U.S. foreign policy in the Middle East. He is a former counter-terrorism specialist and military intelligence officer in the US Central Intelligence Agency, a columnist and television commentator. He spent over twenty years overseas in Europe and the Middle East working terrorism cases and holds a BA with honors from the University of Chicago, an MA and PhD in Modern History from the University of London.