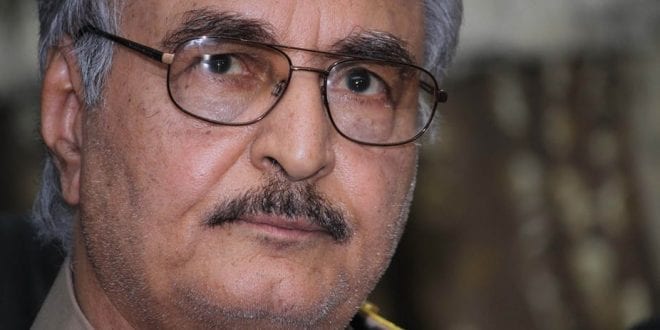 US citizen Khalifa Haftar and Russian ally is doomed to fail

Herland Report: Sasha Toperich:  US citizen and long term CIA operative Khalifa Haftar, has been a player on the Libya scene ever since he moved from the US in 2011 to join the NATO war.

But it is hard to win a war without the support of the Libyan Tribes, who basically constitute the Libyan civil society.

With the current support of the Russians, France, Egypt, Qatar and other nations, the scramble for power in Libya took a new turn when Haftar attacked Tripoli a few weeks ago.

He might have underestimated the resilience of the Tripoli tribes and Misrata, as well as the determination of the US, Italy and others’ (Turkey, Algeria) support for the Tripoli government led by Fayez al-Sarraj, who steadily controls most of the Libyan national assets.

Read excerpts below from the analysis of executive vice president of the Transatlantic Leadership Network, Sasha Toperich article for The Hill.

Khalifa Haftar, the renegade Libyan general, took many world leaders and most experts by surprise when he attacked Tripoli on April 4.

Now, weeks later and with his forces confronted by a determined resistance, Haftar’s high-stakes gamble may soon prove to be a colossal mistake, writes Toperich for The Hill. (Feature photo: Khalifa Haftar. EPA)

His advance on the capital city now faces the daunting threat of urban warfare against a motivated force of rival militias unified by their hatred of the ambitious general.

What lay in front of him is a formidable military and political challenge: a long, costly campaign fought house-by-house in Tripoli’s densely populated streets. Every Libyan and military expert will tell you this is a fight he is unlikely to win.

The United States and the international community used to view Haftar and his Libyan National Army (LNA) as part of the solution for Libya.

However, even with a possible endorsement by President Trump following a phone call between the two, and even with backing from Saudi Arabia, United Arab Emirates, Egypt and France, it is hard to see how Haftar can become a unifier or claim victory.

Haftar understood well that the only way he can rule the country is to first label himself as a deliverer of stability to the war-torn country.

His LNA did eliminateAnsar Al-Sharia, a U.S.-designated terrorist group. This raised his profile among critical western elites who saw the general as someone who could deal a blow to ISIS.

But Haftar had other plans. Claims that he destroyed ISIS are simply wrong. In fact, Haftar gave free passage to ISIS fighters from Derna to Sirte, a trip of some 450 miles through the Oil Crescent area which he controls.

It was the Government of National Accord (GNA) based in Tripoli with help of the United States, that actually defeated ISIS in fierce battles lasting months in 2016.

Fighters mainly from Misrata lost over 700 people in heavy fighting to eliminate ISIS from their stronghold in Sirte. ISIS fighters fled into the desert when safe passage was given to women, children and citizens trapped in the city.

Haftar re-asserted this concocted image of strength last June when he repelled an attack by Ibrahin Jadhran, a blacklisted militia leader who guarded the Ras Lanuf and Al-Sidra oil terminals with his Petroleum Facility Guard company after the 2011 revolution. Jadhran’s attack not only killed scores, it led to millions in losses for the oil industry.

The world was relieved after Haftar regained control of the oil terminals, bringing back stability in oil markets, but he provoked outrage when he decided to sell the oil from a company under his own control, rather than through the internationally-recognized National Oil Corporation (NOC) based in Tripoli.

He eventually backed off, but raised the prospect that Haftar might defy the international community and attempt to assert control and establish military rule in Libya.

Now, it is difficult to view Haftar’s earlier promises and actions as little more than public relations stunts to win national and international sympathy, or an attempt to barter for further control.

Haftar would address stability and extremists — but only if doing so would increase his power and control over the country.

His actions against extremists were calculated and well-timed with plenty of balancing acts, logistics, and political support from key backers: the UAE, France and Russia, and lately Saudi Arabia.

Haftar needs considerable help to recruit fighters and mercenaries from abroad as he was unable to recruit enough Libyans to his army.

Within Haftar’s LNA there are followers of radical Saudi cleric Rabea al Madhali, radical Justice and Equality Party fighters from Sudan, and the Awliaa Aldum (Blood Guardians) — a Salafist Wahabi militia that follows the same radical Saudi clerics from which grew Al-Qaeda and ISIS.

Like Gadhafi, Haftar placed two of his sons, Saddam and Khalid, into key military positions within the LNA, expeditiously promoting them to higher ranks. They are feared and loathed in the east.

Saddam is accused of staging the biggest bank theft in the history of Libya when he raided a bank in Benghazi. Libyans are wary of Haftar’s attentions as they see the 75-year-old transferring power to his sons, as Gaddafi was planning to do.

Haftar understood that time was running out for him to assert control over the entire country, so he launched his attack on Tripoli, betraying carefully planned, UN-backed efforts for reconciliation leading to elections.

Haftar has overplayed his hand and miscalculated the strong resilience of Tripoli and Misrata. If he continues his military campaign, he risks destroying the historic city of over 1 million people. Read the full article here.